Mormons in Mexico: A brief history of polygamy, cartel violence and faith

Mormons in Mexico: A brief history of polygamy, cartel violence and faith 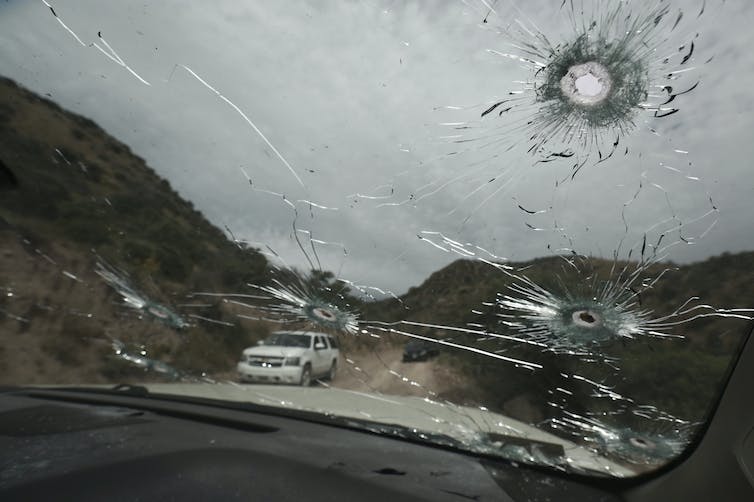 Bullet-riddled vehicles that members of the LeBaron family were traveling in sit parked on a dirt road near Bavispe, at the Sonora-Chihuahua border, Mexico, Nov 6, 2019. AP Photo/Christian Chavez

Nine members of a prominent Mormon family in northern Mexico, all women and children, were gunned down on Nov. 4 in territory whose control is disputed by the Sinaloa Cartel and the La Linea militia.

Mexico, which has experienced high crime for over a decade, has seen violence surge in recent weeks. On Oct. 17, a shootout in the city of Culiacan involving the Sinaloa Cartel led officials to release from custody Ovidio Guzman, the son of jailed drug kingpin Joaquin “El Chapo” Guzman.

In the context of so much bloodshed, the LeBaron killings are both highly unusual and tragically quotidian.

Unlike most murder victims in Mexico, the LeBarons are U.S. citizens and Mormons – part of a religious community that broke away from Utah’s Church of Latter-Day Saints years ago. But, as many Mexican journalists have written, the peace activism of family member Julián LeBaron could also have made his community a target. And the LeBarons have a history of violent encounters with organized crime.

In my 2018 book on American- and Canadian-based religious enclaves in Mexico, I researched the Latter-Day Saints community and the LeBaron Mormons of Chihuahua state, near the U.S. border. Typically, these communities’ members are somewhat reluctant to talk to outsiders, beyond proselytizing.

But as a person of Mennonite background with relatives in Mennonite colonies in Mexico, I was able to interview members of the Church of Jesus Christ of Latter-Day Saints – the official name of the mainstream Mormon church – in northern Mexico.

Along with the Romneys – relatives of Sen. Mitt Romney, whose father was born in Mexico – the LeBarons are among the most storied families in Mormon history.

Members of Utah’s Latter-Day Saints community emigrated to Mexico in the 1880s to follow their religious beliefs by living in polygamous families, which was illegal in the United States. Polygamy was illegal in Mexico, too, but the government there offered a flexible definition of family and did not enforce its anti-polygamy laws.

Alma “Dayer” LeBaron, the patriarch, was born in 1886 and grew up as a Latter-Day Saint in Colonia Dublán, Chihuahua. In 1904, he married a women from nearby Colonia Juárez. She left him when he sought a polygamous marriage.

LeBaron fled the Mexican Revolution for Utah in 1912, where he married two women – Maude McDonald and Onie Jones – and had what’s been described as “a large family of sons.”

LeBaron and his big family returned to Mexico in 1924 to find that their Latter-Day Saint neighbors did not welcome their polygamy. So LeBaron established his own colony, called LeBaron, in Chihuahua, Mexico. Today it stretches approximately six miles along a municipal highway and is four miles wide, surrounded by fields. LeBaron also began his own Mormon church.

For 50 years, the LeBarons migrated back and forth across the Mexico-U.S. border, with Alma’s sons serving as missionaries evangelizing on behalf of the Church of Jesus Christ of Latter-Day Saints.

But the community struggled with poverty and, starting in the 1970s, ran into land conflicts with a nearby farming community that had been granted land by the government after the Mexican Revolution.

The LeBaron colony’s land may have been illegally purchased from this neighboring land grant. Area peasants called the LeBarons “American invaders” and destroyed their fences. This allowed cattle into the LeBaron’s fields, damaging their crops.

Judges in Mexico, however, sided with the LeBarons, whom they saw as productive members of the local economy. The land clashes between Mormon and Mexican ranchers have largely dissipated, though a flare-up occurred just last year.

After Alma Dayer LeBaron died in 1951, his sons – Joel, Ross, Ervil and Verlan – disagreed over the future of the church Alma had established, leading to violence within the family and the formation of new fundamentalist groups.

Ervil LeBaron was arrested and convicted for the 1972 murder of his brother Joel. That verdict was later overturned, but in 1981, a Utah court convicted Ervil of a different murder. He died in prison in 1981.

Members of this community report enduring beatings, underage marriage and other abuse, as the escapee Anna LeBaron recounts in her 2017 memoir “The Polygamist’s Daughter.” 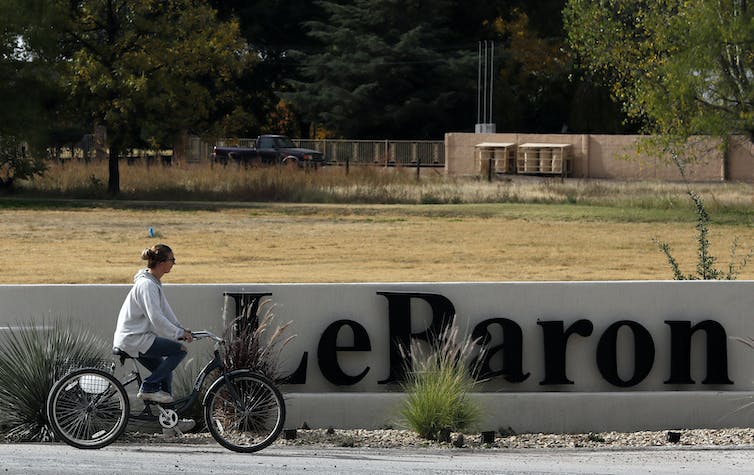 The LeBarons have also been victims of violence. In 2009, 16-year-old Eric LeBaron was kidnapped by drug traffickers. His family successfully lobbied the government for help and secured his release. In retaliation, a cartel killed Eric LeBaron’s brother Benjamín LeBaron and brother-in-law Luis Widmar in 2011.

Frustrated by violence, another brother, Julián LeBaron, that year joined a high-profile peace movement founded by the poet Javier Sicilia.

LeBaron and Sicilia reportedly fell out in 2012. But after the murder of Julián’s cousin and other family members on Nov. 4, Sicilia wrote a condolence letter encouraging Julián to “uncover the barbaric reality.”

As their peace activism shows, the LeBarons are more integrated in Mexican society than other religious minority groups I’ve studied. 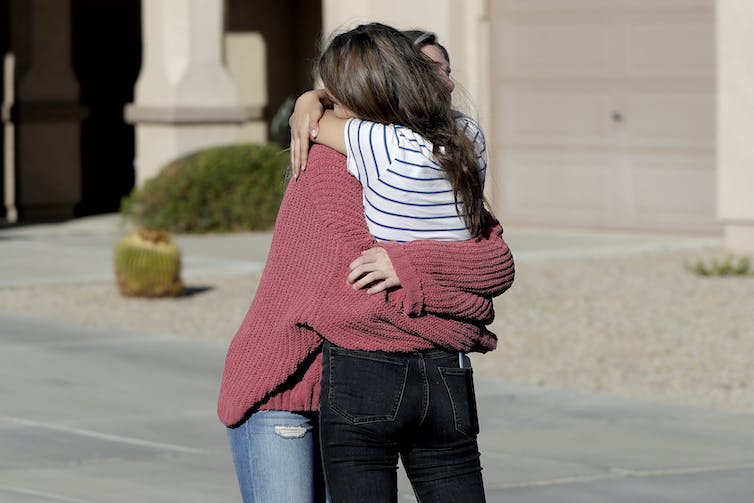 An American relative of some of the Latter-Day Saints killed in Chihuahua is comforted by a neighbor in Queen Creek, Ariz., Nov. 5, 2019. AP Photo/Matt York

The LeBarons have long sought connections with fellow Mexicans to proselytize about their beliefs. And 39-year-old Alex LeBaron, from this community, has worked for the government of Chihuahua. From 2015 to 2018, he was even an elected official. Alex LeBaron also married a Mexican woman, Brenda Ríos, in a Catholic ceremony.

Like other northern Mexicans, the LeBarons are a thoroughly cross-border community. Much of their purchasing power in Mexico comes from remittances sent by male relatives who work in the U.S.

Like their neighbors, too, the LeBarons are vulnerable to the violence that surrounds them. Mexico’s death toll in 2019 is on pace to exceed the 33,341 murders seen in 2018. In spite of a new National Guard established to fight crime, last year was Mexico’s deadliest year since modern record-keeping began.

Violence in Chihuahua state, where homicides had dropped markedly in recent years is rebounding.

So the LeBarons may have an uncommon backstory. But from kidnappings to gruesome murders, they share a familiarity with tragedy that far too many Mexicans know far too well.