Over the Rainbow to Oz Once Again with Judy 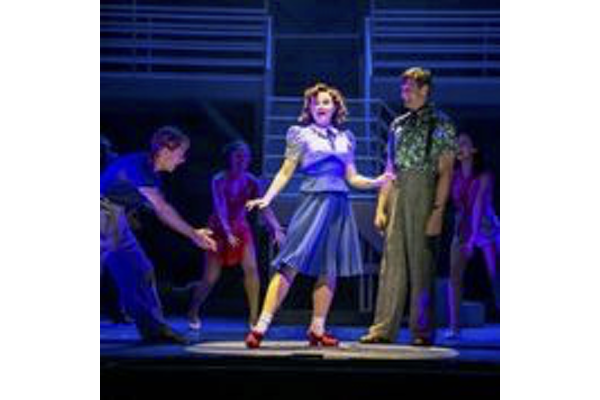 The Wizard of Oz, that 1939 classic movie, remains one of America’s most popular films and its star, teen Judy Garland, one of our most beloved actresses. What happened to Judy before the movie that launched her career at age 15, though? Was it a typical Hollywood success story? Something different? Mystery?

Now the story is being told in a bright, cheerful new musical, Chasing Rainbows, the Road to Oz, that opened last week at the Paper Mill Playhouse in Millburn, New Jersey.

The charming show stars Ruby Rakos as Dorothy (Judy’s real name was Frances Gumm), who is nothing short of sensational as Judy, who danced through Oz with the Lion, the Tin Man and Scarecrow. Rakos is not only a delightful actress, but has a knock out, hold on to your hat voice. She’s loud and proud and when she sings she wakes up people in Canada.

Chasing Rainbows is Judy’s story from the age of ten or so to the making of the marvelous movie. She is the daughter of a very pushy and greedy stage mother, Ethel Gumm. Like many moms of the era, Ethel travels around on the vaudeville theater circuit with her kids and husband Frank. Wanting more, she settles in Hollywood and shoves the kids into the movies. She leaves Frank, a rock solid, Judy loving dad, back home as she settles in her new home in Hollywood. The girls miss Dad, he misses them and they eventually hook up.

Frances Gumm changes her name to Judy Garland, as so many performers changed their names in those days and goes to MGM. Nobody there likes the teenager. From studio head L.B. Mayer on down, they all think she is ugly, too heavy, sings too loud and does not fit in with all the other young actresses whom Mayer considers his stars. Judy calls them all “dolls.” She perseveres and is befriended by Mayer’s secretary, Kay Koverman, who continually pushes for roles.

She does not get them. Everybody else becomes famous and Judy winds up as just a singer on a studio radio show with a tiny audience.

A lot transpires. Her parents drop off (long story there), others in the studio grab roles she wanted, such as little Shirley Temple, and Judy is distraught. Even sort-of boyfriend Mickey Rooney, with whom she will later make many movies with, can’t get her out of her funk.

All of a sudden, here comes The Wizard of Oz, a picture that Mayer produced only because he wanted to top Walt Disney’ Snow White. Judy lands the role of Dorothy and gets to sing her signature song, Somewhere Over the Rainbow, that became an American classic (a lot of people at the studio hated the song and originally cut it from the movie, but it was restored).

Her history gets battered a bit. There was a lot of tension during the Wizard. Actors came and went, as did a handful of directors. The theme was changed several times, the promotional campaign was solidified and then scrubbed. It’s hard to get through all of this in a play, but the director of Chasing Rainbows, Denis Jones, does it rather smoothly.

The show ends with the premier of the movie and you do not learn anything of Judy’s rather tragic adult life, and that’s good. This is a feel-good show about Judy and Oz in 1939 and should end with the actors off to see the Wizard. The move about Judy’s last years, Judy, is playing two blocks from the theater where I saw the play. How ironic is that?

The musical is a good one, but has its problems. First, it is way too long, nearly three hours. That’s a lot of time on the yellow brick road. The first act is nearly one and a half hours and director Jones could ax five or six songs from it. All of those songs sound the same and carry the same theme. They could go without hurting the storyline and trim the time nicely.

The whole first act is too cluttered with family business and at times you get Judy confused with other members of her family. Mom’s marriage is given little time on stage and that’s too bad. The pace of act one is a bit slow. Act two is just masterful, though. It is the story of the making of the movie and Judy’s growth as an actress, along with her relationship with Rooney. Most of the best songs are in it and the choreography, also by Jones, is delectable.

Johns gets a bravura performance from Rakos as Judy. She is electric. He also gets fine performances from Max Von Essen as dad Frank Gumm, Lesli Margherita as mom Ethel, Michael Wartellas a bouncy Mickey Rooney (who was charged, OMG, with being a bad kisser, a charge that got a laugh since Rooney was married eight times), Karen Mason as Kay Koverman. Stephen De Rosa is wonderful as the crusty, grumpy Louis B. Mayer, the movie mogul who struts about the stage and makes history with his emotions and feelings about stars and scripts.

Chasing Rainbows, although a bit long and overly tuneful, is a fine look at Hollywood history and the life of one of its great stars.