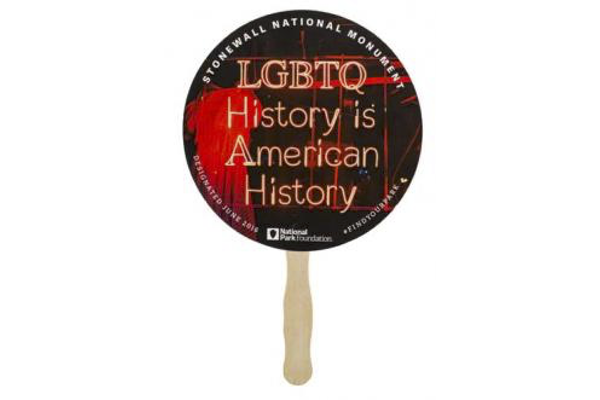 A paper fan, one of the objects at the exhibit

On the morning I went to see the museum exhibit Stonewall 50 at New York Historical Society about discrimination against gays in America, Newark Liberty Airport held its first ever drag queen show in Terminal C, with a huge crowd of cheering onlookers. New Yorkers were celebrating World Pride month. Mayor Pete Buttigieg, of South Bend, Indiana, an openly gay man, was not only running for President of the United States, but comfortably fourth in the polls. The LGBTQ organization at my University is growing and thriving. Could any of these things have happened in the summer of 1969, the summer of the fabled Stonewall riots, that gave birth to the gay movement in America?

Stonewall was a momentous event and its 50th anniversary is being celebrated in many ways across the country, including this exhibit at the New York Historical Society, W. 77th Street and Central Park West, New York.

The exhibit on Stonewall, though, needs more walls of its own. It also needs a sharper focus and a richer historical backdrop. As it stands, it is a pretty weak Stonewall itself.

You read a book on the history of the New York Yankees and it is about …the Yankees. Here, there is an exhibit about Stonewall but there is little Stonewall. There is a small mention of the club and riots, sort of an afterthought, and that’s it.

The Stonewall riots of 1969 not only shook the city to its core, but all of the country, too. It was not just an event in gay history, but American history. How can there be nothing about Stonewall in an exhibit about Stonewall? Am I missing something?

The infamous Stonewall riots began early in the morning on June 28, 1969 when a team of New York City police raided the Stonewall Inn, a small gay bar on Christopher Street, in New York’s Greenwich Village. The police burst into the bar and arrested numerous customers. The patrons, gays, did not go quietly into the night. They protested, loudly. That brought in more police. That brought in more protestors, more than 600, that shut down numerous streets, and Stonewall was quickly engaged in a riot. Fires were set, police cars nearly overturned, buildings damaged and the neighborhood trashed. The riots continued for six days. Police arrested 21 people. Much of this was captured by TV news crews and the riots, seen nationally, became infamous. They gave the gay community new strength and changed gay history in this country.

All of this drama is generally overlooked in the exhibit.

The exhibit has numerous problems. First, it is is really small, almost as small as the Stonewall Inn itself. The whole exhibit takes up just two walls and a tiny, tiny room that is really, really badly lit. That’s it. You could walk down the hall and, if you don’t look carefully, you will miss the entire exhibit and wind up in birds of America.

This is not really an exhibit about Stonewall, or even the volcanic effects of the Stonewall riots; it’s an exhibit about gay life in New York in the 1950s and 1960s. That’s fine, but the museum should not connect it to Stonewall.

There are some very witty posters in the exhibit, such as “No Lips Below the Hips” and very sad ones, such as “Lesbians Don’t Get AIDs, They Just Die from It.”

There are all sorts of protest march posters, gay magazines and even 1950s gay paperback novels, about men and women. There is a huge wall of items from the Lesbian Herstory Archives in New York There are some Lesbian “Lavender Menace” T-Shirts sprinkled throughout the exhibit.

“The Stonewall uprising…was a watershed moment in the gay rights movement and we’re proud to honor its legacy…during this 50th anniversary year,” said Dr. Louise Mirrer, President and CEO of New York Historical. “The history of New York’s LGBTQ community is integral to a more general understanding of the long struggle for civil rights on the part of LGBTQ Americans. We hope that with our Stonewall exhibition and displays, our visitors will come to appreciate the critical role played by Stonewall in helping our nation towards a more perfect union.”

The exhibit is in three sections. Letting Loose and Fighting Back: LGBTQ Nightlife Before and After Stonewall is about entertainment, particularly in clubs. It is the best of the three, by far. In it, visitors get a really good understanding of how gay clubs had to operate in the 1950s and 1960s as secret entertainment centers, and meeting places. There were dozens of them, usually with non-descript fronts. Inside there was really wild, colorful entertainment by singers and dancers, splashy floor shows and lengthy and loud drag queen extravaganzas. The exhibit highlights these in a splendid display that includes color videos of shows in clubs and marvelous miked conversations by apparently unknowing customers at the club.

The exhibit includes special guide books for newcomers to the city so they could find gay entertainment, club posters, programs, ticket stubs and even the complete architectural plans for The Saint club. Just outside the club room is an exhibit of the gay queen Rollerena, a 1970s Wall Street worker who skated to work on roller skates each day and into the gay clubs each night. There is a tribute to the cross dressing Flawless, an entertainer and club hostess (cross dressing was illegal in the United States for years).

The gay club The Blue Parrot was the centerpiece of the “bird clubs” for gays throughout town.  The very mainstream Hotel Astor had a gay club, the Matchbox.  The 82 Club was where celebrities like Judy Garland and later Liz Taylor hung out.

The exhibit explains, too, how city leaders neatly got around small items like the first amendment in policing the clubs. They invented a “disorderly persons” crime that covered all gay activity and permitted tough law enforcement of the venues. Hundreds of people were arrested for being “disorderly.”

The most interesting part of the exhibit, presented in this section, is the role the Mafia played in gay clubs. Homosexuals had nowhere else to go, so the Mob bought or controlled many of the gay clubs, including the Stonewall Inn. The Mob made a fortune and used some of them as fronts for Mafia activities. The mob paid off the police not to raid them. There was a slip up over Stonewall in 1969, though, and that miscue, it was said, led to the raid and the subsequent riots.

The entire club exhibit has a very authentic you-are-there feel to it.

By the Force of Our Presence offers highlights from the Lesbian Herstory Archives. It includes memorabilia from the life of a lesbian African American woman born in North Carolina who moved to Harlem plus numerous posters.

Say It Loud, Out and Proud: Fifty Years of Pride is a wall that contains an enormous timeline of years of gay pride parades and protest and photos of men and women, in wild costumes, who marched in the parades.

The exhibit is curated by Rebecca Klassen, Jeanne Gardner Gutierrez and Rachel Corbman.

The exhibit offers a nice look at gay life in New York, and America but, still, it needs a little bit of Stonewall because those folks at Stonewall caused a whole lot of trouble, trouble that changed history.