In 1925, a bellicose Adolf Hitler understood that he needed the power of mass persuasion to push his political ideology on the German people. Citing propaganda as an essential component of statecraft in Mein Kampf, he wrote that propaganda must “awaken the imagination of the public through an appeal to their feelings, in finding the appropriate psychological form that will arrest the attention and appeal to the hearts of the national masses.” In its early phases, the Nazi party largely depended on Hitler’s own oratory gifts and stage presence to gather more interest and support. This changed dramatically with the party’s rise to political prominence and Hitler’s partnership with chief propagandist Joseph Goebbels.

Goebbels immediately went to work weaponizing German history and mythology. In 1933, the Nazi government set up the Ministry of Propaganda with Goebbels at its helm. The Ministry identified two primary threats that needed to be brought to public attention and eliminated - so called internal enemies and external enemies of Germany and the German people. Jews, communists, Roma, homosexuals, religious groups such as Jehovah's Witnesses, and other minority groups were labeled as subversives: domestic enemies who were working actively against the country and its success. The perceived unbearable conditions of the The Treaty of Versailles and the myth of the “Stab in the Back,” were popular rallying cries and the so called historical proof in the pudding for nationalists. Propaganda was wielded like a weapon - painted in broad strokes and utilized as a means for both domestic suppression and international aggression.

Initially, the use of radio, newspapers, and even movies such as Leni Riefenstahl’s Triumph of the Will (1935) were popular vectors of transmission, but over time, less expensive visual means were also employed. Like in other parts of the world, the propaganda poster became a popular and easily mass produced misinformation tool. The striking nature of posters, coupled with psychological messaging, created an emotional response in viewers. The fact that they were unavoidable and plastered at various public locations was also a major convenience for Goebbels and the Nazi propaganda machine.

One of the most important themes which is found in Nazi propaganda posters, and Nazi propaganda in general, was the adoration of Adolf Hitler. Der Fuhrer (leader) was likened to a god-king and a messianic human representation of the will of Germany. Nazi propagandists created numerous artifacts which were not only on public display but also pushed to the private realm of Germans who were encouraged to harbor artifacts of Hitler. The phrase “Ein Volk, ein Reich, ein Fuhrer,” (One people, one empire, one leader) was embedded in the minds of the people and pushed across various mediums to cement the idea that the party was in complete charge of the German state and its people. 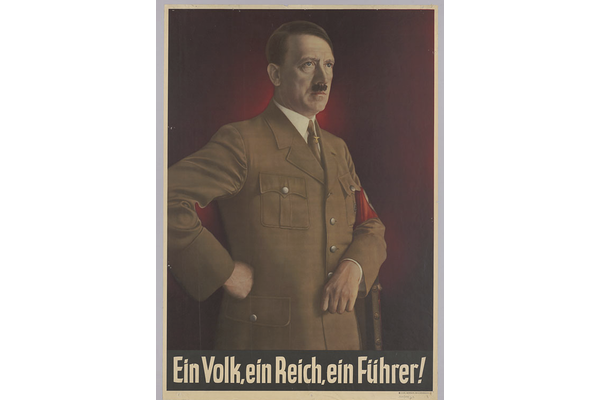 Obsessed with imagery based around a national community, the Nazis utilized artists to create emotionally stirring and provocative pieces of art. To strengthen the idea of domestic enemies, the vilification of Jews was one of the most common themes in Nazi propaganda posters. Jews were often depicted as blood thirsty demons, feeding on pure-blooded Germans, portrayed as Bolshevik infiltrators,  a plague upon the land, or puppet masters secretly controlling the levers of power across national borders, especially in the economic sectors. This vile dehumanization used various motifs to encapsulate the Nazi ideology.

Many posters focused less on vilification, and more on the glorification of the Aryan body, and the idea of a pure blooded society. Aryan superiority was showcased through triumphant imagery of the unrealistically strong and perfect  male and female body . Often, so-called subhuman classes of people were also drawn to highlight the natural inferiority to the Aryan. Jews were further racialized in this way with caricature style depictions such as overly large noses and claws instead of hands. The Nazi obsession with family and the roles of men and women were also intertwined with encapsulations of what constituted the perfect German individual, and in turn, the German population as a whole. The Nazis strongly believed in the traditional roles of men and women.This was closely linked to the Nazi ideology of a Volksgemeinschaft (national community) which transcended class and religious differences to create a sense of racial comradery and national pride. 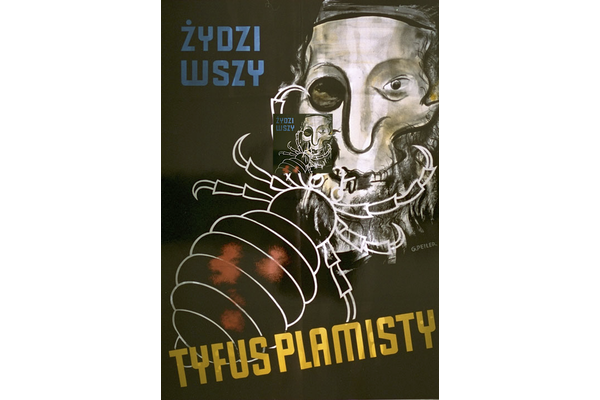 Nazi propagandists naturally needed to sell their military aggression to the civilians at home. Weary and exhausted from World War I, the German public was in no mood for the triumphalism of war on the eve of the invasion of Poland in 1939. Propagandists turned to the idea of defining wars of aggression as “self-defense” and territorial acquisition which was completely necessary and justified for the preservation of the Aryan race. Upon reaching the age of 18, boys were required to join military service or the Reich Labor Service. Recruitment posters claimed that military service was for “freedom and life.”

Propaganda extended into other realms of everyday life as well, including education. Students were routinely encouraged to become the Fuhrer’s “little propagandists,” at every turn. Educators were expected to join the National Socialist Teachers League and by 1936, close to 97% did - one of the highest percentages in any profession in the country. Boys and girls between the ages of 10 and 17 were expected to join the Hitler Youth. Originally established as a youth training program to prepare young men to become a part of the Sturmabteilung (SA), it morphed into an mandatory after school program to mold children to be faithful to the Nazi party and to the Nazi leadership. A popular poster from the time reads - “Leader - all 10 year olds into the Hitler Youth.” 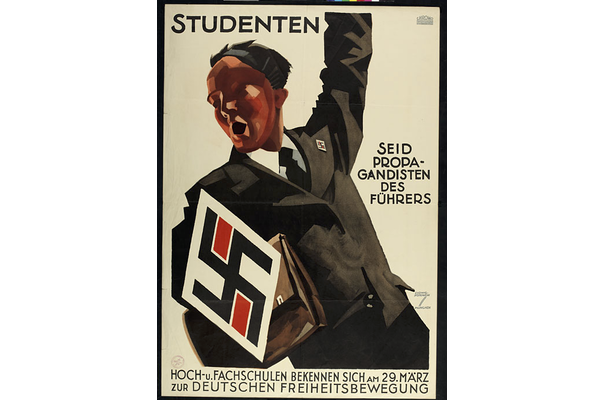 A recurring problem which plagued Nazi leadership and their attempts at total and complete control of the media in Germany were foreign broadcasts. Artists tackled this issue by presenting listeners to broadcasts from London, New York, Moscow and other ‘hostile’ locations as traitors. Utilizing guilt and the idea of racial and national disloyalty, the Nazis tapped into psychological manipulation to set their agenda and attempt to eliminate any threats to their control of the media landscape.

Nazi propagandists targeted virtually every segment of society in Germany. From the individual to the overarching state, from the inner family sanctum, to the international policies of aggression and Aryanism. Nazi propaganda attempted to normalize the dehumanization of entire groups of people deemed unworthy according to the strict racist policies implemented on a national level. The poster became a cheap transmitter of these various messages and combined visual arts with psychological methods to incessantly repeat Nazi ideologies to the German public.