Chris Wright has a Ph.D. in U.S. history from the University of Illinois at Chicago, and is the author of Notes of an Underground Humanist and Worker Cooperatives and Revolution: History and Possibilities in the United States. His website is www.wrightswriting.com. 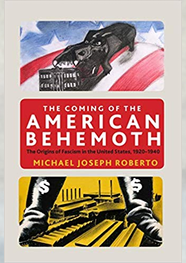 Fascism is usually thought of as a quintessentially and almost exclusively European phenomenon, that began with Mussolini, culminated with Hitler, and was eradicated in World War II. The U.S., in particular, is thought to have been largely immune to it, given the absence of mass movements similar to Nazism or Italian Fascism. But a different narrative exists, or at least did in the 1930s, before it was buried under an avalanche of patriotic American propaganda and liberal historiography. According to this alternative understanding, the U.S. was falling victim to fascism as early as the 1920s—though of a different sort than the European variety. Long-forgotten Marxist journals such as The Communist, The New Masses, and Labor Notes (unrelated to the current publication of the same name), and newspapers like the Daily Worker and the Industrial Worker, analyzed with great insight the nature of this distinctive American fascism, until the struggle against the Nazis shifted their priorities to supporting a more liberal and “patriotic” Popular Front.

In hisnew book entitled The Coming of the American Behemoth: The Origins of Fascism in the United States, 1920–1940, Michael Joseph Roberto has resurrected the old Marxian conception. Aside from its interest as a work of history, Roberto’sbook is particularly timely, as the old structures of American fascism have deepened in the last generation and colonized much of the world.

The essence of fascism

Roberto’s book reconstructs the arguments outlined in pioneering works of the 1930s and ’40s, such as Lewis Corey’s The Decline of American Capitalism, Mauritz Hallgren’s Seeds of Revolt, Robert Brady’s The Spirit and Structure of German Fascism and Business as a System of Power, Carmen Haider’s Do We Want Fascism?, and A. B. Magil and Henry Stevens’ The Peril of Fascism. These authors and others, whose insights were ignored by subsequent liberal scholarship, understood first,that fascism was not uniquely European and second, that it had already arrived in the United States. For example, Brady noted in 1938 that “business is going political as it never has before, and it has learned to funnel its funds and pressures through highly centralized, interest-conscious, informed and exceedingly well-manned, united front organizations.”

After World War II, liberal understanding of fascism focused on the German and Italian characteristics, notably their one-party nature, their reliance on readily identifiable paramilitary groups and their violent nationalist, racist, and anti-Semitic ideology. While it’s perfectly reasonable to consider such phenomena as one manifestation of fascism, the analysis tends toward superficiality insofar as it obscures the class roots and class functions of the regime. Roberto believes the Marxist approach, which looks beneath the surface, is more penetrating, resulting in a “dynamic definition of fascism as an inherent function of monopoly-capitalist production and relations whose telos was and remains the totalitarian rule of capitalist dictatorship.” Or as Carmen Haider said: American fascism was the “attempt to introduce a collective form of capitalism in the place of individualism.”

The Marxists were not alone in this view. As Brady notes, in the 1930s, “many persons strategically placed in American business confidentially argue that [fascism] is already here in both spirit and intent.” In a 1937 speech Harold Ickes, Franklin Roosevelt’s Secretary of the Interior, argued that “fascist-minded men” had “a common interest in seizing more power and greater riches for themselves, and ability and willingness to turn the concentrated wealth of America against the welfare of America. It is these men who, pretending that they would save us from dreadful communism, would superimpose upon America an equally dreadful fascism.” Roosevelt himself sounded the same note in a speech a year later when he said “I am greatly in favor of decentralization, and yet the tendency is, every time we have [a recession] in private industry, to concentrate it all the more in New York. Now that is, ultimately, fascism.”

Roberto tells the history of the American political economy in the 1920s and ’30s through this lens, exploring how the fascist structures of our own day were forged in the interwar years. Much of his book, in particular the long expositions of Marxian economics, will be familiar to readers versed in left-wing literature. He devotes a chapter to the ideologists of fascism, or business rule, in the conservative 1920s, notably Thomas Nixon Carver, Harvard professor of economics, and Charles Norman Fay, vice-president of the National Association of Manufacturers and author of Business in Politics. He also examines the role of Edward Bernays, father of public relations and believer in the necessity of “regimenting the public mind every bit as much as an army regiments the bodies of its soldiers.”

However, by 1930 the Great Depression had exposed the fallacy of those who believed in the concentration of power and wealth in the hands of the few. It turns out that when all the money goes to the top, the people on the bottom don’t have enough money to keep the economy growing. According to the leaders of business and politics, the answer to this problem was more fascism. Many of them pined for a Mussolini. Even liberal newspapers like the New York Times advocated “some sort of Council of State” that could rule by decree. In the end, the oligopolists only partially got their way, with the establishment of Roosevelt’s National Recovery Administration (NRA) in 1933.

At the time, Marxists and socialists argued that the New Deal was simply a higher stage of fascism, Roberto concurs. “Conceived as a means to create common ground between government and industry,” he writes, “the NRA marked a decisive move toward state monopoly capitalism in the United States.” The real power was left in the hands of big business, which wrote hundreds of “codes” to regulate prices, wages, work hours, etc., all to restore profits and eliminate overproduction. The NRA was a move towards a planned, state capitalist economy, of which big business was the sole beneficiary. Small businesses suffered, workers were not really empowered, income was not redistributed, and the economy remained sluggish. But the profits of big business recovered.

The early New Deal “bore strong resemblances,” Roberto notes, “to the corporatist state established in Italy in its approach to reconciling the antagonism between capital and labor. Both Mussolini and Roosevelt had made clear their commitment to maintain and strengthen capitalism in their respective nations. Roosevelt himself admired Mussolini: “I don’t mind telling you in confidence,” he wrote an American envoy in 1933, “that I am keeping in fairly close touch with the admirable Italian gentleman.”

Roberto is on shakier ground when discussing the “small-fry fascisti” who populated America’s political landscape during the Depression. His argument that Huey Long and the “radio priest” Father Coughlin were reactionaries and fascists is particularly weak. Long was a famously populist, albeit dictatorial, governor of Louisiana in the early 1930s who later became a U.S. senator, from which perch he criticized the New Deal for its conservatism and proposed his own wildly popular “Share Our Wealth” program. Had he not been assassinated in 1935, he might have posed a serious challenge to Roosevelt’s reelection. Coughlin, on the other hand, was never a political leader, though his radio broadcasts made him a political force. He, too, criticized the New Deal for its conservatism.

My own research on U.S. politics during the Depression hasled me to conclude that, despite what some historians (including Roberto) have argued, Long and Coughlin were more left-wing than right-wing, at least until Coughlin in later years turned decisively toward anti-Semitism. Certainly, they were politically ambiguous. But it’s inarguable that their massive following was due to the far-left character of their rhetoric—as may be judged by the Principles Coughlin laid out for the National Union of Social Justice, the political organization he founded. He went so far as to condemn the economic system itself:  “Capitalism is doomed and not worth trying to save.”

Roberto’s characterization of those who were attracted to Long and Coughlin is also wrong.

Amid the swirl of change, dislocation, and anxiety about the present and fears for the future, [the petty bourgeoisie] made up the great wave of political reaction during the mid-1930s… Not understanding how and why those above them were responsible for the crisis that threatened them, they blamed most of it on the enemies lurking below, the Negroes, Jews, Catholics, Mexicans, anarchists, socialists, and, of course, the communists—all enemies of True Americanism.

As I have argued elsewhere, there was no “great wave of political reaction” in the mid-1930s except among big business. The middle and lower classes were generally far to the left of Roosevelt—and pushed him to the left in 1935, with the so-called Second New Deal that partially repudiated the fascist tendencies of the first. Long and Coughlin themselves played an important part in this swing to the left, since Roosevelt’s popularity was waning in 1934 under the barrage of left-populist criticism. As a result, in 1935 he supported the Wagner Act, the Social Security Act (which was more conservative than most Americans wanted), and the establishment of the Works Progress Administration. In 1936 he ensured his overwhelming reelection by taking a page from Long’s book and denouncing “economic royalists” who were callous to the suffering of Americans.

The truth, then, is that Long and Coughlin, together with the influential Communist Party and other leftist organizations, helped save the New Deal from becoming genuinely fascist, from devolving into the dictatorial rule of big business. The pressures towards fascism remained, as reactionary sectors of business began to have significant victories against the Second New Deal starting in the late 1930s. But the genuine power that organized labor had achieved by then kept the U.S. from sliding into all-out fascism (in the Marxist sense) in the following decades.

The struggle to come

As we confront a polarized and oligarchical political economy so redolent of the factors that precipitated the Depression, The Coming of the American Behemoth offers lessons for the present. All the debate about whether Donald Trump is fascist, or whether society is in danger of succumbing to fascism, can be seen, from one perspective, as missing the point. Fascism in the materialist senseis already hereand would be here even if Hillary Clinton had won the presidency.

The danger isn’t so much that “paramilitary formations of brown shirts or black shirts” will take over America. It’s that Americans will fail to overturn the class foundations of fascism that are at this moment racing to destroy life on Earth. Roberto is right to emphasize this deeper structural reality.

The American Behemoth rose in the 1920s and ’30s. In the twenty-first century, “the beast is at full strength.” The Coming of the American Behemoth can serve not only as a useful problematization of the liberal understanding of fascism but also as an effective primer on the historical background for activists committed to fighting the beast that threatens to destroy us all.