‘What’s Up, Doc?’’ Bugs Bunny Takes on the New York Philharmonic, Carrots and All 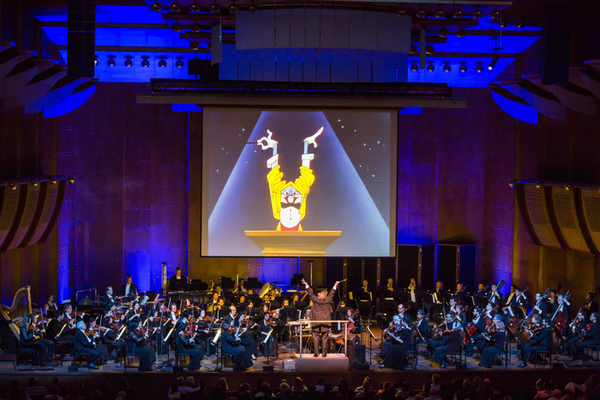 That wascally wabbit, Bugs Bunny, the notorious carrot chomping, sarcastic cartoon rabbit who first leaped on to the nations’ movie screens in 1940 and has been the star of 800 cartoons, four movies and 21 television specials, is back again, this time as the star of a special concert, Bugs Bunny at the Symphony II, in which the New York Philharmonic, live, plays the music of a dozen full length cartoons from the Looney Tunes and Merrie Melodies series, most starring Bugs, while the audience watches the cartoons themselves on a large movie screen. The production is at David Geffen Hall, the Philharmonic’s home, at Lincoln Center, New York. The show is this coming weekend as part of its national tour.

The concert/show, co-sponsored by Warner Bros., under different names, created by conductor George Daugherty and David Ka Lik Wong, has been traveling through the United States for about 20 years and has been seen by 2.5 million Bugs enthusiasts. In addition to the show, patrons at Lincoln Center will get to meet a number of furry and colorful Looney Tunes characters who will be roaming through the lobby before the curtain. If Wile E. Coyote is there, watch out for him!

Among the cartoons to be screened will be Baton Bunny, Show Biz Bugs, Rhapsody Rabbit, Tom and Jerry at the Hollywood Bowl, The Rabbit of Seville, Rabid Rider, Coyote Falls, Robin Hood Daffy and What’s Opera, Doc?.

Conductor Daugherty was a Bugs fan as a kid, but it was not because of the rabbit’s zany onscreen antics. No, it was because the Bugs Bunny cartoons, and most in the Looney Tunes and Merrie Meodies cartoon factories work used the music of the great classical composers, such as Wagner, Rossini, Liszt and Donizetti. “I was a classical music fan as a boy and I reveled in listening to this great music used as the backdrop for these cartoons. I also appreciated the fact that millions of American kids were being introduced to classical music through Bugs Bunny,” he said.

Fans at the Bugs concerts go wild. They cheer the good guys and jeer the bad guys. They applaud. They whoop. The juxtaposition of one of the world’s great orchestra’s playing the music of Richard Wagner as patrons of all ages shout and scream is both puzzling and wonderful.

“You go to a typical classic music concert and everybody is very quiet and respectful of the music. You go to a Bugs Bunny cartoon concert, though, and you lose all abandon. That’s what happens at these performances,” said conductor Daugherty with a big smile. “The same thing happened in the 1950s and it will happen forever.”

He adds that most older people saw Bugs and Looney Tunes cartoons in a movie theater and kids on a small screen television set. “The chance to see the cartoons in a movie’ like setting, the Philharmonic concert hall, repeats that old feeling for adults and is all new for kids,” he said.

In 1990, of course. Bugs was a huge Hollywood star. He began his career as a character in the Merrie Melodies cartoon series, making his star debut in Wild Hare in 1940. He was an instant hit, along with dopey Elmer Fudd, wily Daffy Duck and others. His popularity soared during World War II, when millions flocked to movies and the cartoons, which served as an escape from wartime pressures. Bugs Bunny was turned into a flag waving patriotic character during the war, even appearing in a dress blue U.S. Marine uniform in one cartoon. His popularity grew after the war and he remained the number one cartoon character in America for years, chomping on carrots in movie theater all across the country.

The really big advantages of the Philharmonic Hall, Daugherty said, was the sound of the orchestra in the concert hall.

“Back in the 1940s and ‘50s, when these cartoons first came out, the sound equipment in places where the cartoons were made, and in movie theaters, was limited. At the Philharmonic at Lincoln Center, and other halls where we stage the concerts, the sound is beautiful. That’s why people go to these shows,” said Daugherty.

He is always amazed at the people he meets at his productions. “I meet very old and very young people and music lovers, and cartoon overs, from every walk of life,” he said. He once met a couple who met at a Bugs Bunny concert eight years earlier, fell in love and were married.

People are getting used to these type of movie/performance shows. The Philharmonic has staged a number of them. Among them were Fantasia andStar Wars. The Philharmonic will stage a movie/concert of Close Encounters of the Third Kind and Psycho in September, Harry Potter and the Sorcerer’s Stone in December, and Singin’ in the Rain and Mary Poppins in May, 2020.The idea of a movie and a live orchestra is gaining ground in America – fast.

Surprisingly, the audience for the Bugs Bunny productions are neither kids or parents and kids – but individual adults. “I’d say 90% of our audience are adults without kids,” said Daugherty. “They are all coming back to see the cartoons they loved as children.”

And Bugs? The founder of the Warner Bros.’ Looney Tunes production show thinks that the hyperactive gray and white rabbit, getting on a little over the years, would love it.

When I ended my interview with the conductor, I was tempted to assume my very best Bugs Bunny voice and ask him “What’s up, Doc?” I could not do that, though, because the New York Philharmonic is so distinguished...

Really? Wait until this weekend, when Bugs fans pour into the Geffen concert hall at Lincoln Center and roar for Bugs and his cartoon pals who starred with him in all those wonderful old Looney Tunes and Merrie Melody cartoon production houses. The roar will be louder than the traffic in Times Square.

PRODUCTION: The Lincoln Center Shows are Friday at 8 p.m. and Saturday and 2 p.m. and 8 p.m.