Genocide Denial In Bosnia: A Danger to Europe and to the World 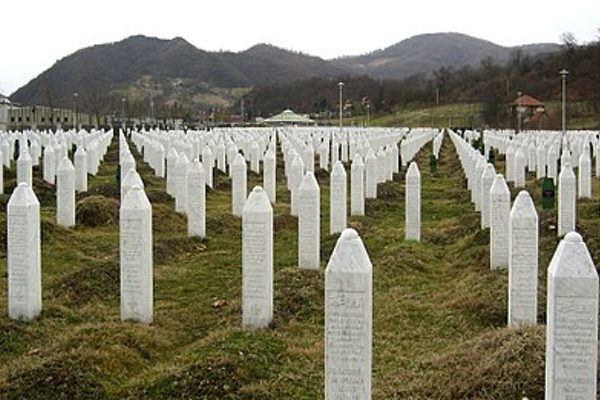 The Srebrenica Genocide Memorial in Potočari

On July 11, 1995, Ratko Mladic and his Serb (VRS) paramilitary units arrived to the sleepy eastern Bosnian city of Srebrenica. Designated a “safe zone,” by the United Nations, civilians from neighboring cities and municipalities clamored to the area in hopes of salvation and safety. That day, over 8,000 young Bosniak men and boys were brutally executed by Mladic’s troops in the biggest single massacre of the Bosnian genocide. It was an event unseen in Europe since the murderous Holocaust campaigns carried out by Hitler’s Nazi regime.  Today, this event, the details around it, and the nature of the killings has become political fuel for nationalist politics in Bosnia and Herzegovina.  Despite the annual exhumation of new mass graves, genocide denial has once again raised its ugly head, just as it did in the aftermath of World War II.

Despite thousands of testimonies, photographs, video evidence and overwhelming physical evidence in the form of mass graves, Bosnian Serb and Serbian politicians such as Milorad Dodik (currently a member of the Presidency of Bosnia and Herzegovina) continue to question and deny that a genocide took place in Srebrenica and the wider Bosnia and Herzegovina.  These are by no means passive remarks but rather a targeted campaign of denial. The latest iteration of this heinous and destabilizing action is Republica Srpska’s (one of the political entities created under the Dayton Agreement) so called “truth investigation,” into the Srebrenica genocide.  The implications could not be any more clear: a rise in nationalist fervor and fascistic political ideologies (the same one that fueled the last wars in the Balkans), historical revisionism, political instability, and perhaps most worrying a return to the denial of human rights, the truth, and reconciliation in the country and this precarious part of Europe.

Misinformation campaigns are nothing new.  Nazi authorities and their co-conspirators denied the killing of over 6,000,000 Jews during the war, and many who were sympathetic to their cause, continued to do so afterwards.  This did not simply stop at passively dismissing or denying the Holocaust, but ramped up through targeted campaigns of misinformation. Nazi propaganda dehumanized Jews and cultivated support for the mass murder of Jews before, during, and after the war. Their supporters, such as historian Harry Elmer Barnes, actively supported reports denying the existence of Nazi death camps and even published literature on the topic.  Neo-Nazi “think tanks,” (akin to RS’s investigative body) opened old wounds by downplaying the death count or actively denying the existence of a well-planned, full fledged campaign of extermination.

Dodik and authorities in the Republika Srpska seem to have taken a page out of this playbook. During the war, mass graves were routinely covered up and concealed, and the bodies of victims moved.  Today, this makes identifying the victims very difficult since there is significant mingling of remains.  For example, one victim’s remains were found at two separate locations, over 30km away from each other.  The disinformation and deceit did not stop with the halting of hostilities. Serb nationalist politicians and their supporters routinely downplay the genocide or dismiss it outright, refusing to accept blame or to begin a process of reconciliation. They are aggressively pursuing a policy of genocide denial and introducing unsubstantiated doubt in an effort to destabilize the country, and further, deny the humanity of the victims of the genocide. In 2004, the Appeals Chamber of the International Criminal Tribunal for the former Yugoslavia (ICTY), located in the Hague, ruled that the massacre in Srebrenica constituted genocide, which is a crime under international law.  This ruling was further upheld in 2007 by the International Court of Justice (ICJ) in 2007. These rulings matter little to nationalist leaders such as Dodik and those of his ilk.  Ultimately, they have very little respect for international bodies, considering them nothing more than attack dogs against the Bosnian Serb people. Their tools of the trade have been misinformation campaigns, propaganda, and political investigations.  What they fail to understand is that genocide denial has further societal implications. The distrust and feelings of enmity in Bosnia cannot subsist without the truth being taken seriously, and authorities formally apologizing and undertaking actions to prevent similar atrocities from ever happening again.

Ultimately, why is this so important?  The same de-humanizing philosophy which fed into ethnic and religious tropes leading to genocide is back, perhaps stronger than ever. The denial of history and the truth has become normalized in many parts of the world, sometimes through masked efforts at legitimacy.  In this moment it is especially important for scholars, journalists, and other professionals to stand up for the truth and demand a platform which overshadows lies and misinformation. Historical revisionism threatens not just the sense of justice for families in Bosnia, but the democratic process in the region.  If Europe is indeed serious about protecting democracy and individual rights, it needs to respond to attacks on the truth first.