Jane Landers is a Professor of History at Vanderbilt University. 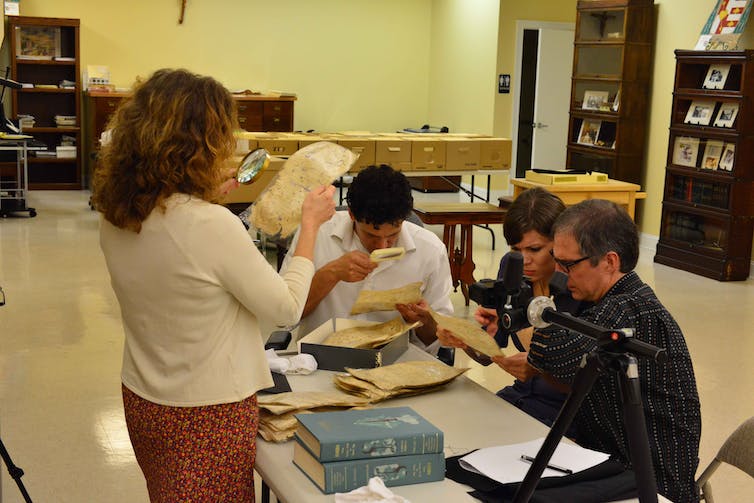 For most Americans, black history begins in 1619, when a Dutch ship brought some “20 and odd Negroes” as slaves to the English colony of Jamestown, in Virginia.

Many are not aware that black history in the United States goes back at least a century before this date.

In 1513, a free and literate African named Juan Garrido explored Florida with a Spanish conquistador, Juan Ponce de León. In the following decades, Africans, free and enslaved, were part of all the Spanish expeditions exploring the southern region of the United States. In 1565, Africans helped establish the first permanent European settlement in what is St. Augustine, Florida today.

The Slave Societies Digital Archive which I direct as a historian at Vanderbilt University includes Catholic Church records from St. Augustine.

These records date back to the 1590s and document some of the earliest black history of the U.S.

These Catholic Church records show that everyone was treated in theory as “brothers in Christ” and that the Church helped incorporate Africans into Spanish communities. It also helped free some slaves.

St. Augustine’s Catholic records show that after English Protestants established a settlement in what became South Carolina in 1670, their African slaves began to flee southward seeking admission into the “True Faith” – which to the Spaniards meant Catholicism.

Florida’s Spanish governors sheltered them and saw to their religious conversion, seeking royal approval of their actions. After some deliberation, in 1693, Spain’s monarch ruled that all slaves fleeing Protestant lands to seek conversion in Catholic colonies should be freed. Word of the fugitives’ reception in St. Augustine spread quickly through South Carolina, generating bitter complaints among planters and encouraging additional southward escapes by their slaves.

By 1738, the number of slave runaways reaching Florida had grown to approximately 100. Based on Spain’s religious sanctuary policy, Florida’s Spanish governor freed the runaways and established them in a town of their own called Gracia Real de Santa Teresa de Mose, two miles north of the Spanish city of St. Augustine. Mose was modeled after the nearby Indian towns where Catholic priests were also assigned to teach the “new Christians” the principles of the Catholic faith. 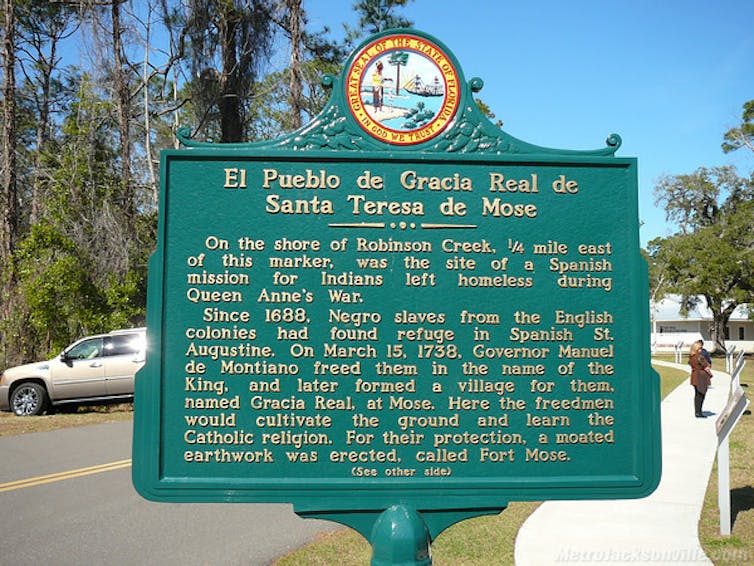 A museum presents the stories of Mose’s people. Jane Landers, CC BY

The site is now a National Historic Landmark, listed on the National Park Service Underground Railroad Route, and has been nominated for a UNESCO Slave Route designation. A museum based on both archaeological and historical studies presents the stories of the Mose townspeople.

The records in St. Augustine’s church reveal the multi-ethnic and multi-lingual nature of Mose.

Its leader and captain of the town’s militia, Francisco Menéndez, was of Mandinga ethnicity and came from the Senegambian region of West Africa in modern-day Senegal. He probably spoke a variety of languages but learned Spanish as well and wrote petitions to the Spanish King. Others at Mose came from the Congo nation, that is today in West Central Africa.

Pedro Graxales, the Congo man who was sergeant of the Mose militia was married to a slave woman of the Carabalí nation, from what is today southeastern Nigeria. The couple chose godparents from Congo for their children.

Florida’s priests noted that some people from Congo had undergone previous Catholic baptisms in Africa and that even as they learned Spanish, some of them still prayed and blessed themselves in their native language of Kikongo, a Bantu language spoken throughout large areas of West Central Africa.

Baptism into the Catholic faith was important because it cleansed black converts of the “stigma of original sin.” It also brought them into the “Christian brotherhood” of the church. Baptism also served an important social function. Families were linked in a system of reciprocal obligations between the baptized and his or her godparents, as also between the parents and godparents.

For example, Francisco Felipe Edimboro and his wife, Filis, were African-born slaves of Florida’s wealthiest planter, Don Francisco Sánchez. The couple had their three-year-old son baptized on the same day that their master and his mulatto consort baptized their natural son. Edimboro and Filis eventually had 10 more children baptized in St. Augustine’s church. On July 15, 1794, they were themselves baptized and married.

Their Catholic baptism and marriage coincided with their suit to buy their freedom and likely contributed to the successful outcome of that litigation.

As a free man, Felipe Edimboro became a landowner and sergeant of St. Augustine’s free black militia. He also served as godfather to 21 black children born in St. Augustine whose baptisms were recorded in its Catholic Church.

What these records say about families

These and other records allow scholars to track the history of several generations of the large Edimboro family to the present day.

One of Edimboro and Filis’s free daughters, Eusebia, had a child with an enslaved man named Antonio Proctor, described in the records as “the best translator of the Indian languages in the province.”

Edimboro and Proctor served on the Spanish frontier together and Proctor’s valuable military service earned him his freedom. 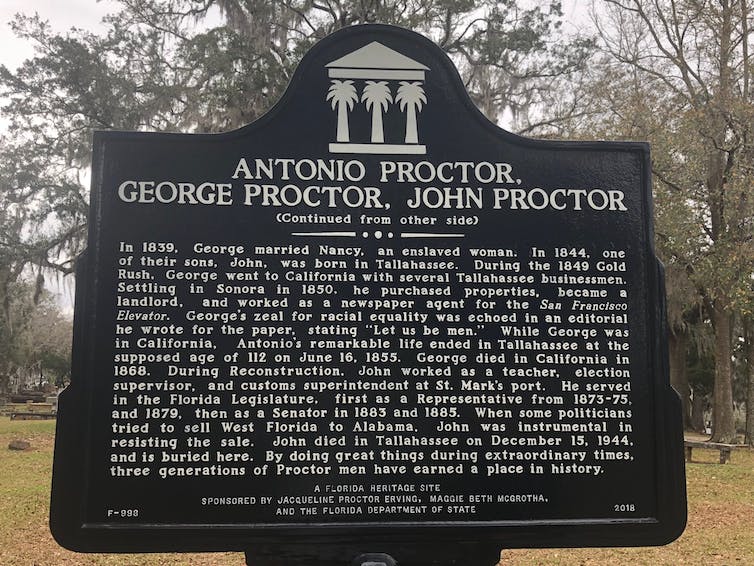 Eusebia and Antonio’s freeborn son, George Proctor, became a master carpenter and builder in territorial Florida and George’s son, John Proctor, served in the Florida House of Representatives in the 1870s and in the Florida Senate from 1883 to 1886.

More than 100 descendants recently commemorated their family’s rich heritage in a public ceremony in Tallahassee, Florida where they mounted a memorial plaque in the Old City Cemetery.

These records show that black history in United States begins much earlier than previously thought. They also show that men, women, and children once thought forgotten left rich histories in these little explored sources.