One Of The Greatest Cover-Ups Of The 20th Century

John Heminway is an author and award-winning filmmaker who has produced and written more than two hundred documentaries on subjects as varied as travel, brain science, evolution, and natural history. He has won two Emmys, two Peabody Awards, and a duPont-Columbia Award. Most recently, he is known for his exposés of the illicit ivory trade. In Full Flight is his sixth book. Heminway lives in Montana. 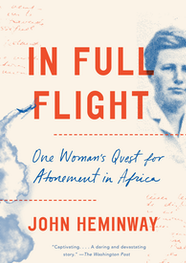 How frequently do we learn that our good friend-- the one we think we know so well-- we never knew at all? No surprise that almost all humans harbor secrets, but what if those secrets, once disclosed, are darker than midnight?

In Full Flight is a story of two lives in one body. They belonged to Dr. Anne Spoerry, a good friend of mine who kept her two selves separated by a vertiginous wall of silence. At one level, In Full Flight pays tribute to Africa for its gift of secrecy—faithfully providing cover for those on the run. At another, it illuminates the burden a person of substance must shoulder even in the far reaches of a wild land. The last fifty years of Anne’ life, all in Kenya, were distinguished by her drive to help the rural poor-- a source of considerable pride to her, her adopted country and an ever-widening circle of admirers from around the world. It also illuminates the personal cost of such secrecy.

What about her European past? I was told never to ask. So I became one of the intemperate ones who did repeatedly, only to suffer the consequences—thunderclaps of temper that reduced me to quivering jello.

I knew Anne exclusively in Africa during the last 20 years of her life at a time when many Kenyans had taken to calling her “saintly” for her work as a medec in volant, flying doctor. Since I was only able to judge her through my Africa lens I too focused on her self-sacrifice and bravery.

Anne and I had met because a magazine assignment. Later my profile of her grew into a chapter in one of my books. In time, our professional association mutated into a wonderful friendship—not unusual for Africa. During the many dinners Anne and I shared in Nairobi there was no disguising my admiration. Her tales of derring-do were mesmerizing. Eight years before her death, I filmed her for a PBS film. In whatever medium I chose, I reported only on triumphs—those perilous cross-country flights to East Africa’s distant reaches-- all to better the health of forgotten peoples. Over her lifetime, I wrote that the number of patients Dr. Spoerry treated and saved was simply incalculable.

When Anne died in 1999, age 80, her admirers were so numerous her family organized four memorial services to accommodate every sector of the population.  At each, the air virtually trembled with tributes. So moved was I by this outpouring of admiration for Anne I determined to write a biography, focusing on her singular approach to health care.

A year after Anne’s death, while honeymooning with my wife on the island of Lamu, I came upon Anne’s nephew, Bernard Spoerry, and told him of my plans. “But why,” I asked off handedly, “Was she so secretive about the war?” Bernard seemed startled. All he knew was that she had bravely served in the Résistance, had been captured by the Germans and interned in a concentration camp. As for details, he had no ready answer—only that his aunt’s time in Ravensbrück had always been a well-guarded family secret. Bernard’s father, Anne’s beloved brother, knew all, but, alas, he had taken those secrets to his grave. Perhaps, Bernard suggested, the contents of Anne’s farmhouse safe would shed light on my question. A week later I opened the file, hidden away in that up-country safe for at least 50 years. On it Anne had written: “Do not open.”

I opened it. Topmost were three attached pages, dated 1947 and headed: “CROWCASS: Central Registry of War Criminals And Security Suspects.” I read down the list by nationality. Under the heading “Switzerland,” there was one entry: “Anne Marie Spoerry… Crimes against humanity including torture.”

After I overcame the shock, the focus of my research swiveled from the broad savannahs of Africa to the musty recesses of European libraries. I began in Basle and Zurich, and then I turned to Kew’s wartime archives. In time I visited Ravensbrück and afterwards enjoyed a correspondence with its head librarian. Finally, after nine years imploring lecommandant des archives to allow me to read the Anne Spoerry files, I received a response with a begrudging “yes.” I was directed to a military installation outside the medieval town of Le Blanc in central France. There I was allowed three hours, under the laser glare of an armed guard, to pour over a beribboned collection of letters, affidavits and testimony. These, I found, contained essential intelligence that would allow me to complete my book.

While I was confident detailing Anne’s Africa story, my knowledge of World War II was, at best, a series of generalities, most related to my father’s landing at Omaha Beach in the US VII Corps. I now needed to catch up, fully aware there were over 16,000 books dedicated to the subject of the Holocaust and concentration camps— most written by scholars and eyewitnesses. Being neither, I embarked on a learning blitz. Devouring these books was just the beginning. Critical were Anne’s own files. So too was spending a day in Ravensbrück and pacing out Block 10 (exclusive to tuberculosis victims and “idiots”) where Anne exerted power in the final months of 1944. My hours spent in Ravensbrück chill me even now. My final step was to interview three women who had known Anne in Ravensbrück—Violette LeCoq, Odette Allaire Walling and Dr. Louise LePorz. These remarkable survivors made me understand the true enormity of Nazi evil and Anne’s complicity in it. So taken was I by Dr. LePorz’s 20/20 recall and her dogged commitment to the truth that I interviewed her four times.

From these many sources I learned that, beginning in September and ending on New Year’s Day 1945, Anne fell under the spell of fellow prisoner, double agent, provocateur and seductress, Carmen Mory. Mory was Block 10’s “block elder,” a prisoner the Germans designated “privileged” in return for her help informing against her fellow prisoners. Having helped her recover from pleurisy in August 1944, medical student Anne became her willing amanuensis. Intoxicated by the older woman’s wiles, Anne crossed the line from dutiful prisoner to exterminator. Together, Anne helped conduct a reign of terror, brutalizing the insane, making selections for the gas chamber, and, in a number of cases, administering lethal injections— all to curry favor with SS guards and... Carmen Mory. In a statement, buried in court testimony from the Hamburg War Crimes Trials in 1947, Anne claimed she had been “bewitched.”

What makes a 26-year-old member of “a good family” turn from tender humanity to brutal malice? Doesn’t this lie at the heart of life’s great riddles? The question may shadow our lives today, with its association to cover-ups and shameless falsehoods.  After the war, Anne was tried in three separate jurisdictions. Bolstered by family wealth, she escaped punishment. In the only tribunal where she was not represented by counsel she confessed that she had been spellbound by Carmen Mory. To make amends she vowed to spend the rest of her life “caring for lepers.”  Her jurors forbade her ever to practice medicine in France or its dependencies.

Through family connections, Anne fled first to Aden and then to Kenya where, for two years, she practiced medicine without a medical diploma. Later, when she learned to fly, her medical influence expanded exponentially. The further she flew, the more famous she became—the world’s “first woman flying doctor,” celebrated by patients as “the angel from heaven.” Fame was an inspired strategy. With its trappings came the additional privilege of an apology-free way with words. Few dared risk the famous doctor’s ire with reckless questions about her past.

Thanks to Africa, Anne was given a second chance, and then a third. Even now, her cover-up and renascence borders on the miraculous.

While few of us harbor secrets as dark as Anne Spoerry’s, many of us cannot fail to admire her decades of private atonement, serving as her own judge, jury and executioner, even though her crimes were unspeakable.

In Full Flight raises questions that, for me, will linger forever. The first of many is “what would I have done?”