Benjamin Hopkins is the Director of the Sigur Center for Asian Studies and an Associate Professor of History and International Affairs at the George Washington University. Dr. Hopkins is a specialist in modern South Asian history, in particular that of Afghanistan, as well as British imperialism. His first book, The Making of Modern Afghanistan, examined the efforts of the British East India Company to construct an Afghan state in the early part of the nineteenth century and provides a corrective to the history of the so-called ‘Great Game.’ His second book, Fragments of the Afghan Frontier, co-authored with anthropologist Magnus Marsden, pairs a complex historical narrative with rich ethnographic detail to conceptualize the Afghan frontier as a collection of discrete fragments which create continually evolving collage of meaning. He has additionally co-edited Beyond Swat: History, Society and Economy along the Afghanistan-Pakistan Frontier with Magnus Marsden. 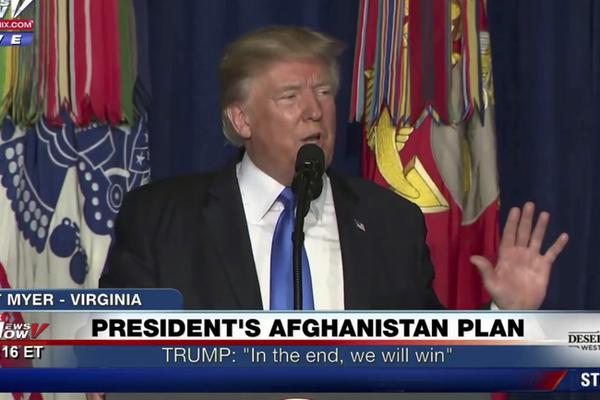 Once again, the President put his factually-challenged relationship with the past on public display. In a January 3rd Cabinet meeting, Trump offered a tour de force with a fanciful alternative history of Afghanistan. According to him, the Soviets invaded in late 1979 because of cross-border terror attacks. The subsequent decade-long war, the President insisted, bankrupted the USSR and led to the collapse of the Soviet Union. Trump clearly had no idea what he was talking about. If the past is a foreign country, then in Trump’s parlance, he is an illegal immigrant trespassing upon it.

To briefly correct the President’s (mis)understanding of Afghan history: The Soviet Union invaded the country on December 26, 1979, ostensibly to support a friendly communist government under threat from a domestic insurgency provoked by unpopular reforms and the violent suppression of political dissent. Fearing the collapse of an allied regime on its southern border, the Soviets replaced the Afghan communist leadership with a more moderate and pliable cadre. Though initially planning for a swift withdrawal, Soviet forces soon found themselves sucked into a quagmire which proved impossible to escape. Over the next decade, they deployed roughly 100,000 troops, losing 15,000 of them, in a bloody counter-insurgency against the so-called mujahideen– American supported ‘freedom fighters’. The war forced over 7 million to flee as refugees, created an unknown number of internally displaced persons, and killed, maimed and wounded an untold number of Afghans. The Soviet war ended with the Geneva Accords in 1988, allowing the USSR to feign ‘peace with honor’ which covered an ignominious retreat.

The United States and its allies immediately denounced the Soviet invasion, which made Afghanistan a battleground in the increasingly hot Cold War. American policy-makers saw the potential of turning Afghanistan into the Soviet Vietnam. Beginning with the Carter administration, and significantly ramped up under Reagan, the US secretly funneled $3 billion to the Afghan mujahideen. By bleeding the soft underbelly of the beast, American Cold Warriors hoped to strike a mortal wound to the evil empire. Following the end of the Cold War, some conservative commentators characterized the Soviet defeat as a consequence of Reagan’s tough stance which forced them to spend an incessant, and unsustainable amount on defense. These analysts contend that the Afghan war, along with the cost of Soviet military aid to Central America and the US deployment of Pershing missiles in Europe, bankrupted the Soviet Union and led to its collapse.

It was this interpretation of history which Trump’s stream of consciousness soliloquy rather clumsily tipped his hat to. Nevertheless, the President’s alternative history almost immediately earned him a scathing rebuke from a no-less august stalwart of the right than the editorial page of the Wall Street Journal. The Journal’s willingness to take him to task for a position loosely held by many on the American right over the years is notable. Doubly so for a publication which has repeatedly proven reticent to fact-check the man.

Yet the Journal’s response is a non-sequitur. What has been lost in the consternation provoked by the President’s remarks is the fundamental question which remains unanswered – namely, what the hell is the US doing in Afghanistan? Though he got his facts wrong – Trump does not seem to care about them anyway, and is thus the bullshitter-in-chief in the Harry Frankfurt sense – the essence of his question is correct. The US has lacked a clear policy on and purpose in Afghanistan since the early 2000s, making the President’s rambling, historically uninformed remarks something of a bullshit-savant moment.

Now entering its eighteenth year and one of the costliest wars in American history, the President has reportedly grown frustrated with a continuing conflict which he seemingly does not understand. While his ignorance provides fodder for detractors and evokes the concern of the national security establishment, it also allows him to ask basic questions regarding the purpose of that war which have long been considered settled within Washington circles of power. The President’s ignorance of Afghanistan, though extreme, is far from unique amongst the American policy establishment. Such ignorance is the consequence of a larger failing of American policy in the country – the lack of a clear publicly pronounced purpose and end-goal for the continued American presence in Afghanistan.

Despite nearly two decades of war in the country, American policy is largely driven by a noxious combination of inertia and sunk costs. A large part of the problem is that America’s civilian political leadership long ago abdicated its war-fighting responsibilities regarding Afghanistan. It is the role of civilian elected officials to formulate, articulate and communicate the fundamental purpose of an armed conflict and to direct the military and security apparatus of the government to execute that vision. But this has not been the case with Afghanistan. Since the quick victory over the Taliban in 2001, America’s political attentions quickly wandered elsewhere, most importantly Iraq. This meant that the Afghan war has largely been farmed out to the generals to fight a war whose aims and purpose they have not been instructed in. The military has thus continued to do what the military knows best – fight a war. It is no wonder then this conflict goes on, with no end in sight.

What the hell is the US doing in Afghanistan? The President clearly does not know. But this is the central question. The one the President himself, along with the other elected officials of the US Government, needs to answer. It is neither the responsibility nor the place of the US military leadership to do so. In his bullshit-savant moment, Trump has set himself a challenge. Sadly, it is one he has demonstrated little interest in or ability to rise to.