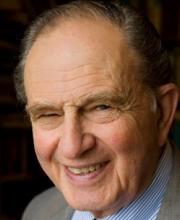 Bernard Bailyn is the Adams University Professor and James Duncan Phillips Professor of Early American History Emeritus at Harvard, where he has taught since 1949. He is the author of The Ideological Origins of the American Revolution (1967), for which he received the Pulitzer and Bancroft prizes in 1968; The Ordeal of Thomas Hutchinson(1974), winner of the National Book Award in History in 1975; Voyagers to the West (1986), which won the Pulitzer Prize in History. Bailyn has been described in the Washington Post Book World as “arguably the pre-eminent historian of the thirteen colonies’ break with Britain.” Robert V. Remini has labeled Bailyn “the foremost historian of the American Revolution,” while Stephen Presser, of the Chicago Tribune Books, identified him as the “dean of American colonial historians.” Another Washington Post Book World critic remarked that “any book by Bailyn… is an event.”

Bailyn earned his A.B. from Williams College in 1945 and his Ph.D. from Harvard in 1953. Bailyn is a member of numerous organizations in the United States and abroad including the American Historical Association (president, 1981) and the American Academy of Arts and Sciences. He is the recipient of many awards, including more than 15 honorary degrees. In February 1998, Bailyn inaugurated the Millennium Evening Lecture Series at the White House, and in March of that year, he was awarded the Jefferson Medal of the National Endowment for the Humanities. He sees the influence of the American Revolution extending beyond the political realm of its time, into the present. “Whether we recognize it or not, the sense we make of the history of our national origins helps to define for us…the values, purposes,and acceptable characteristics of our public insititutions.”

I was lucky, being at Harvard, to have some great historians as instructors, but when I think back to what direct guidance they gave me I don’t come up with much. Samuel Eliot Morison advised young historians to go sailing in the summers, which was advice wasted on me since the only vessel I had been on was a troop ship and I was seasick most of the time. Paul Buck, whose fine book The Road to Reunion impressed us all, advised us that when we come to lecture we should tell a joke at about 40 minutes into the hour. That didn’t help much, a) because I didn’t know that many jokes, and b) because his own jokes were so bad. And Oscar Handlin, when I came to him with a complex theoretical problem about Max Weber, Ernst Troeltsch, and R.H.Tawney, when I was writing about Puritanism and economic growth, muttered something like “umm.”

But the truth is that I learned an enormous amount from all three of them – not from what they said but from what they did, as teachers and writers. From Morison, especially from his vast 15-volume history of the US Navy in WW II, and also from his multi-volume history of Harvard, I learned that it is possible to write a complex story crowded with detailed incidents and conflicting personalities in clear, simple narrative form. From Buck I learned that one can best motivate students by getting them to elicit what truly interested them, to get them to recognize what – for whatever reason – caught their imagination, and encourage them to work out from there. And from Handlin I learned the most important thing of all, that history is a form of intellection, a way of thinking and understanding, not a compilation of facts, no matter how cleverly you organize them.

So I was lucky, not in having wonderful advice given to me but in witnessing up close some master historians at work. It’s what they did that mattered, not what they said.

Additional Info: During World War II Bailyn served in the Army Signal Corps and in the Army Security Agency.
Professor Bailyn is a member of the American Historical Association and served as President in 1981. He is also a member of the American Academy of Arts and Sciences, the American Philosophical Society, and the National Academy of Education. He is a Corresponding Fellow of the British Academy and the Royal Historical Society, and a Foreign Member of the Russian Academy of Sciences, the Academia Europaea, and the Mexican Academy of History and Geography. He was a Trustee of the Institute of Advanced Study, Princeton, 1989-94.
Bailyn was the Jefferson Lecturer, National Endowment for the Humanities, 1998, and the first millennium lecturer, White House, 1998.
He also serves as a Senior Fellow in the Society of Fellows.
Bailyn is Director of the Harvard’s International Seminar on the History of the Atlantic World since 1995.