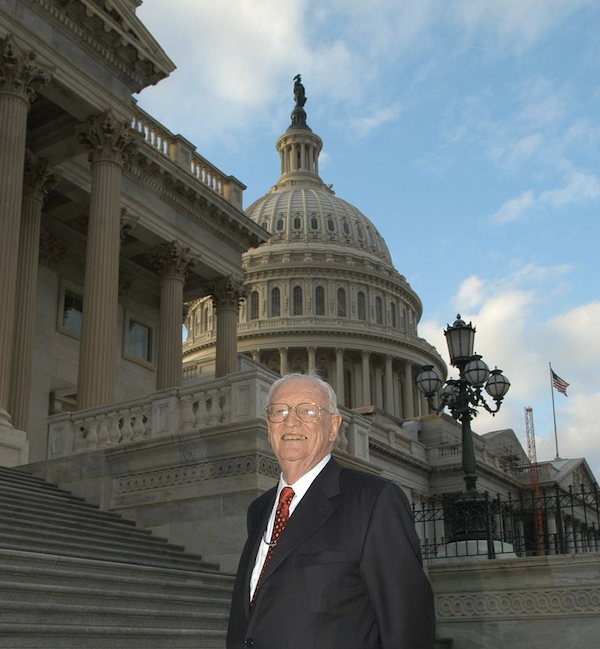 What They’re Famous For

Robert V. Remini is professor emeritus of history and the humanities at the University of Illinois at Chicago. He is currently at work on a narrative history of the U.S. House of Representatives, and has been named House Historian. Remini has written a three-volume biography of Andrew Jackson, the third volume of the series, Andrew Jackson and the Course of American Democracy, 1833-1845won the National Book Award for nonfiction in 1984. He is also the author of biographies of Henry Clay and Daniel Webster, as well as a dozen other books on Jacksonian America, and is considered the most preeminent scholar on Andrew Jackson and his times.

To a very large extent my career as an historian, such as it is, was determined by events over which I had little control. For example, when I graduated from college I fully intended to become a lawyer. Not because I was intrigued by the law but because it seemed like a worthy profession then for a child of the Great Depression. Fortunately World War II came along and I found myself aboard a ship plying the Atlantic and reading histories of the United States. I even read all nine volumes of Henry Adams’s History of the United States During the Administrations of Thomas Jefferson and James Madison and I loved every page. After three years in the service I realized I wanted to spend the rest of my life reading and writing and teaching history. I got so worked up that I even had the audacity of writing an article and submitting it for publication to the American Historical Association. It wasn’t a very good article and was based solely on secondary sources. Graciously, the AHA rejected it, but it was not many years later when they did publish an article I wrote.

So as soon as I was discharged I enrolled in the graduate school of Columbia University and began my newly discovered career. I was particularly anxious to study 20th century, urban, New York, political history. I’m not sure why, except that I was born and raised a New Yorker, as were both my parents. I signed up for an MA seminar conducted by Richard Hofstadter. He had arrived at Columbia about the same time I did. The class was packed with about 40 students, most of them returning veterans. Can you imagine a seminar of 40? I don’t think I ever said a word in the seminar. I just enjoyed every word Hofstadter spoke, for he spoke like he wrote, in complete sentences and paragraphs, every one a delight to hear. I wrote my master’s essay on John Purroy Mitchel, the reform mayor of New York City just prior to World War I and fully intended to continue with this topic for my doctorate.

Then one day Hofstadter approached me and suggested that I consider doing my PhD dissertation on Martin Van Buren since the Mitchel papers were locked up for 50 years which would prevent any further work on that topic. It seems that Columbia had received a grant that would permit the University to purchase microfilm copies of presidential papers held in the Library of Congress and the library people at Columbia were anxious to begin with copies of the Van Buren papers. Apparently the grant also stipulated that a graduate student begin working on them after their arrival. Now Van Buren was a New Yorker, said Hofstadter, and an important political figure. Granted he was not urban or twentieth century, but if I accepted his suggestion it would mean that I could do my basic research at Columbia and not have to travel to Washington or any other remote repository. Now if you think a graduate student cannot be influenced by such a proposal you are very mistaken.

I was gratified that Hofstadter had suggested me for this work and I agreed to switch to the nineteenth century. I did my doctoral dissertation on the early political career of Martin Van Buren under the direction of Dumas Malone, since Hofstadter did not give a PhD seminar at that time. That dissertation when published as a book argued that Van Buren was central to the formation of the Democratic party and the revival of the two party system. I fully expected to continue that work and write a full biography of Van Buren but Andrew Jackson intervened and changed all my plans. But that’s another and longer story.

Additional Info: In May 2005 named House historian.
In September 2002 named Distinguished Visiting Scholar of American History in the John W. Kluge Center at the Library of Congress; Remini will research and write a narrative history of the U.S. House of Representatives. (The project was authorized by Congress in 1999 under the House Awareness and Preservation Act (P.L. 106-99))
Remini is a much sought after speaker and is hailed for his ability to make history “come alive.”
Honorary historian of Thirteen-Fifty Foundation.
Remini was named to the Honorable Order of Kentucky Colonels.
Remini has served as a review board member for the National Endowment for the Humanities since 1974.
He was selected by President George Bush in 1991 to speak at the White House as part of the Presidential Lecture Series on the Presidency and has been invited by President George W. Bush as well.
Special editor, Crowell-Collier Educational Corp.
Military service: U.S. Navy, 1943-46; became lieutenant.