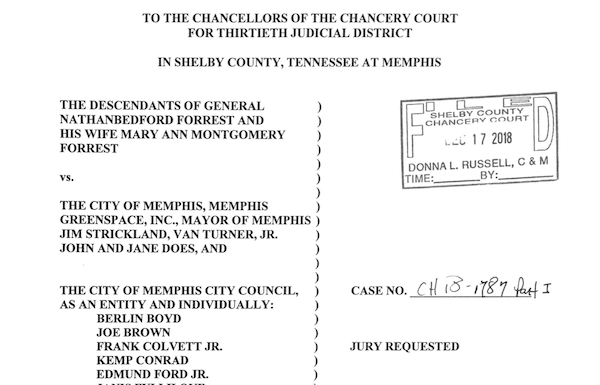 Related Link What critics have said about Nathan B. Forrest

H. Edward Phillips and attorneys representing descendants of Confederate General Nathan B. Forrest filed suit today in a Memphis Court seeking the return of the CharlesNiehausstatue removed December 2017 from Health Sciences Park in the city. They are also wanting all historical signs, including the one removed commemorating U.S. Army Air Corps General N.B. Forrest III killed in World War II, the monument base, copper caskets, earthly remains under it, and the expenses to move the monument to a location of their choosing.

It’s believed to be the first time living descendants of a national historical figure have filed such a suit to protect their ancestor’s grave site and remains.

Two of the actions were reportedly in violation of Tennessee statutes 39-17-311 and 46-1-313 making it a Class E felony to deface or disturb grave sites. District Attorney General for Shelby County Amy Weirich’s office has, to date, not brought charges against any of those reportedly responsible for the actions.

According to the suit filed in 30th District Chancery Court, Memphis Mayor Jim Strickland and the city council illegally sold and transferred Health Sciences and Memphis Park on December 15, 2017 - five days before changing the city’s charter that permitted them to legally do so. Health Science and Memphis Park were sold to Memphis GreenSpace, Inc. – statues and all - for the sum of $2,000. The properties were valued at around $1 million each.

Memphis Greenspace President Van Turner, who is also a Shelby County Commissioner, brought in a crane that night and immediately removed the Niehaus statue from atop the gravesite of Nathan B. Forrest and wife Mary Ann Montgomery Forrest. The monument is regarded as one of the three best equestrian statues in the United States and valued at more than $6 million. It was, according to a limited review of the Tennessee Comptroller’s office, placed in an undisclosed location.

The Forrest descendants also want Memphis to pay for any damages caused to the statue upon its removal. Earlier this year the family offered to settle with the city for $30.6 million to take possession and move the monument, but the offer was rebuffed by the city.

"Memphis city officials set a very dangerous precedent with this action, as it's historical diversity has always been one of its greatest strengths,” attorney Edward Phillips said.” The City's  arguments  can be used by others to apply to Crazy Horse and other monumental works - even the WC Handy statue - depending on the party in power or the political current at any given time."

Last May Davidson County Chancellor Lyle ruled the Memphis Parks’ sale was legal, but granted a stay in July to leave the monuments, and Forrest graves untouched pending the outcome of an appeal.