Spartacus indeed freed slaves, but there's more to his complicated story than that says historian

Historians in the News
tags: Spartacus 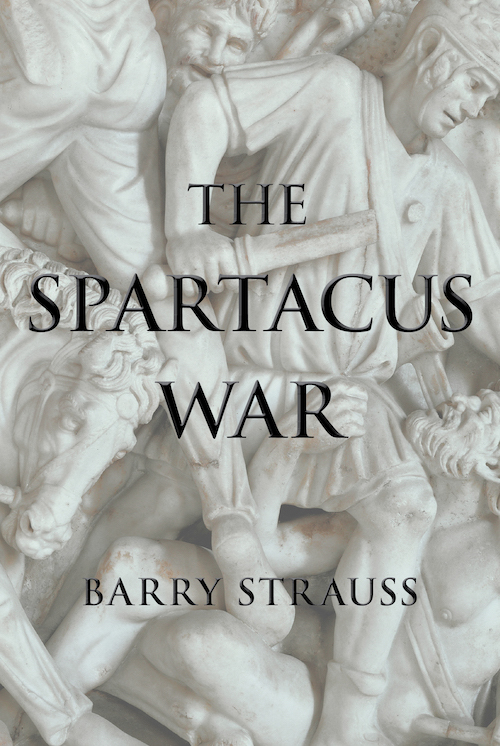 An Interview with Barry Strauss, professor of history and classics at Cornell University, and a leading expert on ancient military history. He has written or edited several books, including The Battle of Salamis, The Trojan War, The Spartacus War, Masters of Command, and The Death of Caesar. He is also the author of The Spartacus War (Simon and Schuster).

Q. Why do you think Spartacus has been such an inspiration to world leaders throughout history? What makes his story so compelling?

Spartacus freed slaves – many slaves, around 60,000 men and an unknown number of women and children. His motives were complicated; liberation was probably not his primary goal, but there is no way around the fact: he freed slaves. And he defied the odds. Spartacus started with nothing more than kitchen knives and stood up against the greatest empire in the world. He displayed considerable nobility. For instance, Spartacus shared the profits of war equally with his men instead of taking the lion’s share for himself. He tried to stop his men from going on a rampage and mistreating civilians. He was an excellent general. He was constantly moving, constantly thinking, constantly reacting to the Romans’ every move. Even when Rome’s overwhelming power bore down on him, even when the odds of survival vanished, he never gave up; he went down fighting. Although Spartacus failed, his memory lived on in Rome, as a scare figure to the rulers and perhaps as a hero to the slaves. In modern times, Spartacus has been an inspiration to oppressed people, and rightly so.

Q. As an historian, particularly when working on a subject as prolific as Spartacus, how do you find a new angle or story to tell? What motivates you to write about such well-known pieces of history?

New times raise new questions about the past. I wanted to write a book that made us think differently about a man whose image was still preserved in the amber of outdated twentieth-century concerns. Our Spartacus was shaped by the ideas of communists and their opponents, men like the blacklisted Hollywood writer Dalton Trumbo, who wrote the screenplay for the movie Spartacus and Howard Fast, who wrote the book on which the movie was based. Both Trumbo and Fast were communists who did jail time in the McCarthy era. Spartacus was shaped too by the ideas of anti-Communists like U.S. President Ronald Reagan, who invoked Spartacus as a hero of freedom, and Arthur Koestler, a disillusioned ex-Communist who wrote a novel in which Spartacus is a revolutionary who is corrupted by power, like Lenin or Stalin.

We need a new Spartacus to speak to today’s concerns: from insurgency to ethnic conflict, from root causes to terrorism, from immigration to multi-cultural societies, and from religious militancy to revived empire.

During the Cold War, for example, we looked at Spartacus as an early socialist revolutionary – a Marxist before Marxism. Now we wonder whether Spartacus wasn’t the first insurgent. Marxism spurns religion as “the opium of the people” but Spartacus wrapped himself in the mantle of divine support. Socialism rejects nationalism as well but Spartacus was a nationalist who ran into trouble because he had to share power with other nationalists; in fact, the rebel army suffered from ethnic conflict.

I also wanted to take another look at Roman strategy and policy against Spartacus. The experience of America, Britain, and their allies in Iraq and Afghanistan has underlined the difficulty of putting down an insurgency. The Romans too struggled before they came up with an effective strategy of defeating the rebels. I became interested in counterinsurgency, ancient style.

Finally, one issue that remains at the heart of the story is slavery. Nothing can change the horror that was ancient slavery. But by decoupling Spartacus from a story about Marxism – pro or con – we can take a cold, hard look at the nature and limits of Spartacus’s slave revolt. For instance, Spartacus never tried to raise a rebellion of all of Italy’s slaves. He focused on rural slaves; urban slaves played little part.

Finally, I turned to Spartacus because of the challenge. It is a very difficult story to research. History is written by the victors, and that means that we know about Spartacus only from the Romans’ point of view. Few stories prove more difficult to tell than those of runaway slaves. I wanted to try to give them voices.

Q. What are the most common misconceptions about Spartacus’s life and legend that you’ve attempted to correct with this book?

Many people think that Spartacus fought to abolish slavery and establish brotherhood. They think that he was motivated by secular, philosophical ideals. They think that he himself was born a slave and managed to build a great army even though he had never served as a soldier before. These are all misconceptions.

Spartacus did free slaves but probably only as a means to an end. He did not want to stay in Italy and liberate the million or more people in chains. Rather, Spartacus wanted to build an army that could break out of Italy and go back with him to his homeland in Thrace (modern Bulgaria). What he would do there is unclear, but it is a good guess that he wanted to establish a political base and continue to fight Rome. Thrace had fought against Roman rule for generations and a war was being waged there at the time of Spartacus’s revolt.

Ironically, in earlier days, Spartacus had fought forRome. He was not born a slave but a free man. He had plenty of military experience before beginning his revolt. In fact, he had served as an allied soldier in the Roman army.  But Rome had abused Spartacus and sentenced him to a humiliating fate as a gladiator. We do not know why this happened but a contemporary Roman writer said that it was unjust and that Spartacus had done nothing to deserve this fate. No wonder he went from fighting forRome to fighting againstRome.

Religion played a major part in Spartacus’s revolt. His female companion or wife (which is unclear) was a priestess of Dionysus, god of liberation and the national god of Thrace. She went into trances and uttered prophecies of Spartacus’s greatness. She said that Dionysus had given a miraculous sign of his support for Spartacus. Since Dionysus was very popular among the downtrodden people of Italy, religion probably helped Spartacus win followers.

Q. What made Spartacus’s army so difficult to defeat? Do you think it was the will to break free of the chains of their servitude or was Spartacus that great a leader?

Spartacus’s army had excellent morale but leadership was the key to its success. Spartacus was uniquely qualified to win victories. He was a veteran soldier who knew his enemy, having fought in an allied unit in the Roman army. He knew the tactics both of unconventional warfare, which characterized the fighting style of his native Thrace, and conventional warfare, which he had practiced in the Roman army. He was a great communicator who combined the celebrity of a gladiator with the charisma of a prophet.

Q. You write that one of the main problems for Spartacus was that ethnic conflict and identity politics swamped the insurgency and made it nearly impossible to lead. Do you think that because of this the army was doomed to failure?

Like many insurgencies, Spartacus’s army lacked cohesion. It split up along several fault lines. There were three main ethnic groups – Thracians, Celts, and Germans – as well as other nationalities including Italians. Although most of the rebels were runaway slaves, some were impoverished free people. Many, perhaps most of the slaves, had been born free abroad and sold into slavery in Italy, but others had been born as slaves and knew no other country than Italy. No wonder Spartacus found it difficult to get the army to unite behind one policy; anyone would have found it difficult. He tried to persuade them to leave Italy but they refused, which doomed them to defeat. It was only a matter of time before Rome fielded a strong enough army to destroy the rebels.

Q. What do you think was Spartacus’s motivation for the revolt? Did he want money and fame? Was it about securing his freedom? Was he hoping to make a political statement about freedom or the aristocracy?

Spartacus and his fellow rebels wanted their freedom. Many of them, including Spartacus himself, fought for their honor. Spartacus was a free man who had been given a terrible punishment. He was enslaved and made a gladiator. Not only was that a virtual death sentence, but it was also a humiliation to have to fight for the entertainment of others.

Q. You traveled to Italy many times to research this story. What was the most fascinating thing you saw or learned? What was your favorite experience?

Here are the Top Ten fascinating things I saw in Italy while researching The Spartacus War:

2. The paved roadbed of the Appian Way in Minturno (ancient Minturnae), north of Capua, which Crassus once lined with the crosses of Spartacus’s men.

3. The possible ruins of Crassus’s fortifications in the isolated Aspromonte Mountains.

4. Gladiator graffiti in Pompeii and Pozzuoli, as well as what’s left of the Spartacus Fresco in Pompeii.

5. The gorgeous Plain of Sybaris, Spartacus’s headquarters when his rebellion was at its height.

6. The Republican-era amphitheater in the windy hills at Avella (ancient Abella), whose extensive remains date to about Spartacus’s period.

7. The view from the Italian shore of the Strait of Messina, near where Spartacus stood, looking across at Sicily.

8. A hike down Mount Vesuvius after seeing a homemade, Italian wild-vine rope, like the ones Spartacus’s troops used to escape down the mountainside.

9. Retracing Spartacus’s steps from Eboli (ancient Eburum) to the Val di Diano (ancient Campus Atinas) on and around the ancient via Annia.

10. The ruins of the Roman city of Grumentum, in a remote location in the Lucanian highlands, in the area where Spartacus’s army marched.

I could also make a list of the Top Ten meals I had in Italy, except that ten would not be enough!

Q. Just how much of the movie “Spartacus” with Kirk Douglas is flat out fiction? Are there any glaring errors in that movie that you’d like to correct?

The great movie gets a lot of things about Spartacus right but it does make some errors. Spartacus did not survive the final battle with the Romans. He died fighting. Although six thousand of his men were crucified afterwards, Spartacus was not, because his body was never found. Finally, the great scene in which Spartacus’s men stand up and proclaim “I’m Spartacus” never happened. It is pure fiction.

Q. When writing about a well-known and beloved subject, do you worry about the reaction of readers because of the attachment to a story they think they know?

Readers turn to history to find out what really happened. They want to learn the truth behind the myths. They only react badly, it seems to me, when historians are debunkers, motivated by an agenda to knock heroes off their pedestals. For me, Spartacus looks even greater, now that I’ve studied the hard world in which he lived.