Nathaniel Philbrick has a new book out: “In the Hurricane's Eye: The Genius of George Washington and the Victory at Yorktown"

Historians in the News
tags: Nathaniel Philbrick, In the Hurricanes Eye 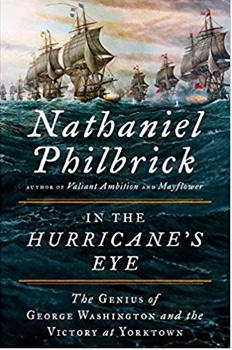 Q: Your two previous books, Bunker Hill andValiant Ambition, have given readers a new way of looking at the American Revolution. With IN THE HURRICANE’S EYE, you return to the subject, focusing on the events leading up to Yorktown, the siege that ultimately broke a years-long stalemate with the British and earned America her freedom. What drew you back to this time-period, and what new, noteworthy, or interesting things will readers take away from it?

A: Even before I finished Valiant Ambition, which ends with the traitor Benedict Arnold’s unsuccessful attempt to surrender the fortress at West Point to the British, I knew I had to see the story of the American Revolution to the end. I was too emotionally involved with all these amazing characters—Arnold, Lafayette, Hamilton, Nathaniel Greene, Henry Knox, and especially George Washington—to simply walk away from the time period. I also knew that what happened next—the action-packed year of Yorktown—made for an incredible story. And being a writer who has always had an interest in the sea, the fact that the victory at Yorktown was preceded by not one but two important naval battles between the French and the British, made this a book I had to write.

Q: In chronicling the last year of the Revolution, an incredibly nuanced portrait of George Washington emerges. Throughout your research, what surprised you most about the general?

A: Our image of Washington is entirely land-bound. We think of him as a Virginia planter, a surveyor, and a general who was almost always astride his horse. But he also had a strong connection to the water, especially when it came to the bays and rivers of his upbringing in the Virginia Tidewater. For most of the war, the Continental army was stationed on the Hudson River, above British-occupied New York. Over the years, Washington developed the habit of steering the vessels that were used to transport his entourage up and down the river, and IN THE HURRICANE’S EYEbegins with an account of him navigating the boat bearing the envoy from France through a dangerous squall. This is not the George Washington with whom most of us are familiar, and it was his understanding of the importance of sea power that ultimately made possible the victory at Yorktown.

I was also surprised by how emotionalWashington was during the year of Yorktown. At one point he erupts in anger at Alexander Hamilton, at another he is literally leaping with joy when he learns that the French fleet under Admiral de Grasse has sailed into the Chesapeake. It was fascinating to watch Washington get whipsawed by the events of that amazing year.

Q: Many readers might be surprised to know that the French weren’t exactly enamored of their American allies. The French leadership was deeply suspicious of the American people’s commitment to the war effort and viewed Washington’s early preference for attacking British-occupied New York as stubborn and myopic. In many ways, the tension-filled political climate during the Revolutionary War was very similar to today’s. What lessons can our current political leaders learn from Washington, who seemed to prioritize America’s alliance with the French over his own ego and setbacks?

A: I think there is a tendency to see America’s alliance with France during the Revolutionary War as a kind of ideal partnership, but it was anything but. Time and again during the year leading up to Yorktown, Washington was driven to near distraction by the actions of the French leadership, but he never let his emotions imperil his relationship with his ally. As Washington said at one point, he was acting on “the great scale,” and he could not allow his personal interests or frustrations to interfere with winning the war. His patience, his ability to lay aside his own ego for the greater good of his country was what won us the Revolution.

Q: In the epilogue of IN THE HURRICANE’S EYE, you note that Washington recognized the pernicious effects of slavery and that he was the only slaveholding Founding Father to free his own slaves. Since slavery is still at the root of some of today’s biggest cultural divides—can you elaborate more on how Washington, at the end of his life and almost clairvoyantly, finally came to realize slavery would threaten the stability of our Union.

A: Even before the Revolutionary War was over, Washington was considering ways of divesting himself of his slaves. But that did not mean he was willing to come out publicly against slavery. In fact, at Yorktown he insisted on the retrieval of the slaves who had escaped to the British, and when he became President he took extraordinary measures to retrieve the enslaved man who fled from his household in Philadelphia. By the end of his life, however, he came to acknowledge (along with Thomas Jefferson) that the biggest threat to the future of the United States came from slavery. Unlike Jefferson, Washington actually did something to make those concerns known by including a provision in his will that freed the 124 slaves he owned at Mount Vernon. It’s only speculation, but I think it’s pretty clear Washington so valued the importance of the Union that he never would have gone the way of Robert E. Lee and taken up arms against the nation he had worked so hard to help create.

Q: IN THE HURRICANE’S EYE is, essentially, the culmination of your twenty-year engagement with American history and its relationship with the sea. Here, you highlight how the Atlantic Ocean, the east coast’s rivers and inlets, fortuitous hurricane’s and other weather patterns set the stage for America’s triumph over the British. Can you elaborate on this point?

A: Since In the Heart of the Sea (2000) I have been making the point that before there was the wilderness of the American West, there was the wilderness of the sea. But I have to say even I was surprised by the impact that water had on the course of the Revolutionary War. As Washington realized from the very beginning of the alliance, the only way to defeat the British was with the help of the French navy. Only then could he break the British navy’s stranglehold on the Eastern Seaboard and win the victory that made possible American independence. Ultimately the course of the war came down to America’s proximity to the sea, the watery realm that I’ve been writing about since I moved to Nantucket 32 years ago.

But for me, it goes back even further than that. I grew up racing sailboats, and in 1973, when I was sixteen years old, I was the youngest competitor in the Sunfish World championships in Martinique, where I sailed in the same bay that sheltered de Grasse’s fleet in 1781. Several months later I raced in the Sunfish North Americans at Fort Monroe, Virginia, at the very tip of the peninsula formed by the James and York Rivers, not far from where the French fleet lay at anchor on the day of the Battle of the Chesapeake. Back then, I was much more interested in racing sailboats than American history, but now it seems like fate that as a teenager I sailed in the same waters plied by de Grasse’s fleet in 1781.

Q: In the book, you suggest that the Battle of the Chesapeake, which made the siege at Yorktown possible, is not only one of the most important naval engagements in the history of the world but also one of the most misunderstood. What is so unique about this battle?

A: The Battle of the Chesapeake is often looked to as a mere warm up for the main event at Yorktown, but in reality the siege would have never taken place without the French naval victory, a battle fought without a single American ship. It may not be the message a lot of Americans want to hear, but we wouldn’t be an independent nation without the intervention of the French navy, whose heroic performance at the Chesapeake made the more famous victory at Yorktown a mere fait accompli.

Another point: Although de Grasse rightly gets a lot of the credit for this historic victory, he did make several strategic and tactical mistakes before and during the battle. As de Grasse later acknowledged, it was Captain Louis-Antoine de Bougainville and the handful of ships in the French vanguard that did all the fighting. For my money, Bougainville (who was the first Frenchman to circumnavigate the globe and for whom the Bougainvillea flower is named) is the unrecognized hero of the Battle of the Chesapeake.

Q: You spent the better part of a decade studying, researching, and writing three books about the American Revolution. With the third book now finished, are there one or two things that you’d like readers to understand that might contradict what they were taught in the classroom?

A: When I was growing up, the story of the American Revolution was about how a group of citizen soldiers rose up to defeat the mightiest military power on earth and thereby threw off the shackles of British tyranny and won us our independence. But as I’ve come to understand, it’s a lot more complicated than that. The citizen soldiers may have started the Revolution, but it was the French that finished it—something that would have never happened without George Washington’s realization that victory depended on the intercession of a powerful ally. From the very start, this country depended on other nations—something that is as true today as it ever was.

Q: How did it feel finishing this trilogy after spending so much time and energy studying it?

A: It’s strange, but I was gripped by an overwhelming sense of sadness. After close to ten years with these characters it was hard to let them go. I had become so involved in Washington’s story that I had hoped he would finally find some well-earned peace at the end of the war. But Congress made sure that wasn’t going to happen when its delegates failed to provide the Continental army with its promised pay, creating wide-spread discontent among his officer corp.

I ended up finishing IN THE HURRICANE’S EYEon Christmas Eve, the same day of the year that Washington returned to Mt. Vernon after surrendering his commission to Congress in Annapolis. Needless to say, it was a different kind of Christmas for me after eight years with His Excellency and the American Revolution.

My wife Melissa and I and our dog Dora are going on a road trip. When Washington was elected President in 1789 he realized that something needed to be done to create a sense of solidarity in the new nation, so he decided he must visit all thirteen states. It was a journey that took him as far north as Portsmouth, New Hampshire, and as far south as Savannah, Georgia, and we’ve already begun following in his footsteps. It’s going to be a different kind of book for me, part travelogue, part history. I can’t wait to get back on the road.