Review of A. Wilson Greene’s “A Campaign of Giants: The Battle for Petersburg”

John Reeves is the author of The Lost Indictment of Robert E. Lee: The Forgotten Case Against an American Icon (Rowman & Littlefield, 2018). 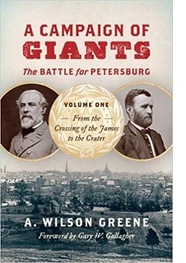 The Army of the Potomac suffered devastating and demoralizing losses during the Overland Campaign in 1864. From the crossing of the Rapidan River in Virginia on May 4 until the closing days at Cold Harbor in June, the army experienced roughly 55,000 casualties. In just one hour on the morning of June 3, the Union lost 3,500 men. Shortly after that debacle, the Fifth Corps commander, Major General Gouverneur Warren, wrote to his wife, “If there were no limit to the number of men we could continually waste in battle I might be more hopeful. But we have been so senselessly ordered to assault entrenchments that the enemy suffer little in comparison with us and may outlast us.”

Ulysses S. Grant’s relentless fighting style had changed the dynamic in the east and had actually inflicted irreparable harm on Robert E. Lee’s Army of Northern Virginia, despite Warren’s concerns. But the price had been extraordinarily high. Some Union soldiers at the time believed the cost was far too high. A staff officer observed, “the fools have all been killed and the rest think it is about played out to stand up and get shot.” Captain Charles Francis Adams, Jr., the grandson of John Quincy Adams, wrote his father, “We have assaulted the enemy’s works repeatedly and lost many lives, but I cannot understand it…. Doubtless Grant has his reasons and we must have faith; but, certainly, I have never seen the Army so haggard and worn, so worked out and fought out, so dispirited and hopeless.”

Amidst all the hard fighting, Grant made a bold decision after Cold Harbor that would ultimately contribute to the end of the war ten months later. His plan was to disengage his men from the Army of Northern Virginia and then attempt a dangerous crossing of the James River before Lee could respond. Once his army was across the James, Grant would try to capture the city of Petersburg, thereby placing extreme pressure on the Confederate capital of Richmond. In late June, with his army across the James and laying siege to Petersburg, Grant told President Lincoln, “You will never hear of me farther from Richmond than now, till I have taken it. I am just as sure of going into Richmond as I am of any future event. It may take a long summer day, but I will go in.”

The story of Grant’s crossing of the James River and his initial attempts to seize Petersburg is brilliantly told in A. Wilson Greene’s A Campaign of Giants: The Battle for Petersburg.  This book should be required reading for all students of the Civil War. I hope that it finds a more general audience as well. Greene shows us that the struggle to save the Union and abolish slavery was bloody and often quite precarious. In 1864, a member of the Sanitary Commission perfectly captured the significance of the Petersburg Campaign when he wrote, “If future generations do not appreciate the amount which is now expended for the preservation of the Union they will deserve the contempt of the race.”

Greene is a meticulous historian, who provides sensible answers to some of the most contentious questions surrounding the beginning of the Petersburg Campaign. Among the fascinating questions he addresses are: Why did the Union Army fail to take Petersburg on June 15 and 16 when it clearly had taken Lee by surprise? What explains Grant’s disengagement from military operations throughout much of June and July, 1864? Who is to blame for the disgraceful lack of leadership at the Battle of the Crater?

Readers might be surprised by Greene’s portrayal of General Grant. Throughout Grant’s First Petersburg Offensive, the Union general-in-chief was unable to effectively communicate with his two army commanders and their two corps commanders. Despite overwhelming numerical superiority, Union forces failed to take the city. During the four days of fighting from June 15-18, Greene writes, “Grant remained disengaged at City Point, exercising almost no influence on the conduct of the two armies under his command.” Of the crucial day of June 15, Greene also notes, “It is tempting to speculate about what might have transpired had Grant issued Meade, Butler, Smith, and Hancock the same written orders for the capture of Petersburg.” The Second Petersburg Offensive later in June was yet another disaster. Over the timeframe covered in this book, Grant had delegated operational details to Major General George Meade and the results were disappointing. At the end of June, Colonel Charles Wainwright confided in his diary, “Grant has used the army up, and will now have to wait until its morale is restored before he can do anything.”

Greene’s account of the Battle of the Crater is heartbreaking. Lieutenant Colonel Henry Pleasants’s plan to dig a tunnel under a Confederate fort and then blow it up is truly incredible. The idea actually had great promise, though ultimately it resulted in tragedy. Initially, the creation of the tunnel was successfully completed, despite numerous logistical challenges. Pleasants could rightfully claim that he had “projected, undertaken, and completed a gigantic work; and have accomplished one of the great things of this war.” Unfortunately, the strategy for exploiting the aftermath of the explosion was deeply flawed. The Battle of the Crater became one of the greatest disasters in American military history.

On July 30 at 4:44 a.m., the explosion occurred, creating a pit roughly 25 feet deep. One private reported, “But the greatest sight was to see men half buried alive — some with their heads downward & their feet & legs protruding — others with their feet down & buried to their waists & even shoulders with one arm out — and some with neither. Very many were very likely buried entirely alive & others were mangled and torn to pieces.” Union attempts to capture territory beyond the Crater ended in failure for a variety of different reasons. Brigadier General James Ledlie, whose men led the initial assault, disgracefully took shelter in the rear and began drinking rum. Unsurprisingly, he was unable to provide the necessary direction to his men. One officer in the Twenty-Third U.S. Colored Troops noted, “our corps and division commanders being either asleep or drunk did not put in an appearance.” Neither Meade nor Major General Ambrose Burnside, who was Ledlie’s superior, provided the critical leadership on the battlefield either. Greene states, “the offensive lacked a steady guiding hand at both the operational level and the tactical level.”

The consequences of this leadership failure resulted in incomprehensible horror for the African American Union soldiers who participated in the assault. A Confederate artillerist reported that the sight of black troops angered the rebel soldiers who then committed unspeakable atrocities. A South Carolina quartermaster wrote in his diary, “the negro troops were slaughtered without mercy, we not allowing them to surrender, they huddled together in the pit formed by the explosion and our men deliberately capped down on them and beat out their brains and bayonetted them until worn out with exhaustion.” A Union soldier remembered that the Confederate troops “showed no mercy to the wounded negro soldiers…” Greene notes “there were no repercussions from the Confederate authorities, military or civilian, for this wholesale violation of the accepted rules of war.” Grant would later recall that the Crater “was the saddest affair I witnessed in the war.”

The six weeks covered in Greene’s fine book were among the darkest of the entire Union war effort. One northern junior officer said at the time, “I fear the greater part of this ‘heroic army’ would vote for peace at present on almost any terms.” After the Crater debacle, Grant desperately needed to turn things around. Readers will eagerly await Greene’s second volume on the Petersburg Campaign to see how Grant did it.