Review of Jorn Leonhard’s “Pandora’s Box, A History of the First World War”

Mr. Harris is an independent historian and a regular contributor to the History News Network. For more information see www.JamesThorntonHarris.com 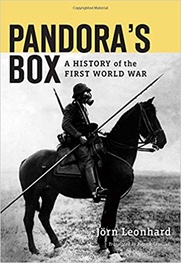 George Kennan, the famous American diplomat and historian, described World War I as “the seminal catastrophe” of the twentieth century. This judgement is reflected in the outpouring of books on its causes and horrors by famous historians including Barbara Tuchman, Martin Gilbert, Niall Ferguson and Norman Stone

With so many books, covering so many angles (e.g. specific battles, new weapons, politics) of the war, can any author provide an account with new insights and fresh information?

With Pandora’s Box, the answer is definitely yes.

In this book, German historian Jorn Leonhard examines the war’s causes and impacts from a 2018 perspective. His review of the war is framed by contemporary issues including gender roles, the “crisis of white masculinity,” the rise of anti-Semitism, racial discrimination and the impact of new communication technologies.

Leonhard, who serves as Friedrich-Schiller Professor of West European History at the University of Freiburg, has previously written many articles on “multi-ethnic empires,” nationalism and German Unification. He has also edited several collections on Western European history. In this, his first book, he displays an in-depth knowledge of the material drawing on a wide range of sources in English, German, French and Italian.

Although he is, of course, a German he does not excuse his nation’s political leaders for starting the war nor does he condone German army atrocities in Belgium and France. He is also, at various points, critical of British, French and Russian leaders.

The United States, of course, entered the war quite late, so the author devotes relatively less coverage to its political and military leadership. He is critical of President Woodrow Wilson, whom he calls a nationalist and racist with “messianic expectations.” According to the author, Wilson was a progressive on domestic affairs but an advocate of military intervention. He expounded the “university validity of democracy” which prompted him to order an invasion of Mexico in 1913. Later, at the Versailles negotiations, he ignored the long-held “principle of national sovereignty” to redraw national borders and remove existing rulers in order to establish new, unstable “democracies.”

The book begins in 1900 with the European powers’ rapid military buildup and continues into the 1920s and the war’s after-effects. Although the book proceeds in a chronological order, the author takes numerous digressions to explore specific topics in-depth, such as “Nearing the Limits, Soldiers between Deviance and Protest, Captivity and Politics.”

This approach allows Leonhard to explore topics in-depth and bring up a new insights and unusual anecdotes. These include:

— As the war dragged on and cases of shell shock soared, many British politicians and generals grew concerned about a “crisis of white masculinity.” They were afraid that the white race in Great Britain had “degenerated” due to industrialization and urbanization and was no longer capable of enduring the ordeal of mass death and catastrophic injuries caused by sustained battle.

In the last two years of the war, with available manpower dropping, Britain appealed to its Asian and Caribbean colonies for troops (it had long used white soldiers from Canada, Australia and New Zealand). When the soldiers from India and Jamaica arrived, however, the British generals, afraid that the growing war weariness and anti-authoritarianism of the front-line British troops might be “contagious,” they kept the black and Asian troops in segregated battalions well in the rear.

— With dramatic newspaper accounts of large battles and scores of wounded men showing up in their home communities, the civilian population became very curious about the conditions in this new, mass warfare. The Germans satisfied the public’s curiosity by recreating a war tableau with real-life trenches in Berlin’s Zoo Garden. Britain mounted a similar display in Trafalgar Square. The crowds viewing the exhibits saw an idealized battlefield, with neat, dry trenches, undamaged shelters and small strips of barbed war. The authorities carefully omitted any sign of mud, blood or body parts.

—The first mosque in Germany was set-up in a POW camp for captured Muslim soldiers. While the Germans created the worship place in an attempt to comply with the Hague Convention of 1907, they also took many photographs of the Muslim prisoners. These were used in propaganda materials depicting an unchristian, “degenerate” enemy.

— In the United States, Harvard abandoned an attempt to build a “Museum of Germanic Culture.” The museum was first conceived in 1897 when German art, music and philosophy were held in high regard. Although the building was almost complete by 1917, construction was halted when the U.S. declared war. Finally finished in 1921, it still stands in the middle of the campus, now renamed the Aldolphus Busch Hall.

In the last three chapters of the book, titled Outcomes,Memoriesand Burdens, the author examines the impact of the war on the major powers.

The war fatally weakened many traditional concepts of political order (e.g. monarchy, empire) but failed to put a new order into place. Instead, tensions grew between competing visions of liberal democracy, Fascism and Communism. Although the Versailles conference attempted to establish new nations based on ethnic identity, it created new set of problems as many dissenting minorities were left within the designated boundaries.

Leonhard cautions against historians who treat World War I as a “chronological block” with a “simple ‘before and after’ ” viewpoint. The causes of the war began in the nineteenth century and the impact of the peace lasted for decades afterward. In fact, no real peace ensued, Leonhard notes, instead new “long-term zones of conflict” emerged in Yugoslavia, the Middle East and Asia.

While Pandora’s Boxwill be valued by military history buffs, it may be too analytical and too long (1080 pages) for the general reader. Because of its many digressions and critical analyses, it lacks the driving narrative of Tuchman’s The Guns of Augustor John Toland’s No Man’s Land: 1918, the Last Year of the Great War.

Readers seeking a basic overview of the war might try the war histories of either Martin Gilbert or John Keegan.