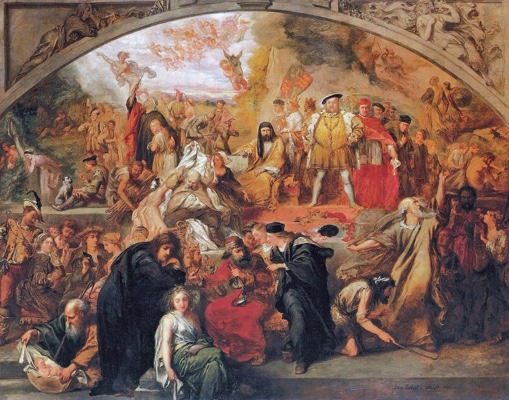 Who wrote Romeo and Juliet? It was not William Shakespeare. Macbeth? Not Shakespeare. Hamlet? Guess again. A group of conspiracy theorists starting back in the 1840s have argued vociferously that any one of a half dozen 17th century writers could have written all of Shakespeare’s plays. Some even suggest that a few of them got together as a committee and wrote his plays.

The champion real Shakespearean playwright, the King of the Elizabethan hill, was Christopher Marlowe. The arguments put forth by the debunkers of the Bard of Avon pushing for Marlowe spew forth in a delightful new play, Marlowe’s Fate, by Peter B. Hodges, that just opened at the Studio Theater on Theatre Row, West 42d Street, New York.

Most historians believe that Marlowe, a brilliant scholar, fabled poet and famed playwright, worked as a spy for the Queen and got involved in a political skirmish for which he was going to be put on trial. Wouldn’t it be nice, the Queen’s strategists reasoned, if young Marlowe somehow vanished? Then, all of a sudden, he was stabbed to death in a bar fight and buried. That was in 1593, right at the start of William Shakespeare’s career. Historians say Shakespeare then went on to write 37 plays, all of them memorable and some, such as Henry V, The Tempest, A Midsummer Night’s Dream, Julius Caesar and Two Gentlemen of Verona, legendary.

No, say the naysayers, and playwright Hodges, that’s not what really happened. The truth is that Marlowe was not killed. His invented “stabbing” gave counselors loyal to the Queen a chance to bury a man said to be Marlowe, faking his death (oh, how many film noir movies used that one?) and then spirit Marlowe out of the country to protect the spy ring. Marlowe had to keep writing, though, so, in hiding, he then wrote his plays abroad – no one knows where – and put the name of William Shakespeare, an oafish Stratford-on-Avon farmer – on them to protect his identity. His plays, er, Shakespeare’s plays, became world famous.

How do we know the Bard did not write his plays? Hodges hugs the time-honored views of the Marlowe conspiracy ringleaders: 1) Shakespeare was uneducated, 2) he was an illiterate, 3) he had no books or any other documents in his home, 4) he knew nothing about the Elizabethan court or politics, so how could he had have written those titanic works of political intrigue? And how could anyone, pushing his quill as fast as possible, finish 37 plays?

There were others who supposedly wrote Shakespeare's plays including, Sir Francis Bacon, Sir Walter Raleigh, Sir Edward de Vere, the Earl of Oxford and William Stanley, the Earl of Derby. There are so many “writers” and conspiracies that an entire society was established, the Shakespeare Oxford Fellowship, to champion their authenticity. Marlowe was their shining knight.

In his play, Hodges says that the friends of Marlowe who wanted to see his work published picked Shakespeare as the “front” because he could be bought off to go along with it and keep his mouth shut. So, over the years he was paid money and given the scripts, which he put his name on and turned in to theaters. The friends of Marlowe convinced the highly respected writer Ben Jonson to vouch for his close friend, Shakespeare.

These arguments are the lynchpins of Hodges’s play, Marlowe’s Fate, that he also directed with great skill. His story begins with the plan to fake Marlowe’s death and get him out of the country. Then Hodges tells a neatly concocted tale of escape, life in hiding and the biggest hoax in world history. He gets wonderful performances from a truly lovable cast. They almost convince you that Marlowe actually did it. The small ensemble of actors includes Brady Adair, Tim Dowd, Thomas Grube, Sarah Kiefer and Len Rella. They are dramatic at times and howlingly funny at others. Even though they work on a small stage and with a sparse set, they put you in the middle of London at the start of the sixteenth century.

The highlight of the play is the mirthful Punch and Judy puppet show in which different Shakespeare wannabe puppets take on the Bard in boxing matches (there is even a “round girl” puppet that draws laughter from the audience). It is a part of delicious staging that works well.

If there was a conspiracy to dupe the public, Hodge’s tale, based on many other stories, works well. Fake death. Hideout far away from the big city. Believable stand-in playwright. Gullible public.

It’s hard to believe, though. Shakespeare was a country boy, uneducated dimwit? Abe Lincoln was a country bumpkin who only went to school for nine months as a kid. Nobody could have written 37 plays? Tennessee Williams wrote 43. No one who did not know the inner workings of the courts and palace could have written all of those political potboiler plays? Mario Puzo, who knew absolutely nothing about the Mafia, wrote The Godfather. These things happen.

One criticism of the theory has never been answered. If Marlowe wrote all those plays and became so famous, why did he never step forward out of hiding to accept the applause? How come no one ever saw him in hiding?

Besides, Marlowe was not even around London in 1600. He was in Dallas, Texas in 1963 and was, everybody knows, the second gunmen in the Kennedy assassination, comfortably perched on the grassy knoll with his rifle. You remember that photo – Amelia Earhart was standing next to him.