The Implications of Voiding the Iran Nuclear Deal

William R. Polk was a professor of history at the University of Chicago. During the Kennedy and part of the Johnson administrations, he was the member of the Policy Planning Council responsible for North Africa, the Middle East and Central Asia. His latest book is Crusade and Jihad: The Thousand-Year War Between the Muslim World and the Global North (Yale University Press, 2018). 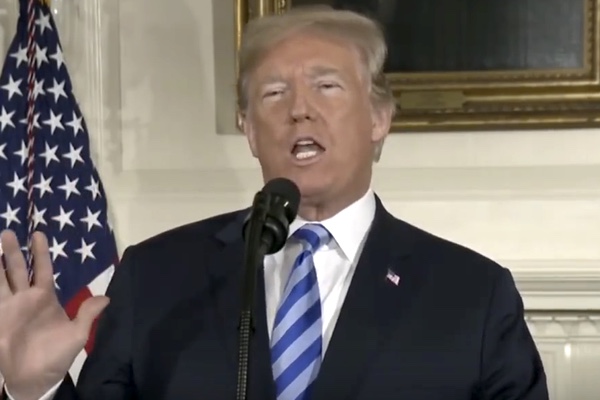 Here are the implications:

Iran would have to be not only stupid but suicidal not to try to protect itself.

What that means, in stark terms, is that it is likely to pay any price to avoid the mistakes of Saddam Husain and Muamar Qaddafi. They either did not have (Saddam) or gave up (Qaddafi) nuclear weapons.

We taught them two lessons:  first, not to have the means to defend themselves (which in our times equates to nuclear weapons) and, second, to trust us to let them live, is fatal.

My experience with the leaders of a number of nations convinces me that they are usually rather sensitive to the danger of being overthrown or murdered.

I am terrified that identified or predictable other states will decide on these bases to acquire nuclear weapons.  I shudder to think of a world of even more nuclear-weapons states.

We have survived with 9 countries’ leaders, some of whom I would not trust with a pistol, having control of a nuclear weapon or hundreds of them.

So far, they have  decided not to attack either one another or someone else.  Albert Wohlstetter, the “big bomb” man engaged as a propagandist by the US Air Force, against whom I often debated at the University of Chicago,  called this the “delicate balance of terror.”

I call it dumb luck.

What we are now living under is frightening enough — that well-informed nuclear weapons practitioner former Secretary of Defense Robert McNamara called it “bizarre.”  As he wrote, "The whole situation seems so bizarre as to be beyond belief. On any given day, as we go about our business, the president is prepared to make a decision within 20 minutes that could launch one of the most devastating weapons in the world…that is what we have lived with for 40 years. With very few changes, this system remains largely intact...”

Either by the delicate balance of terror or by dumb luck, think what it would mean if several more, perhaps half a dozen immediately and ultimately many more nations joined the party.

Then, if any one of their leaders is psychotic (and my experience is that nearly always at least one is),  gets drunk, suffers a bout of depression or sickness, or feels himself in danger, he is apt to “misplay,” as the nuclear wargame players like to say.

This is partly, but not solely, a matter of their possible fear of one another or of us; the result is much more complicated.

Consider something that is rarely discussed:  what a nation with a nuclear weapons inventory has to do to keep it stable.

We know the answer when we think of the cost of buying a car.  If driving it out of the show room costs, say  $20,000, its ultimate cost is perhaps double that over a five-year period.

Think of this in the nuclear weapons issue:  The US Department of Energy admits spending somewhat more that $13 billion/year on maintenance of the nuclear stockpile.  This is probably only a fraction of the cost since much is undoubtedly parceled out to other parts of the government budget.  But even the minimal cost is burdensome and burdensome even to a very rich country like ours.

Consider what this means for poorer countries.  The cost becomes proportionally much greater.

The whole economy of, say, Pakistan is shaped by a similar task. Its number of weapons is of coursesmaller, probably 130 or so.  But the task is to a large extent fixed while the means to meet it tend to be either fixed or less flexible:  Pakistan has a total GDP of about 0.0114 per cent of the US GDP. Thus, for Pakistan to carry out a just a maintenance program on its inventory of weapons requires the diversion of a big slice of the national economy/educated society/public demands/potential for the future/ etc. from other, often politically very pressing, tasks

Moreover, many, and probably increasingly, members of its society will regard the unplanned and undramatic costs not so important as the acquisition of the weapon.  It is like the cost of the automobile: it is bright and attractive while upkeep,  maintenance, protection, prevention of accident are all mostly hidden.  Thus, what in weapons is called “command and control,” is  vulnerable and politicians will find paying for it burdensome.  Cost-saving will surely involve danger-growing decisions.

Even if they favor acquiring nuclear weapons, political leaders are apt to regard the less dramatic but even more demanding tasks of keeping them safe less urgent.  When deciding between building a new school or a hospital, a road or a bridge, a gaggle of jet fighters and putting money and trained people into maintenance of hidden stockpiles, it will be an unusual leader who will flout public demands.   We are lucky that India and Pakistan are not responsive democracies.  They can divert resources to this little appreciated task.

Nuclear accidents, after all, are potentially as dangerous as intended use.  We in America have experienced hundreds of near misses of which at least a dozen could have wiped out a large part of America or wherever our weapons were situated.  And, in some of those I have studied, an accidental explosion would either or both triggered a war and/or devastated a vast area and killed tens or hundreds of thousands of people.

Far-fetched?  Unlikely?  “Crying wolf?”  Surely, this is at least exaggerated.

If you think so, consider just a few dramatic events — perhaps the Russians have had similar near misses.    (I cite older events because the more recent ones are not public knowledge.) Here are a few of America’s:

• A USAF F-86 jet fighter collided with a USAF B-47 bomber over the American state of Georgia on February 5, 1958. The bomber dropped a nuclear bomb rated at 3.8 megatons (that is roughly 45 times the power of the bomb that destroyed Hiroshima).    It had apparently not been properly maintained and did not function as it should have.   It did not explode.  Had it exploded, it would have incinerated an area as large as the center of New York City – 23rd-59th streets, river to river. And, of course, it could as easily have been dropped accidentally on New York as on Georgia.

• A USAF B-52 carrying two 4-megaton bombs (that is a total of 100 times the size of the bomb that destroyed Hiroshima)  broke apart in mid-air over North Carolina on January 24, 1961. One of the two bombs (in the words of the report) “behaved precisely as a nuclear weapon was designed to behave in warfare: its parachute opened, its trigger mechanisms engaged, and only one low-voltage switch prevented untold carnage.”

• On January 17, 1966, a B-52 collided with a tanker aircraft near the Spanish fishing village of Palomares. The tanker exploded and the bomber broke up, dropping 4 nuclear bombs. The non-nuclear explosives (the “triggers” for the nuclear bombs)  detonated on impact but failed to ignite the nuclear fuel. If they had functioned, as they were supposed to do, they would have obliterated a large part of Spain.  One bomb did not detonate at all, and the fourth bomb apparently floated out to sea under its parachute and was never recovered.

• At Thule, Greenland on January 23, 1968, a bomber with 4 nuclear weapons aboard crashed; the “trigger" (a conventional bomb) exploded but did not detonate the nuclear material. It luckily malfunctioned.  One bomb was never recovered.

The point is that despite massive expenditures of money, talent, organization – command and control – things did not work as they were supposed to work.  In these cases, we were lucky that they did not, but one would have to be dangerously naïve to think that luck always will run toward safety.  If malfunctions happen, and where numbers of anything run into the thousands,  they are inevitable, a severed wire, a burnt fuse, a glitch in a computer program…well, you can imagine the rest.

The investigative journalist Eric Schlosser “discovered that at least 700 ‘significant’ accidents and incidents involving 1,250 nuclear weapons were recorded between 1950 and 1968 alone.” There were perhaps a thousands more.  We don’t know about recent events if such occurred.  And this despite our highly trained, and experienced command and control organizations (plural!).  And these events occurred when Americans were able to afford,  and did allocate,  vast amounts of money to prevent accidents.

Bear in mind that we Americans are motivated to carry out such tasks because a significant part of the American business elite makes money by doing so.   This is unlikely to be the case in other countries.

So, what will happen when less rich nations, with less frightened societies and without the profit motive of making safety devices join us in the mad rush to nuclear weapons?   Will North Korea have the ability or will to mortgage its future (or divert resource from manufacturing new and more powerful weapons) to maintain its existing nuclear weapons?  Indeed, feeling threatened as I presume it must feel, will it care enough to do better than the record shows we have done?

We had better ponder that question.

Consider what will come to the fore if another state -- or several states -- join the nuclear club in the already highly volatile Middle East.  Israel is already there.  If Iran follows Israel,  Saudi Arabia says it will not be far behind.  And what about Turkey and Egypt?  If I were Mr. Assad, I would long since have been discussing with Pakistan and North Korea selling, stationing or lending me weapons.  Whose’s next?  How about the UAE?  It has the money and the rest is easy.

President Trump and his bellicose advisers seem oblivious to such considerations.

Are they real?  While few Americans appear to worry about them, it should not tax the imagination to guess that the leaders of other countries will feel that they must worry.  We should remember the words of Pakistani Prime Minister Zulfiqar Ali Bhutto when faced with the apparent threat of India’s nuclear weapons, “we will eat grass if necessary but we will have nuclear weapons.”  Not to do so is to risk the fate of Saddam Husain and Muamar Qaddafi.

So I predict that Mr. Trump’s decision, unless somehow mitigated or reversed, risks starting a stampede toward a nuclear-weapons world.  It is not a world I want.  Even if it is not immediately a world at war, it will be a sort of concentration camp of terror, enervating fear of accident or design, of death and destruction.  Then if it slides into war, it may fulfill f one of the prophecies of Albert Einstein.  As he memorably said, “I do not know with what weapons the next war will be fought, but I know that the one after that will be fought with sticks and stones.”

In conclusion, I ask Mr. Trump:  Would our own safety not be better served to try to create conditions of safety even for those we do not like or with whom we have major disagreements?  I include the Iranian and North Korean governments?   To harm them, we will have to harm ourselves even more.   I hope he will ponder this before it is too late.