The Great Thing the Allies Did as Germany Crumbled

William Lambers is an author who partnered with the UN World Food Program and Catholic Relief Services on the book Ending World Hunger. His writings have been published by the NY Times, HuffPost, The Hill, Baltimore Sun, Cincinnati Enquirer and many other news outlets. 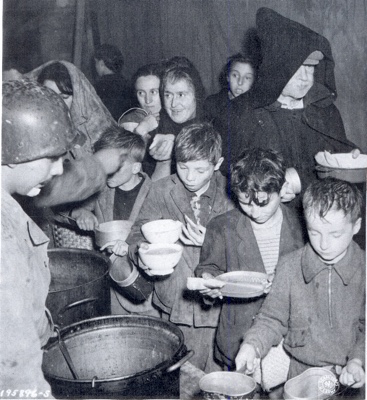 As we remember V-E Day (May 8, 1945) and the Allies victory in World War II Europe, let's also think of the unsung heroes. For throughout Europe there was another war raging against hunger.

US and British pilots heroically airlifted food into the Netherlands, who were starving under Nazi occupation.

Bizzozero exclaimed, “You would have to go into the schools. Schools are the place to go.” Silber replied, “In that way we could furnish milk to children who need it, and at the same time stimulate school attendance.” Soup and vegetables were also provided to hungry school children in Italy.

This emergency school feeding, which the Allies did throughout Europe, is one of the best ways to help the suffering children of war. It’s a lesson we should well remember because at this very moment children are hungry and missing out on education because of conflict.

According to a report by Save the Children, a record 357 million children are impacted by conflict worldwide.

This silent tragedy often goes unseen by the world. We must do more to support feeding programs for the children. As during World War II, school meals can help children in the most desperate of circumstances.

Imagine if today you lived in a town in South Sudan impacted by the war between the government and opposition groups. Your access to farmland is limited because of the fighting. This situation becomes even worse if you are displaced with little or no assets. What will you do for food?

Under such desperate circumstances normal life, like children going to school, simply vanishes.  Your children help you look for food to survive.

And it works. In schools that provided meals, the enrollment and retention rates went up. Hunger went down.  According to the After Action Review of Emergency School Meals in South Sudan, "Teachers reported that prior to the school feeding intervention, children used to leave school early as they felt hungry and or had to support families look for food."

When the Norwegian Refugee Council started two meals a day they noted “Provision  of  two  meals  helped  children  to  stay for  complete  school  day.  Evidence  proves  that  eating breakfast  not  only  provides  children  with  more  energy, but  that they do better in school as they are better able to concentrate and eat more healthily throughout the day. "

Amy Fairbairn of Mercy Corps says "In the seven schools where we provide free school meals, we've seen a 50 percent increase in enrolment, with girls' enrolment having more than doubled."

Fairbairn adds that "We currently have another 46 schools who have requested support but no further funding for these at this time."

If the international community invests in emergency school feeding, many more children can be saved from hunger. They can also get an education.

Gemma Parkin of Save the Children says they are providing emergency school meals in drought affected Ethiopia and Somalia. She tells of Ayan Hussien, a ten -year old girl attending second grade at Werabeso elementary school in Ethiopia.

Ayan says “Before the school feeding program started here, many children including myself often went to school on an empty stomach. Now, we are provided food during the school break and we are no longer hungry."

Gemma says providing food and also water at the schools increases the attendance.

Cathy Diop of WFP says they are "planning to support 185,000 schoolchildren under the emergency school programme." The United States Food for Peace Program is one of the major donors.

But much more funding is needed. Diop says "the home-grown school meals programme has not started yet due to funding shortages."

Emergency school feeding is one of the crucial investments we need to make for children in countries leveled by war and drought.  It's what we did during and after World War II. School meals helped win the peace and rebuild Europe.

Children everywhere should be able to live free from hunger and get an education.  Food and education is hope for children.