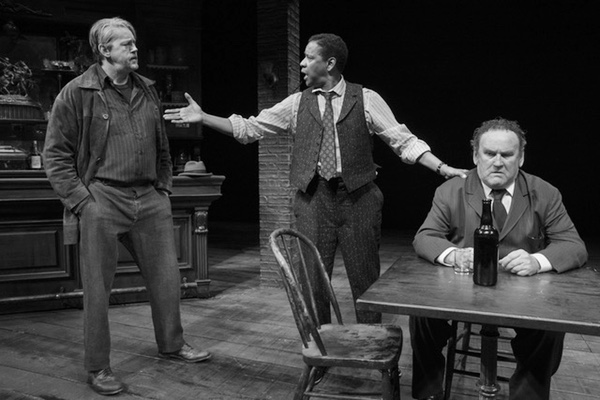 The Iceman Cometh opens at dawn in a New York City bar in 1912. A dozen or so drunks are rambling about their failed lives and awaiting the arrival of their friend Hickey, a salesman who is full of fun and bombast. The flamboyant Hickey always makes them feel better and pushes back the shadows of their alcoholism. They are there, and Hickey will be there, for Harry Hope’s birthday party, a joyful event that should last all night. There is grizzled Harry Hope himself, a man who relies so much on the bottle that he is afraid to cross the street and always runs back to the bar to get another drink. There are several squealing hookers who chatter all morning. There is Larry Slade, who stoically waits to die. There are two ex-soldiers who continually refight the Boer War. There is the talkative bartender who pimps out the two hookers but continually denies it. There is an odd African American who wails about being discriminated against by all whites and yet counts the whites at the bar as his close friends.

They are a motley crew.

They stage a motley first act, too. It is long and tedious and goes absolutely nowhere. Then, like a bolt of lightning, the flashy Hickey arrives. Hickey, played by a superb Denzel Washington, bounces down the aisle from the back of the theater in his boater straw hat, jumps on to the stage, raises his arms to heaven and shouts at the top of his lungs.

He changes everything and right away.

The play suddenly soars with him (and Washington) in it. He is there, he says, and they all say, over and over, to push away their pipe dreams and give them peace in their lives at last, to make them whole. All they have to do is listen to him as he prances and dances about the stage, spouting his little sermons.

The Iceman Cometh, first staged in 1946, is considered one of the finest plays by Eugene O’Neill, one of the world’s finest playwrights. It is long. Oh, is it long. It is so long I think there is a daylight saving time in the middle of it. Altogether, it covers nearly four hours. It is a story of redemption and acquiescence and triumph and tragedy, as most great dramas do. The play opened at the Bernard Jacobs Theater on W. 45th Street in New York last week and it is a soaring, triumphant revival of O’Neill’s legendary work, anchored by a mesmerizing performance by the mercurial Oscar winner Washington, one of America’s great actors.

You could say that the play is a work about men trying to find themselves or an exploration of one man’s soul. It is not. It is a withering attack on drinking, a key issue in the 1912 era. That is obvious right from the curtain. Throughout the play, Harry Hope and others constantly say that they do not want to change their lives or, really, listen to anything Hickey has to say. They just want to “drink and pass out.” You sit there in the audience and remember that in 1919, just seven years after the year in which this play is set, the U.S. Congress passed prohibition, that outlawed public drinking. If you watch this play carefully, you’ll see why.

Playwright O’Neill has written a devastating attack on drinking, showing precisely what it does to men and women. They all sit in the bar, immovable, slumped over on their chairs, desperate for one more breath of air and one more drink. They are absolutely pathetic and it hurts to know, too, now in 2018, that drunks in 1912 did not have the help that alcoholics have today. There was little help for drinkers in the 1912 era, as there was little help for drug addicts. No one knew this better than playwright O’Neill. His mother suffered from drug addiction and his brother died of alcoholism in 1923. His family members, and everyone else, sought help from local doctors, who were bunglers, two steps up from quackery, and had no training to alleviate their patients’ addictions. The group that did help millions, Alcoholics Anonymous, was not founded until 1935. You sit in the audience and get angry at these people on stage, and then, a few minutes later, you pity them. There is no help on the way back in 1912 and they can’t fight it themselves.

Denzel Washington is a wonder of the world as Hickey. He works his crowd of drunks like Elmer Gantry with his sinners, waving his arms, shouting and cajoling and promising them all a better world. He glides across the stage through the crowd of his “friends” throughout the night, reminding them that they have the strength within them to conquer their addiction. Towards the end of the play he pulls out a chair, plants it at the front of the stage and delivers a sorrowful soliloquy about himself. He is sad, he is funny, and throughput the show Washington is downright wonderful.

He has to be, because there is a deep dark secret about his character Hickey. You start to realize that towards the end of act two. You slowly find out that Hickey’s life is nowhere near what you thought it was and what he said it was. Slowly, very slowly, the awful truth about Hickey starts to unravel.

Washington heads up a stellar cast that includes David Morse as Larry Slade, Colm Meaney as Harry Hope, Frank Wood and Dakin Matthews as the soldiers, Nina Grollman and Carolyn Braver as the hookers, Bill Irwin as Ed Mosher, Neal Huff as Willie, Michael Potts as Joe, and Austin Butler as Don.

Despite all of the impressive acting and brilliant writing, The Iceman Cometh is just too long, though. A good 45 minutes could have been cut from the script, mostly in the first act, and the play would have run faster and appeared smoother. You can breathe fire and brimstone into a script, but not for nearly four hours. Everybody needs a bit of editing, and so did O’Neill.

Even so, The Iceman Cometh, and Denzel Washington, are treasures not to be missed and a fine look at alcoholism, and America, in 1912.