Reasons Trump Might Want to Offer to Help Venezuela

Michelle Mayhew-Shears is a PhD candidate in history at Ohio University. 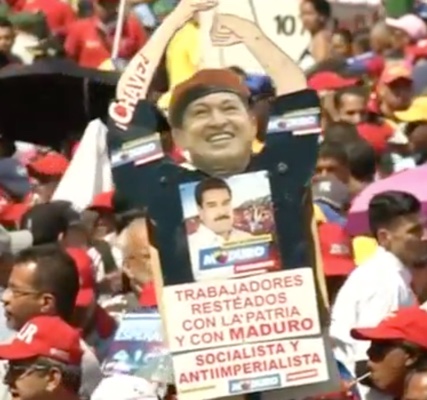 While the Trump administration focuses on restricting immigration and building a wall, there is a crisis occurring in Venezuela that could have devastating effects on the stability of South America. Since the price of oil collapsed in 2014, the value of Venezuela’s currency has plummeted. Hyperinflation, coupled with U.S. government sanctions and the often reckless leadership of President Nicolás Maduro has led Venezuela into increasing turmoil. Meanwhile, neighboring countries have faced an influx of Venezuelan citizens, as desperate men and women search for food and medicine on the black market or seek sanctuary from their imploding homeland. Unfortunately, the Trump administration seems unwilling to address the impending disaster, the hardship that Venezuela’s economic collapse will cause its neighbors and the costs that the United States will eventually pay.

This is not the first time that the United States has failed to see the bigger picture in Latin America. Many US administrations have spoken of the interconnected fortunes of Latin American countries and the need for economic and political cooperation in the region. Yet when any one nation steps too far outside the US model for good behavior, the US government has been willing to act—economically, politically, or otherwise—to bring that nation back to the fold. This was the case in Chile when Salvador Allende was elected to the presidency and US president Richard Nixon responded by trying to make the Chilean economy “scream.” It was also the case in Nicaragua when the Sandinistas finally gained power in 1979 after ousting the corrupt Somoza dictatorship. President Ronald Reagan worked to prevent further revolution in Central America by arming the Contras and thereby encouraging the continuation of a war that raged for years and took tens of thousands of lives.

In both of these situations, other nations in Latin America also suffered. When Nixon squeezed the Chilean economy, he strongly encouraged Latin American countries to squeeze too—and inter-American trade suffered. When the Reagan administration armed the Contras, the violence didn’t stop at Nicaragua’s borders. Honduras, where the Contras trained and camped, was heavily impacted, as were other countries in Central America.

Yet knowing this history gets us no closer to a solution if the Trump administration acts in the same way as its predecessors. What should the current administration do to deal with the economic and social chaos in Venezuela? Surely, we can’t expect Trump to stop criticizing Maduro for maintaining a socialist government. But he may not have to. With elections scheduled this May, Venezuelans may vote Maduro out of office and replace him with a government friendly to the United States. Of course, even then, the new government would face immediate challenges that it would be unlikely to meet and it, too, might face collapse. After all, starving people don’t tend to care who is in power. What they care about is feeding their families.

So what should the US do? First, the Trump administration should acknowledge that there are people starving in a country where food could easily be supplied. President Trump could loudly and publicly offer Maduro food aid. Maduro will decline, defending his position that the US is the cause of Venezuela’s food shortages. Offering the aid would serve dual purposes. First, it would improve the image of the United States in the region. Second, it would allow preparations to be made should the opposition unite and manage to defeat Maduro. In addition, Trump should consult with and listen to Venezuela’s neighbors. What do they need? Are there ways the US can help? It’s true that the US may not be able to get any aid into Venezuela, but listening and responding to its neighbors could help to promote stability in the region even as Venezuela itself experiences chaos.

Even if the United States takes these actions, it may not be enough to prevent Venezuela’s economic collapse, but doing nothing could cost the US more than just declining influence in the region. If Venezuela continues on its current trajectory another refugee crisis is likely. While the immediate impact would be felt by Venezuela’s neighbors, the long term effects would be borne by the United States as it is forced to make difficult decisions about admitting new immigrants from Venezuela. It’s clear that there is no ideal solution, but even in the age of America First, it still pays to be a good neighbor in Latin America.