Review of Michael K. Honey’s “To the Promised Land: Martin Luther King and the Fight for Economic Justice”

Robin Lindley is a Seattle attorney, writer, and features editor for the History News Network (hnn.us). He investigated the death of Dr. King as a staff attorney with the Select Committee on Assassinations, U.S. House of Representatives. His email: robinlindley@gmail.com 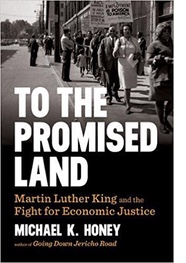 Half a century ago. April 4, 1968. Memphis, Tennessee. At 6:05 PM an assassin’s bullet fired from a high-powered rifle struck Dr. Martin Luther King, Jr., as he stood on the balcony outside his second-floor room at the Lorraine Motel. He was thrown to the balcony surface. An hour later, the 39-year-old visionary champion for human rights was pronounced dead at St. Joseph’s Hospital.

Most Americans remember King as an eloquent leader of the movement for racial equality and civil rights. But King also focused on economic justice, an often overlooked yet still timely aspect of his legacy. Economic concerns drew King to Memphis in 1968 where he stood with 1,300 striking sanitation workers who called for a living wage, better working conditions, and union recognition. For King, these workers epitomized the issues of poverty and economic injustice he planned to address with his unfolding Poor People’s Campaign.

In his groundbreaking new book To the Promised Land: Martin Luther King and the Fight for Economic Justice, University of Washington history professor Michael K. Honey examines King’s life through the lens of his efforts to address poverty and inequality. Honey is an authority on civil rights and labor history, a former civil rights organizer, and author of several books including the definitive history of the 1968 Memphis Strike, the award-winning Going Down Jericho Road. (I interviewed him in 2017.)

As Honey writes, King’s concern for the suffering of the impoverished and the travails of working people compelled his lifelong crusade for fundamental economic and social change. He was a compassionate child who witnessed the brutality of racism in the Jim Crow South. His father, Rev. Martin Luther King, Sr., taught him to respect poor and working people. As a teenager, he worked on a tobacco farm and said, “I saw economic injustice firsthand, and realized that the poor white was exploited just as much as the Negro.”

King became a Baptist minister who served in the tradition of the black Social Gospel that applied Christian ethics to social problems and recognized the gross inequities between rich and poor and the suppression of worker rights. In college and graduate school, he studied Gandhi’s philosophy of nonviolent resistance and found that nonviolence “was one of the most potent weapons available to oppressed people in their quest for social justice.” These beliefs underpinned his future campaigns, starting with his leadership of the Montgomery, Alabama, bus boycott that led to desegregation of the transit system by late 1956.

King was also a champion of unions, as Honey stresses. By 1957, King began forging relationships with unions committed to civil rights. His concern for economic rights was interwoven in his continuing work for racial equality. He believed that a coalition of the “Negro freedom movement” and the labor movement could change the segregated South, as he worried that, without a powerful interracial labor-civil rights coalition, labor would be driven to impotency by forces on the far right.

King’s historic “I Have a Dream” speech was delivered during the “March on Washington for Jobs and Freedom” on August 28, 1963 as he stood in front of the Lincoln Memorial and spoke to a crowd of hundreds of thousands. As Honey reminds readers, this march was an effort to advocate for the civil and economic rights of African-Americans and was organized by a coalition of labor, civil rights and religious groups. In his speech, King proclaimed that black citizens were stranded “on a lonely island of poverty in the midst of a vast ocean of material prosperity.”

After adoption of the Civil Rights Act in 1965 and the Voting Rights Act in 1965, King’s energies shifted to addressing racism in the North and the “evils” of militarism, materialism, and economic injustice. He sharpened his critique of rapacious capitalism and the resulting suffering of the poor and working people, and he called repeatedly for economic restructuring and a “true revolution of values.” He also protested a futile and wasteful war as social programs were “shot down on the battlefields of Vietnam.”

He had faced beatings, arrests, jail terms, and frequent death threats through his adult life. White supremacists were obvious foes, but more painful for King was abandonment by his former allies in his final years. Moderates urged him to stay in the civil rights arena and rejected his anti-war and radical economic agenda while black militants believed he was too passive and conciliatory.

And, as Honey details, for the last decade of his life, King was also under constant surveillance by the FBI. The Bureau’s Director, J. Edgar Hoover, was open about his loathing of King and publicly called him the “most notorious liar” in America. King was aware that the FBI followed his movements every day, bugging his rooms and tapping his phones, and even creating anti-King editorials that were published virtually verbatim by newspapers such as the Memphis Commercial Appeal.

Despite the threats and hounding and undermining, King courageously continued his efforts for human rights as he planned the interracial Poor People’s Campaign and heeded the fateful call to Memphis where he joined the striking sanitation workers. He told these representatives of the working poor, “Now our struggle is for genuine equality, which means economic equality.”

Honey’s book offers a lively, inspiring, and carefully researched study of King’s efforts for economic justice, reminding readers of this seldom-documented but crucial aspect of King’s legacy. To the Promised Land also vividly recounts the story of King’s life and work and the influence of his philosophy of nonviolence and social Christian mission as it provides insights for activists today. Although not a comprehensive biography of King, an extensive list of resources provides ample material for further study of his life and times.

To the Promised Land is especially timely and revelatory as we struggle still with racism, militarism, poverty, and extreme economic inequality 50 years after the death of King. Although his dream for the poor and working class has not been realized, his nonviolent resistance to all forms of oppression continues to inspire.