Eisenhower Ended the Korean War in 1953. Trump Could Learn From His Approach. 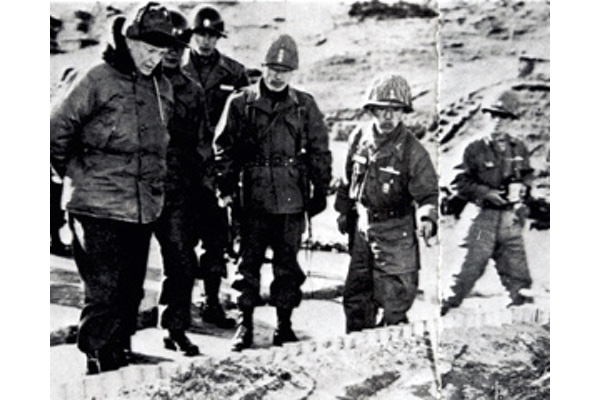 Eisenhower in Korea with General Chung Il-kwon, and Baik Seon-yup, 1952

The Korean War began in 1950 when Communist North Korean leader Kim Il-sung, Kim Jong-un's grandfather, suddenly invaded South Korea in a bid to take it over. American forces, acting under a United Nations resolution condemning the aggression, along with small numbers of troops from other nations, drove the North Koreans out and invaded that country. But North Korea's ally China, which shared a border with North Korea, then intervened, pushing the U.S. forces back.

By late 1952, the two sides faced each other in a stalemate at the 38th parallel not far from the original North-South Korean border before the war began.

The war was at an impasse. President Harry Truman's administration had no good military options.

But the Republican presidential nominee in 1952, former general Dwight D. Eisenhower, in an October 24 campaign speech, dramatically declared "I shall go to Korea" and end the war. That electrifying promise helped get him overwhelmingly elected the next month.

As in 1952, there’s been a stalemate in the conflict between North Korea and the US. Years of economic sanctions and military threats against the North Koreans to get them to drop their nuclear missile development didn’t work. That made the surprise March 8 announcement of the planned Trump-Kim meeting all the more dramatic.

It was almost as much of a bombshell as Eisenhower's "I shall go to Korea" promise.

Eisenhower, who had led the Allied coalition that defeated Germany in World War II, always sought fresh, objective information. That is another lesson Trump can learn from Eisenhower.

Making good on his campaign promise, and with the reluctant approval of President Truman, President-Elect Eisenhower made an unannounced trip to Korea on December 2, 1952. He spent three days on the front lines. He conferred with commanders, ate meals with the troops, watched an artillery duel through field glasses, and visited an army surgical hospital where wounded soldiers were being treated. He flew along the battle line, roughly the 38th parallel, in a military observation plane, to get a good look at the terrain. It was mountainous, rocky, desolate, snow-covered and bristling with dug-in Chinese troops and gun emplacements. It reminded him of Tunisia, where American forces had sustained heavy casualties in fighting the Germans during World War II.

By the time he returned home a few days later, Eisenhower was determined to end the war. "My conclusion as I left Korea was that we could not stand forever on a static front and continue to accept casualties without any visible results," he recalled in his memoirs, Mandate For Change. "Small attacks on small hills would not end this war."

3. Presidents may need to persuade or overrule their own advisors.

President Trump fired Secretary of State Rex Tillerson on March 13 after media reports of policy differences and personal tensions between the two men. Presumably one of the reasons for Trump's action was that Tillerson did not agree with Trump's approach to the Korean situation. That is ironic, because Trump had mocked Tillerson for advocating a diplomatic solution, exactly what Trump seems to be promising now.

Eisenhower sometimes overruled his advisors but kept disagreements private. General Mark Clark, one of the commanders in Korea, tried to convince Eisenhower to initiate a massive new offensive. "I know how you feel, militarily," Eisenhower told Clark," but I have a mandate from the people to stop this fighting. That's my decision."

John Foster Dulles, whom Eisenhower appointed as Secretary of State when he took office in January 1953, insisted that the Chinese must be defeated to ensure American credibility in the world. Eisenhower overruled him. "If Mr. Dulles and all his sophisticated advisors really mean they cannot talk peace seriously, then I'm in the wrong pew," he told an aide. Dulles got behind the negotiations.

Trump will need exceptional negotiating skills to get the North Koreans to drop their threats and to get the South Koreans, Japanese, and Chinese to go along with whatever deal he makes.

Eisenhower pressured South Korean leader Syngham Rhee to drop some of his demands in order to speed the peace process. When Rhee hinted he might continue the fight alone, Eisenhower threatened to cut off fuel and supplies that the Americans had been furnishing. Rhee came around.

Eisenhower pressured the North Koreans and Chinese governments to agree to an armistice. He initiated a buildup of American forces in Korea, ordered a number of offensive actions, and instructed General Clark to speed up a prisoner exchange, an important step toward an armistice.

Eisenhower's actions confirmed that he would not back down and pull out.

The enemy was getting weary. North Korean and Chinese casualties had been high. China did not relish further entanglement in the war and wanted to withdraw now that the Americans had been driven away from its border with North Korea.

The Soviets, who had supported Kim Il-sung, had grown tired of supplying the North Koreans with weapons and ammunition. Longtime Soviet leader Joseph Stalin died on March 5, 1953 and the nation's new leaders wanted to disengage and concentrate on other things.

Some Eisenhower biographers, such as Jim Newton, in his book Eisenhower: The White House Years, assert that the Administration secretly let the Chinese know that it was prepared to use nuclear weapons if necessary to end the war. Eisenhower did discuss the possible use of such weapons in cabinet and National Security Council meetings. But William I. Hitchcock, in his new book The Age of Eisenhower: America and the World in the 1950s, convincingly demonstrates that no nuclear threats were actually made. The Chinese, North Koreans, and Russians were simply tired of the war and, given American firmness demonstrated by Eisenhower, knew they could not prevail.

5. Explaining the issue to the nation is essential.

Skirmishes in the war continued until a truce was signed on July 26, 1953. Korea was divided along the existing battle line, roughly the 38th parallel, a border that persists to this day.

Eisenhower had prepared the way, including patient discussions with conservatives in his own party who wanted a decisive victory against Communist aggression. Pushing the North Koreans out of South Korea was a victory of sorts, the president explained in public statements. It demonstrated American determination to oppose aggression.

Eisenhower explained the armistice in a masterful radio and TV address to the American people on July 26. Eisenhower expressed gratitude for the end of the fighting. He praised the troops and lamented the "incalculable" cost of lost lives. He pledged the nation's "lasting devotion and care" of widows and wounded soldiers.

Eisenhower also reminded Americans that there would be challenges ahead and the nation would need to meet them with resolve. "We have won an armistice on a single battleground--not peace in the world. We may not now relax our guard nor cease our quest."

He ended with an appeal to American history and pride, quoting a speech from Abraham Lincoln as the Civil War was ending: "'With malice toward none, with charity for all, with firmness in the right as God gives us to see the right, let us strive on to finish the work we are in . . . to do all which may achieve and cherish a just and lasting peace among ourselves and with all nations."

As Jean Edward Smith notes in his book Eisenhower in War and Peace, Eisenhower "ended a three-year, no-win war in Korea with honor and dignity."

Trump does not seem up to the Eisenhower standard of statesmanship.

But if he can negotiate a resolution of the North Korean crisis, his claim to be a consummate deal maker would be strengthened.