A Nuremberg Judge Looks Back: A Play About Attorney General Francis Biddle and His Secretary 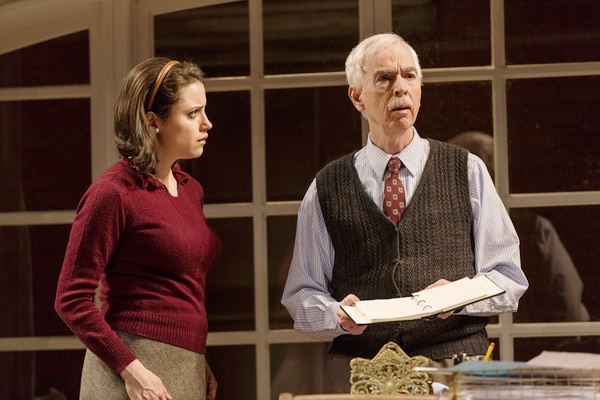 You have to grit your teeth at Francis Biddle, 81, the former Attorney General of the United States under Franklin Roosevelt and chief American judge at the Nuremberg trials, when you first see him in the play Trying, that just opened at the George Street Playhouse in New Brunswick, N.J. He is such a stodgy old curmudgeon. He has a new secretary, Sarah, the latest in a long string of them, to help him answer his mail and write his memoirs. He is condescending to her, makes fun of her, berates her, barks at her in the morning and yells at her in the afternoon. He tells her he can’t be bothered with her marital problems or emotional troubles, does not want to hear any complaints from her and needs her to do a million things for him, usually all at the same time.

Tough-nosed Sarah, well aware of the Judge’s prominence in American history, and that of his Philadelphia family, stands her ground, though. She won’t let the cranky aging statesman bully her, as her father had bullied her for years in her native Saskatchewan, Canada. She puts him in his place, always with a “Sir” at the start of her own raging defense. After a while, the two become friends and start a wonderful and instructive relationship that everybody whose sees this tender, emotional and loving play, a gem of a drama, will love. You cannot sit through this show without a tear sliding down your cheek.

It is doubly good because the playwright who wrote Trying, Joanna McClelland Glass, is the actual secretary in the play. You want true history? How much truer can it get than this?

Her work is impressive, too, because although Sarah is her, she manages to set the secretary off as an independent character.

When we first meet the distinguished former judge, who started his career as a clerk to Supreme Court Justice Oliver Wendell Holmes and served as Solicitor General, head of the National Labor Relations Board, a Court of Appeals Judge under Franklin Roosevelt prior to Nuremberg, and Attorney General, and wrote a biography of Justice Holmes that was turned into a movie, he is fragile. He barely makes it up and down the stairs to his office, a handsomely designed room with a gloriously huge window on the second floor of his home. He bobbles and wobbles across the room, sits down and rises very carefully. He constantly forgets things and is embarrassed that he does. He wants to make telephone calls to people he just called. He can’t find people’s names in his phone book and can’t wait to talk to people that Sarah reminds him are dead. He is very much afraid of dying and tells his secretary that he “sees the big exit sign” on the wall.

“I’m a bugger for work” Sarah says upon her arrival at the judge’s cluttered office. That brash statement sets the stage for their personality combat that continues throughout the play.

There are some good looks back at the Judge at Nuremberg, such as his remark that Herman Goering looked like a man sitting “in faded clothes” at the trial. Someone said Nazi leader Rudolf Hess was a psychotic. “That’s like saying Hitler was not well adjusted,” snapped Biddle.

It is 1967 and 1968 in the play and Biddle and Sarah discuss the San Francisco “flower children,” Bobby Kennedy and the assassination of Dr. Martin Luther King., Jr.

It is sort of like Pygmalion, where the old professor mentors the charming young girl and gets her to bloom and is happy that all adore her. It is this relationship between the old man and young girl that carries the play.

Historic note: the folks at the theater have constructed a wall in the lobby upon which many of the Judge’s quotes are printed, such as his opposition to the internment of the Japanese in California during World War II, his dim view of Adolf Hitler and firm belief that America is strong because of its immigrants. The quotes are stirring.

Also stirring is the superb work of director Jim Jack. He not only stages an enjoyable historical story but gets everybody in the audience to fall helplessly in love with the Judge and the secretary. He gets memorable performances from Philip Goodwin as the Judge and Carly Zien as Sarah. Goodwin is especially impressive because he takes on all the mannerisms of an 81-year-old man, such as the wobbling walk, cracking voice, nodding head and shaking hands. He goes from being, well, pretty crotchety and becomes highly admirable by the end of the story, tenderly holding Sarah’s hand when she is troubled. Zien is a delight as the perky, determined girl, clench-fisted and frustrated all the way, determined to stand up to the famous Nuremberg judge. There is a lot of pathos and love in her performance and in a way you are glad that she was there to take care of the Judge in his last days.

In the end, Judge Biddle’s race is run, and the race of hard working and charming Sarah is just starting. You know it will be a good one.

So, here’s a toast to all the hard-working young women in the United States, in 1968 and now, and to every lovable man and woman in their eighties that you ever met.