Review of “Lest We Forget: The Great War” by Michael W. Robbins

David Kindy is a lifelong lover of history, living in Plymouth, Mass. A former award-winning journalist, he has read, studied and researched a wide range of historical topics, including the Pilgrims, American Revolution, Civil War and World War II. 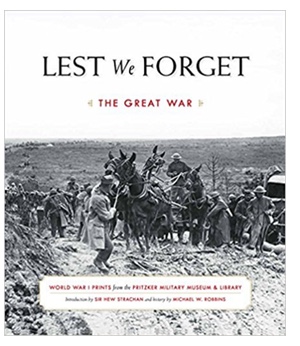 The words “beauty” and “The Great War” seem rather incongruous when used in the same sentence, yet they fit perfectly when describing a new coffee-table book featuring World War I prints from the Pritzker Military Museum & Library.

“Lest We Forget: The Great War” is a sumptuous volume about “the War to End all Wars.” Written by Michael W. Robbins with a forward by Sir Hew Strachan, this ample book offers an in-depth look of World War I as viewed through the stunning poster collection at this major military museum and library in Chicago.

Used primarily for propaganda, posters were employed around the globe to encourage enlistment, demonize the enemy, increase public fervor and otherwise engage the common man in the war effort. During World War I, modern lithography and professional paintings elevated posters from mere handbills to influential works of art. Many are iconic of this era and set the tone for future artistic works as well as ushering in the age of modern marketing.

Michael Robbins, former editor at MHQ: Military History Quarterly and Military History magazine, worked closely with the Pritzker Military Museum & Library to develop the writing and coordinate it with the selection of posters. His wife Wendy served as an art director on the project, helping to determine which few of the hundreds of posters would make it into the book.

“The Pritzker Library has more than 800 original posters,” he said during a recent interview. “It is the largest collection of World War I art in the world – and a first-rate collection at that. Getting it down to the 160 or so posters we used in the book was a tough job!”

The posters are spectacular. Vibrantly colorful and exquisitely rendered, these impressive illustrations and paintings incited young men to defend their countries and inspired the populace to contribute their meager savings and possessions to conquering the enemy.

“I hope it gives readers an appreciation of the skill of propaganda that was developed during the war,” he said. “The posters were successful in presenting a single idea while conveying other extremely complex concepts of nationalism and pride.”

With the posters as a background, Robbins does a wonderful job of distilling World War I’s spider web of political machinations and four years of brutal battlefield carnage into a 30,000-word narrative. The book flows through the pre-war intrigue and entangling alliances to the stalemate of slaughter caused by technological advances in weaponry and the inability of military commanders to develop new tactics.

Even for an accomplished historian such as Robbins, there were new things to learn. As he delved deep into World War I for the book, he discovered historical nuggets that were eye-opening even to him.

“Some of my research surprised me,” he said. “I know a lot about the Great War but the scale of some of the operations was revealing. I was unaware of certain actions on the Eastern Front early in the war. The battles in the Carpathian Mountains between the Austrians and Russians were new to me. Both sides suffered some 2 million casualties in the winter of 1914-15 as these two enormous armies clashed in conditions that defy description.”

The book, which will be released April 11 – exactly six months before the 100th anniversary of the end of World War I – is a superlative reference volume for the bloody conflict that presaged a tsunami of political and social change at the beginning of the 20th century. Robbins has provided a new generation with insight and reflection of an era that shaped the world we live in today.

“This was a war that changed our world – politically, technologically and geographically,” Robbins noted. “The map of the world was altered forever. It set the course for events that would shape the future of the 20th century and continue to influence us even today.”

“Lest We Forget: The Great War” includes 166 print reproductions, along with 180 photos and maps – only a small percentage of the Pritzker Military Museum & Library’s World War I stunning collection. The book is the result of a partnership between the museum and the United States World War One Centennial Commission, created by the U.S. Congress and signed into law by President Barak Obama.

It serves as a companion book to a major exhibit at the Pritzker Military Museum & Library now through mid-2019. “Lest We Forget: Sailors, Sammies and Doughboys Over There in World War I” explores the experiences of those who served in World War I and the role the United States played in ending the first global conflict. The exhibit features the fabulous posters, along with photographs, maps, rare books, artifacts and film from the era.