Review of Elaine Weiss’s “The Woman’s Hour: The Great Fight to Win the Vote” 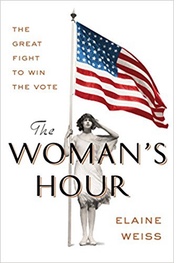 Just in time for Woman’s History Month, The Woman’s Hour by Elaine Weiss tells the story of how Tennessee became the thirty-sixth state to ratify woman’s suffrage and made the Nineteenth Amendment the supreme law of the land. Although we know the outcome of the ratification struggle, Weiss is a skilled journalist and writer who knows how to build suspense into her historical account. While her work is based upon solid archival research, Weiss is primarily a story teller, and the tale of Tennessee’s ratification debate is not generally well known, offering the author an opportunity to broaden the knowledge base of her readers. Some academic historians may criticize Weiss for her narrative rather than analytical history of suffrage, but this somewhat old-fashioned approach to history will be appealing to more general readers and provides an example of how the past may be employed to reach a more diverse audience beyond the narrow confines of the academy.

The Woman’s Hour concentrates upon three major protagonists who arrived in Nashville during the summer of 1920 to lobby the Tennessee state legislature on woman’s suffrage: Carrie Catt, the legendary president of the National American Woman Suffrage Association (NAWSA), who was seeking to complete the work of Susan B. Anthony and Elizabeth Cady Stanton; Tennessee suffragette Sue Shelton White, who represented Alice Paul’s more militant National Woman’s Party that had split from the NAWSA; and Tennessee school teacher Josephine Pearson, who served as president of the Tennessee State Association Opposed to Woman Suffrage. Weiss also presents a strong supporting cast of women, including Anne Dallas Dudley, Catherine Talty Kenny, and Abby Crawford Milton of the NAWSA; Charlotte Rowe whose acid tongue and pen scoured the suffragettes and depicted the struggle against ratification as a crusade to save Western Civilization; and Anita Pollitzer and Betty Gram of the National Woman’s Party—health considerations and a lack of funds made it impossible for the party’s founder Alice Paul to reach Nashville.

Men, of course, occupy a key place in Weiss’s narrative for they were the ones casting the votes on whether to expand the suffrage. Although many suffragettes distrusted Tennessee Governor Albert Roberts, Weiss concludes that his support for the Nineteenth Amendment likely cost him re-election. Weiss also offers praise for state legislators Harry Burn and Banks Turner who resisted tremendous pressure to provide the margin of victory for the amendment in the Tennessee House. She is less kind toward Speaker of the House Seth Walker who abandoned the suffrage cause to lead the movement against ratification. Weiss suggests that Walker may have been influenced by railroad and liquor interests who feared the crusading zeal of female voters. Weiss also credits President Woodrow Wilson and the 1920 Democratic Presidential candidate James Cox with supporting the suffrage effort in Tennessee, but she concludes that the comments of Republican nominee Warren Harding were ambiguous at best.

Weiss also places the Tennessee ratification debate within historical context by examining the history of the woman’s suffrage struggle in the United States, noting that suffrage pioneers Stanton and Anthony did not live to see the fruits of their labor realized with Tennessee’s ratification of the Nineteenth Amendment. Political change does not come easily and requires considerable resiliency as the work of Catt, Stanton, Anthony, and Paul indicate. It will be interesting to see whether the contemporary children’s crusade for gun control legislation will demonstrate an appetite for the long haul as exhibited by such reforms efforts as abolitionism, woman’s suffrage, the Civil Rights Movement, and the struggles of the LGBTQ community. And the extreme passions unleashed by the suffrage debate in Tennessee suggest that the intense partisanship of contemporary political debate is hardly anything new. Some opponents of gun control insist that regulation of firearms and ammunition is, similar to government involvement with health care, the entering wedge of socialism into the fabric of American liberty and individualism. Weiss documents that anti-suffrage leaders portrayed the vote for women as evidence of Bolshevism seeking to destroy the American family and pave the way for communism and collectivization. Similar arguments were made in the 1970s against ratification of the Equal Rights Amendment. What was somewhat different in the Tennessee debate was the degree to which opponents of suffrage openly appealed to racism.

Raising the specter of Reconstruction and passage of the Fourteenth and Fifteenth Amendments, Tennessee legislators asserted that they would protect state rights and the Southern Lost Cause against the imposition of federal authority and racial equality. Opponents of woman’s suffrage painted a dire portrait of black women attempting to vote alongside white women, with the threat of the federal government employing force to protect black suffrage. Chronicling the uneasy alliance between white female reformers and advocates for abolition and black rights, Weiss notes that the suffragettes in Tennessee failed to challenge the champions of white supremacy and sought to separate themselves from black suffragettes such as Juno Franklin Pierce. Of the suffragette compromise on the race issue, Weiss writes, “They might not have the vote, but they had familial ties, social standing, and elite education and connections. Most important, unlike the black men and women petitioning for fundamental dignity and rights, the Suffs were not despised for their skin color or dismissed as lesser beings, they did not bear the perpetual scars of slavery” (137).

While critical of how the suffragettes handled the race question, Weiss still commends the courage and commitment the suffragettes demonstrated in confronting the male political patriarchy in a Southern state like Tennessee. The suffragettes were subject to social ostracism, arrest, and even death threats. And their sacrifices have certainly contributed to a nation where young women have an opportunity to reach their full potential, but Weiss also recognizes that there is much to be done before gender equality is achieved in the United States. While the NAWSA evolved into the nonpartisan and education-focused League of Women Voters and Catt turned to issues of world peace, the Woman’s Party continued to battle political and economic discrimination and fight for the Equal Rights Amendment, providing a legacy for activists seeking equal pay, challenging sexual harassment, and working to expand the number of women candidates and office holders.

In this study of how Tennessee ratified the Nineteenth Amendment, Weiss reminds readers of how difficult it was for women to achieve the vote, and it is a right which should never be taken for granted. She concludes, “The lobbying, public relations, and grassroots organizing techniques developed by the suffragettes, as well as their use of nonviolent protests and civil disobedience, stood as a model for midcentury African American civil rights campaigns, anti-Vietnam War protest groups, and gay rights activists. No doubt the future will bring more causes, more necessary repairs to American democracy, and more need for passionate civic activism” (335). Weiss’s well-written historical narrative of woman’s suffrage is both instructive and inspiring.