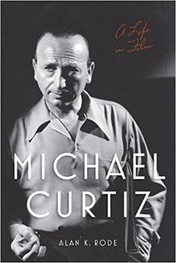 Michael Curtiz directed some of old Hollywood’s most acclaimed films, including Captain Blood (1935), Angels with Dirty Faces (1938), Casablanca (1942), Mildred Pierce (1945), and White Christmas (1954). Yet while the stars of Casablanca such as Humphrey Bogart and Ingrid Bergman are well known, the director who won an Academy Award for the film remains a rather obscure figure. Critics celebrate filmmakers such as Alfred Hitchcock and John Ford as auteurs whose work contains common visual and thematic elements, but the films of Curtiz are not usually subject to such praise.

Curtiz spent most of his career at Warner Brothers where he was an essential component in the studio filmmaking system. He directed the projects assigned to him by the studio, and Curtiz’s films encompassed numerous genres such as Westerns, musicals, horror, crime dramas, historical epics, melodramas, and even comedies—although comedy was the one genre with which the director seemed to struggle. Film scholars have, thus, tended to dismiss Curtiz as a technical and unimaginative filmmaker who worked quickly and efficiently but lacked an artistic vision. Alan K. Rode challenges this conventional wisdom regarding Curtiz in his massive biography that concentrates upon the director’s films.

Curtiz was born December 25, 1886 in Budapest to a Jewish Hungarian family of modest means. Drawn to the emerging art form of film, Curtiz found employment as a director in the fledgling Hungarian film industry. After a distinguished career in his native land, Curtiz fled the instability of post-World War I Hungary and pursued filmmaking in Austria. Epic films such as Sodom and Gomorrah (1922) gained international acclaim, and in 1926 Curtiz was extended a Hollywood contract by Warner Brothers. Although Curtiz’s European career occupies only nine of thirty-three chapters in the book, Rode’s research into the director’s silent films is quite impressive. Based upon his work in the Hungarian film archives, Rode provides a brief synopsis of Curtiz’s European filmography, arguing that the director demonstrated an eye for the moving image that went well beyond mere technical mastery of filmmaking.

In Hollywood, Curtiz’s vision often clashed with Warner Brothers executives who were primarily focused upon the profit margin for each film. Thus, much of Rode’s extensive research into the Warner archives concentrates upon correspondence between Curtiz and producer Hal Wallis urging the director to work more efficiently. Curtiz often ignored directives from Wallis as well as studio chief Jack Warner, including detailed crowd scenes and multiple takes which the executives considered costly and unnecessary. The director was able to get away with this defiance by delivering films that turned a profit at the box office. Despite insisting upon shots that Wallis and Warner considered too artsy and expensive, Curtiz adhered to the shooting schedules for his films by insisting that his performers and crew work long hours into the night, and he loathed wasting time by breaking for lunch.

Curtiz’s work habits did not endear the director to those who were assigned to work with him. Concentrating upon the finished product, Curtiz often seemed oblivious to extras and was criticized for being unconcerned with their safety. His communication skills were somewhat limited by his struggles with the English language, but Rode concedes that Curtiz had a short temper that often erupted on the set. Although Curtiz helped to launch the careers of Errol Flynn and Olivia de Havilland in films such as The Adventures of Robin Hood (1938), neither of the stars cared for the director. James Cagney appreciated Curtiz’s talent in eliciting an excellent performance from the actor in Yankee Doodle Dandy (1942), but he detested the way Curtiz often bullied film crews and young performers.

Rode portrays Curtiz as obsessed with filmmaking, and he often exhibited little concern or empathy for others. He was a workaholic who began production on another film as soon as he finished an assignment, and he seemed to take little pleasure in family life. His first marriage to a Hungarian actress ended in divorce, and he paid little attention to the children he fathered in Europe. After arriving in Hollywood, he married screenwriter Bess Meredyth, but the director engaged in numerous affairs throughout the marriage. The couple stayed together apparently for social and financial reasons with his wife offering uncredited suggestions to Curtiz’s film scripts. Rode makes it clear that the emphasis in his book is upon the director’s films rather than his personal life. Thus, he does not chronicle what was evidently a rather active sex life for Curtiz. The casual way Curtiz took advantage of young women in the film industry from the 1930s into the 1950s once again documents that the contemporary focus upon sexual harassment in Hollywood is hardly anything new. Sexual exploitation in the film industry is a problem with deep roots going back to the studio system. Rode describes but does not really condemn Curtiz’s behavior, seeming to conclude that the director was a product of his times and that the quality of his film work outweighs personal failures.

Rode also observes that Curtiz was essentially apolitical, but he was unable to totally escape the shadow of the Hollywood blacklist. After the Second World War, he was criticized for directing Mission to Moscow (1943) based upon the memoir by former ambassador to the Soviet Union, Joseph Davies. Seeking to generate support for America’s Soviet ally, Davies and the film downplay the totalitarianism of Stalin and the Soviet regime. Jack Warner, however, took most of the heat over the film for Curtiz had fled a post-World War I communist uprising in Hungary and was known for directing such patriotic fare as This Is the Army (1943). Rode writes, “Curtiz believed that the political class was a species to be avoided. Keeping quiet about his specific political leanings—if he had any—was an inconsequential sacrifice to make to safeguard his freedom to make movies” (451). Accordingly, Curtiz was able to escape the blacklist or naming of names to which many of his collaborators were exposed.

Post war challenges to the film industry extended beyond the Red Scare as television, suburbia, and other diversions eroded Hollywood’s influence on the culture. As the power of the studios waned, Curtiz attempted to form his own production company under the umbrella of Warner Brothers. Curtiz’s production company failed, and Rode documents that the studio took financial advantage of their former star director. After twenty-six years and eighty-six pictures, Curtiz left Warner Brothers in 1954 for Paramount. Although he enjoyed some success with Paramount, his career was clearly in decline. His last film was The Comancheros (1962), but due to failing health, star John Wayne had to finish production of the picture. On April 10, 1962, Curtiz succumbed to cancer at the age of seventy-five. His funeral was sparsely attended, and Curtiz expired with few friends.

In focusing upon Curtiz’s cinematic legacy, Rode concludes that filmmaking was paramount to Curtiz and took precedence over relationships. Despite personal failings, Rode argues that Curtiz should be remembered for his body of work and acknowledged as one of cinema’s great directors and not simply be dismissed as a product of the Hollywood studio factory system. Just as Bogart and Bergman always had Paris, we’ll always have Casablanca thanks to Michael Curtiz.