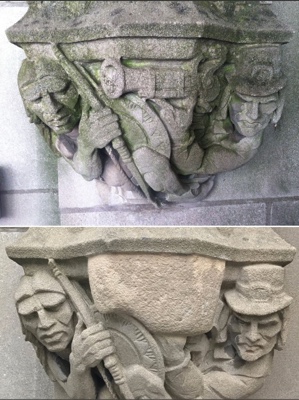 Yale’s determination to take a giant jar of Wite-Out to history has reached a new level of fatuousness.

This week the Yale Alumni Magazine reported that a stone carving of an Indian and a Puritan over an entrance to Sterling Memorial Library had been bowdlerized, with the weapon the latter was holding covered up. A head librarian, Susan Gibbons, said that she and the university’s Committee on Art in Public Spaces found that the carving’s “presence at a major entrance to Sterling was not appropriate.” Yale ordered the musket of the Puritan to be covered up with a layer of stone that Gibbons said “can be removed in the future without damaging the original carving,” the magazine reported.

It’s instructive that even as Yale’s administration rampages through history with a censor’s eye and a vandal’s paint pot, someone like Gibbons can tacitly acknowledge that the hysteria might die down in some future generation and that we should therefore make some of the cover-ups reversible. At the same time, though, it’s impossible not to rue the irony of a period when librarians take on the duties of literally covering up the past. Perhaps the definition of librarian will gradually morph over the coming decades to “one who protects us from the historical record.”