We Should Keep a Close Eye on Business, too

Nate Holdren is a U.S. legal historian who teaches in the Program in Law, Politics, and Society at Drake University. 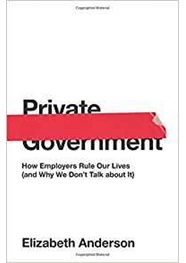 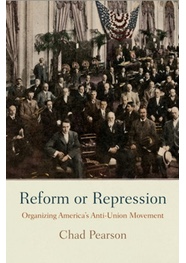 – Elizabeth Anderson’s Private Government: How Employers Rule Our Lives (and Why We Don’t Talk about It)

Imagine a senator at a town hall telling a constituent “sit down and shut up.” Imagine that person refusing, and the politician retaliating by getting that person’s health insurance cut off. It would be scandalous. Yet it’s far less scandalous, even normal, when an employer does this to an employee. Elizabeth Anderson’s Private Government: How Employers Rule Our Lives (and Why We Don’t Talk about It) is all about this power that employers have over employees. Anderson’s short book begins with a brief historical sketch of pre-19th century pro-market egalitarian ideology which held that market relationships would free people from older forms of subordination. She then argues that the predictions those market egalitarians made did not come true. In fact, with the industrial revolution society went in exactly the opposite direction: less equality and more employer power. Despite these changes, the myth of the market as a place of freedom persisted, completely out of touch with the realities of employment. This is why so-called libertarians generally seem not to be bothered by employer power. They understand government too narrowly as state government, and have an overly rosy view of the economy as a place of freedom.

Private Government’s over all point is that employers govern employees’ lives and that we lack a well-developed public conversation about this fact. Employers exercise what Anderson calls private government, meaning that employers can generally exercise power unaccountably and arbitrarily. This is unjust in its effects due to harms like low wages, bad conditions, sexual harassment and other forms of discrimination. Employer power is not just a problem due to effects, though, but also the fact itself of private government. Someone having this kind of power over someone else is wrong regardless of the immediate effects. Anderson repeatedly makes this point by comparison to totalitarian dictatorships, noting that a dictatorial state is still dictatorial even if it enacts some beneficial or popular policies. A dictatorship that allowed people to emigrate to other dictatorships would be no less dictatorial. Even though we can legally quit a specific job, we are compelled to have another job, leaving employees still under the governing power of employers.

Anderson concludes that employers’ authority should be mitigated by making employers accountable to employees and setting greater standards to reduce employer arbitrariness. Specifically, she calls for more employee rights and more voice at work, in the form of unionization and perhaps in the form of European-style works-councils (more often known in US history as company unions). Her suggestions are very brief and schematic, with no discussion of what it would take to actually implement them, but they remain thought provoking. The final part of the book includes four critical responses, ranging from sympathetic to hostile, followed by a reply from Anderson. That kind of debate is stimulating and will help readers think through the book. Her reply to economist Tyler Cowen (Cowen’s response is titled “Work Isn’t So Bad After All”) is especially lively and deservedly pointed.

Many of Anderson’s core ideas will feel familiar to readers who know about labor and working class history, or about the anti-work sentiments in many popular songs and movies, or who have been subjected to particularly onerous forms of employer power. Private Government is certainly informative about pre-19th century ideas of equality and economy and provides some awful examples of employer abusiveness (one that stands out is an employee fired because the boss’s friend raped the employee’s daughter). Above all, however, the real strength of the book is less that it gives a brand new picture of employer power and more that it gives a clear, powerful argument for ideas that many people will have already had in only inchoate form.

Anderson’s book pairs very well with a recent work of labor history, Chad Pearson’s Reform or Repression: Organizing America's Anti-Union Movement. Pearson’s book focuses on the early 20th century but it sounds a lot like the present: organized employers effectively fight the labor movement in a way that maintains and deepens differences in social power. They do so while speaking a lot like the pro-market egalitarians Anderson describes, depicting the economy as a place of freedom and positive American values while depicting unions as selfish special interest groups. Reform or Repression mostly focuses on heavy industry – manufacturing and especially the metal trades – because owners in those industries led the charge to organize employers and stop unions. Employers in some other industries do appear here, though, and the book captures a sensibility and a political movement that included most employers in the United States.

As the book describes, workers in the late 19th and early 20th centuries mobilized and struck for higher pay, better conditions, and more collective control over their lives at work. To use Anderson’s terms, they sought to have a greater voice and to limit employers’ power of private government. In response, employers followed employees’ lead. Workers challenged employer power by becoming a conscious, collective, disciplined political entity and some far-seeing employers realized that employers needed to do the same in response. As employers fought back against the labor movement, their goals evolved from attempts to negotiate effectively to attempts to break the central plank of the labor movement at the time – the closed shop, where only union members could be hired. Against the closed shop, employer associations posed the open shop, where the employer could hire whomever they wanted.

Much of Pearson’s book focus on specific advocates of the open-shop in Cleveland, Ohio; Buffalo, New York; Worcester, Massachusetts; and across the south. These city and region-specific accounts of how employers waged their war on the unions give biographical accounts of some of the key personnel involved in the open shop movement. The characters make for compelling reading, and illuminate the day-to-day workings of the open shop movement. Pearson tells us about John Penton, a leader of a metal-workers union who lost some intra-union battles, became embittered, and came to pedal his organizing knowhow to employers. Pearson minces no words, (rightly) calling Penton a class traitor. The example of Penton also demonstrates that employers were initially reactive to workers’ initiative – the bosses needed to hire a union organizer to get themselves organized. We also hear about Jay Dawley, a union busting lawyer who was also a class traitor, but in the other direction, becoming late in a life an opponent of the open shop movement and an advocate of workers’ rights. As Pearson points out, these two men underscore the role of non-employers in the employer movement. Another fascinating character is N.F. Thompson, a real estate broker, open shop advocate, booster for the South, former confederate soldier, and unapologetic former Klansman. One thing we get from Reform or Repression is that the open shop movement was not an abstract matter of labor and capital, but was composed of flesh and blood people who organized in real-time in specific places, actual people in a social struggle thinking out how to fight and win. This is the kind of story that only someone who is both a labor historian and a business historian could write, taking the understanding of organizing and class conflict that at least some labor historians have and bringing that to bear on how employers organized.

Pearson returns repeatedly to the rhetoric of the open shoppers. They spoke in terms like the common good, the public interest, ordinary or common people, the right to work, and free men, meaning men who were free from unions and the supposed coercion unions exerted over workers. The name “open shop” itself was a rhetorical ploy - who wouldn’t like openness? We see an echo of this today as legislators call policies designed to reduce unionization by the name “right to work.” Then as now employers often framed their actions as a matter of freedom, and claimed they were standing up for employees who wanted to be free individuals and not be forced into joining unions. This rhetoric was in part just public relations, but Pearson suggests at least some of the time that employers sincerely meant it. The open shoppers didn’t see themselves as despots or reactionaries. Many of them where philanthropists and advocates of social reform like ending child labor, and they had the backing of reforming luminaries like President Theodore Roosevelt and lawyer and eventual Supreme Court Justice Louis Brandeis.

In the book’s conclusion Pearson reflects on what it all means, and on what “the common good” is. He suggests that the employer movement wasn’t really in favor of the common good. I agree, in that I share what I think is Pearson’s notion of the common good. I would make a small criticism here, though, in that the way the point is made could lead some readers to think that employers were cynical or lying in their rhetoric. That’s possible. Other parts of Pearson’s book argue, though, that some employers really did put forward a sincere vision of the common good. It was just an oppressive and exploitive vision of the common good. Early 20th century employers, like the Republican Party and most (or perhaps all) Democrats today, put forward a vision of a well-ordered hierarchical society where workers are free to take whatever the labor market offers and not free to do much else. People are certainly not really free to try to change the labor market, let alone to challenge property relations or reject their status as commoditized labor power.

Anderson’s and Pearson’s books compliment each other well. Pearson provides lots of detail about how actual employers understood themselves and their actions as they sought to preserve their ability to exercise private government over employees, against workers’ attempts to limit that power through unionization. Anderson’s book makes clearer the specific principles of that private government and why it is wrong.

When paired together these two books are especially relevant to the present. We are currently seeing, in the form of both the Fight For Fifteen and calls for universal basic income, efforts to address serious economic inequality in the present. Those efforts matter. Both efforts, however, focus on addressing inequality in income, rather than the underlying inequality in power between employers and employees. These efforts are also about providing individual workers with the power to make individual rights claims in relation to the government – a right to be paid a citizen’s income or a right to have the state compel an employer to pay at least fifteen dollars an hour. Both of those are quite different from labor unions and the legal system that governs labor law. Unions involve workers doings things together as a political group with ideas about the common good, and seek to address the underlying power imbalance built in to employment. Both of these elements of unionization, collectivity and democratizing economic power, are different from individual rights claims and both are increasingly rare in the 21st century. Taken together, these books can enrich a much-needed conversation about economic justice, both as a concept for criticizing the problems with our existing society and as a concept for describing the kind of society we actually want.