Review of William J. Mann’s The Wars of the Roosevelts: The Ruthless Rise of America's Greatest Political Family 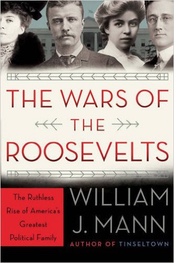 The Wars of the Roosevelts—what a clever title! (One has to wonder, however, how many American college graduates will understand the historical metaphor.) It would be easy to assume that this book—written by a biographer of Katherine Hepburn, Elizabeth Taylor and Barbra Streisand—relies on gossip and sensationalism to explore the inner lives of a renowned American political family. In fact, this is an absorbing, well-written and very important book for both scholars and general readers—solidly grounded in “letters, diaries, datebooks, telegrams, court records, FBI reports and contemporary newspaper accounts.” But, as author William J. Mann makes clear, the larger story of the Roosevelts has been “masterfully chronicled” many times. “Rather,” he insists, “my goal is to tell a story that has been embedded, entwined, in some ways hidden in plain sight,” within the history of politics and public policy. The rivalry of the Roosevelt dynasties, he acknowledges, is well-documented; “What’s been less acknowledged is the fact that the battles went far deeper and were more personal,” impacting the lives of “parents, children, siblings, and spouses” in what amounted to “a family at war.” Notwithstanding, the author is not quite as original as the HarperCollins publicists insist; most of the conflicts within and between the two branches of the Roosevelt family have been revealed before. The principal value of this book is that it provides a comprehensive synthesis of the many episodes that tie together this intense and emotional subplot to the larger historical narrative.

Half a century ago Joseph P. Lash blew the cover off the hidden history of Franklin and Eleanor Roosevelt by revealing the former’s affair and subsequent ties to Lucy Mercer Rutherfurd. Mann, by digging further into primary sources, has added a new dimension to the story of Theodore Roosevelt’s “ruthless” [Mann’s adjective] handling of the alcoholic ruin of his brother Elliott. Mann also doggedly traced the descendants of Elliott Roosevelt’s illegitimate child (with, right out of popular nineteenth century fiction, an immigrant housemaid) and puts a face on this once vanished individual—Elliott Roosevelt Mann (no relation to the author). Mann’s physical resemblance to his father is nothing short of uncanny and his descendants are now acknowledged by the Roosevelt family.

Mann’s original research and revelations concerning the life of Elliott’s out-of-wedlock son will likely attract most of the attention of readers and reviewers. TR, on receiving this alarming news about Elliot’s child, realized immediately that the younger brother he had competed with since childhood (in a relationship strikingly similar to that of Joseph P. Kennedy, Jr. and his younger brother John) might threaten his political future. With the cooperation of their sister Anna (known as “Bye” or “Bamie”), Theodore was determined to “take charge” of Elliott’s morally corrupt behavior, especially his alcoholism.

In fact, the intervention of TR and his older sister is hardly remarkable since their parents had both died prematurely in their forties and the two oldest siblings quite naturally saw themselves as acting for the family in loco parentis. It hardly seems surprising that TR would try to control this family crisis, in part, because a scandal that exposed his family’s violation of accepted social and moral norms would damage his political ambitions.

But, something else was at work here. Nineteenth century literature—fictional, religious, and medical— is filled with foreboding over the cultural impact of alcoholism. In fact, physician Benjamin Rush documented the degenerative results of alcoholism as early as 1784. Alarm over the social implications of the uncontrollable consumption of alcohol was of course central to the temperance movements that gained momentum after the Civil War and finally resulted in national prohibition from 1919 to 1933. The most alarming warnings against alcoholism were summed up in the theory of degenerationism, which claimed that the biological and environmental results of alcoholism would create irreversible physical, social, moral, and medical problems that would grow in each succeeding generation and lead inevitably to the extinction of the family and the collapse of social order. Degenerationism was rooted in the pre-genetics belief that acquired character traits were inherited and offered a plausible “scientific” explanation for the poverty and social dislocation of the industrial revolution. In short, alcoholism was not merely a transitory individual vice, but rather a ticking time bomb menacing civilization itself.i

Mann explains that he views these events “through a new lens, corrected for class privilege and outmoded moral judgments” that enables the “emotions, attitudes, and motivations” of these historical figures to be “disclosed or deduced.” Nonetheless, historians and readers cannot fully comprehend TR’s self-described “hard heart about Elliott” without understanding that the threat of degenerationism literally demanded separating Elliott from his own legitimate children, wife, and extended family. Theodore’s harsh treatment of his brother exposes something deeper than “his inability to countenance different worldviews, such as the one his brother had held.” TR was convinced that alcoholic degeneration was physically and socially contagious and strong men of moral character had to do everything possible to control it regardless of personal considerations. Alcoholism would not be diagnosed as a genetic/neurobiological disease until well into the twentieth century.

Mann’s larger story of the relations between the Oyster Bay and the Hyde Park Roosevelts is often captivating, but hardly revelatory. He covers all the familiar territory: Eleanor’s desolate childhood and adolescence and later fear that her failure as a mother had led to the numerous marriages (16!) of their five children; Alice’s bitter sense of isolation as the only child of TR’s late first wife, growing up with the five children of his second marriage; the brutal competition between TR’s children to measure up to their larger-than-life father; the dysfunctional relationship between Eleanor, Franklin, and his mother Sarah Delano; and the political conflict symbolized by Eleanor campaigning against TR, Jr. when he ran for governor of New York in 1924 and TR’s widow, Edith, speaking for President Hoover against FDR in 1932.

TR’s family, especially Alice, “despised the way Franklin had claimed her father’s mantle.” FDR had indeed consciously tried to replicate TR’s path to the White House: serving in the New York State legislature, as Assistant Secretary of the Navy, as candidate for vice president, and as governor of New York. Of course, Franklin believed that he was bringing to fruition “Uncle Ted’s” unfinished 1912 progressive agenda. But, for Alice, substance and policy issues often took a back seat to personal jealousy: “Along comes Franklin,” she grumbled, “called by many in the family ‘Feather Duster,’ and hops into the presidency.” Her father had failed to win the 1912 GOP nomination for a third term after receiving far more votes than President Taft in the new state primaries, and it was particularly galling that Franklin, a man who could not walk, let alone hop, not only broke the two-term tradition but even won a fourth term!

But, the political narrative is not Mann’s strong point or main concern. He speculates that on some level “Alice must have known Franklin had a point. His political methods and flagrant power grabs might not have been Theodore’s, but his goals and his aims (and, critically, his views on the role of government) were not dissimilar.” In fact, TR was never reluctant to engage in ‘flagrant power grabs’: for example, engineering the “revolution” in Panama to clear the way for building the Canal and secretly arranging a round-robin letter from a group of progressive Republican governors urging him to run for president in 1912. Even the adoring Alice, overjoyed by her father’s decision to throw his hat into the ring, admitted privately that the letter enabling him to claim publicly that he was responding to “a call from the people” had been “somewhat ‘cooked.’” But, as TR biographer Patricia O’Toole concluded, he was a man of action rather than reflection and understood his own motives “no better than fish understand water.”ii

Mann begins the book with a poignant account of Eleanor’s soul-searching struggle in the final two years of her life to honestly and accurately revise her autobiography. Ironically, it is this once shy, insecure, lonely little girl who stands out as the unlikely heroine of this sometimes nasty tale—the one public and introspective Roosevelt who always tried to grow and learn from even the most devastating experiences.