Remembering Apartheid in South Africa with a Chill 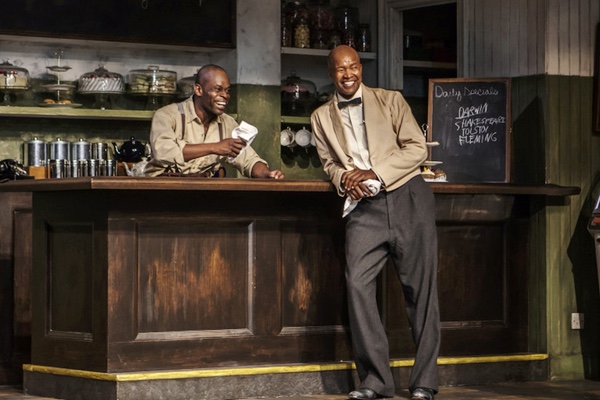 I first saw Athol Fugard’s blistering play Master Harold and the Boys in the early 1980s. Apartheid was in full force in South Africa, the world shunned the country and Nelson Mandela was still in prison. I saw it again at its revival opening in New York at the Signature Theater, W. 42d Street, and my feeling about the play was very different.

Now it is a sickening, shocking reminder of apartheid, the rule of the small white minority over the great majority of black residents of South Africa and, today, even more powerful because of all the years, and history, that have passed since it first opened.

The interesting thing about Master Harold is that the play in the 1980s was already historical because it depicted life in South Africa in the year 1950. Now it is history twice over and twice as pungent.

Not a whole lot happens in the play. Master Harold, a teenager nicknamed Hally, supervises two black men who work in the St. George’s Tea Garden, a restaurant owned by his parents (the restaurant set is magnificent). He has been friendly with the pair since he was a little boy and they interact easily, just like long-time friends, do, black or white.

The play opens as Willie, one of the two black waiters in the restaurant, is practicing his dance steps in anticipation of the big local dance championship coming up in two weeks. The older waiter, Sam, kids him about his dancing and gives him some veteran advice. Hally arrives and begins to interrogate them for information about their lives and their language for a school paper he is writing.

He gets a phone call from his mother, who is angry with his alcoholic father. Their conversation goes very badly. Hally is shocked and he takes out his frustration on the two waiters. The trouble is that the irate Hally goes too far – way too far.

What follows is one of the strongest, gut wrenching finales in theater history, when the two black waiters and the white kid comes face to face with each other over racism and say things they should not say, things that could ruin their friendship, ruin their lives. All of the anger of the black men, and of their country, bursts. It is an absolutely scalding scene and the members of the audience are very badly shaken.

Prior to the brutal finish, the play ambles along slowly with little hint of racism. The brilliance of Fugard is that he can build up an explosion without tipping his hand for quite a long time. His explosion is successful because of the deep and memorable characterizations he builds in his actors. They are admirable. They are understandable. They are also headed for a waterfall of racial agony.

Master Harold just rolls along. And then, wham.

Playwright Fugard himself directed the play and did a masterful job of keeping that ever advancing anger of the story in check, minute by minute, until the final confrontation. He gets volcanic performances from all three men. Noah Robbins is extremely believable as Hally, a typical young man who gets along just fine with blacks the racism living in him erupts.

Sahr Ngaujah is polished as Willie, the hopeful dance master determined to woo his girlfriend Hilda with his (well, not so) blinding dance steps. The real star of the play is Leon Addison Brown as Sam, who gets into the pulverizing conversation with Hally at the end of the play.

This is a play in which you learn much about the feelings of people in troubled South Africa in 1950, but it does not give you a lot of detail.

Apartheid ran strong right through the release of Nelson Mandela from prison in the early 1990s. As an example, in 1978 whites represented just 20% of the population and yet owned nearly 90% of the land, had 75% of the national income, had one doctor per 400 residents compared to a black average of one doctor per 44,000. Whites had an infant mortality rate of two per cent compared to a black rate of 40%. The average expenditure per white pupil in school was $696 compared to just $45 for a black child. Laws passed in 1948 permitted whites to control the national government. Interracial marriages were prohibited and white only jobs created. Racism was institutionalized. Fugard might have taken a few moments to explain that history. Those statistics would have added some power to his play.

Otherwise, this is a dramatic masterpiece, a splendid piece of theater that does what theater has always been meant to do – scorch your emotions.

You must see this play.