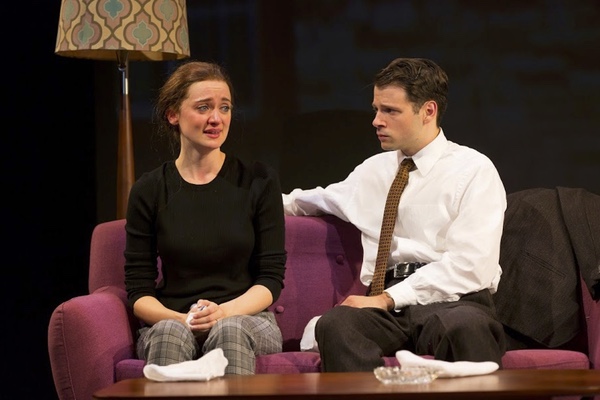 Americans a hundred years from now will remember the assassination of President John F. Kennedy and, along with it, his murderer, Lee Harvey Oswald. The man who killed the President with three shots from sixth floor of the Texas School Book Depository in Dallas, Texas, on November 22, 1963 will live on in memory with John Wilkes Booth and other twisted assassins. His sad, sick story never dies.

It gets new life in Mama’s Boy, a well-written, moving play that just opened at the George Street Playhouse, in New Brunswick, N.J., where it opened last week. It is the story of the relationship between the disturbed Oswald and his overbearing, obsessive, annoying and thoroughly distasteful mother, Marguerite, who pleads from the stage that if her son had just stayed home with his mom, remained a ‘mama’s boy,’ the assassination never would have taken place

He left home, though, and Kennedy died.

Mama’s Boy, written by Rob Urbinati, does not try to claim that Oswald’s oppressive mother caused him to kill JFK. What it tries to do is show that his overly loving mother was a part of his problem and that he had numerous problems that led him to kill Kennedy.

Everybody knows the story. The troubled Oswald lived in Russia for a while, adored Fidel Castro, visited political troublemakers in Mexico and had dealings with the FBI. While in Russia he fell in love with the attractive Marina and brought her to Texas, where they had two children.

Urbinati has loaded with play with the time worn conspiracy theories (pick one). He stages a jailhouse meeting between Oswald and his mom in which he hints to her that there is a complex story behind the shooting of Kennedy. Marguerite wails throughout the play that numerous government agencies may have killed Kennedy, using her vulnerable son as the shooter. It is hinted, again and again, that there was another gunman.

The play never absolves Oswald. He is continually portrayed as a demented man who, surely, shot Kennedy. He was a psychotic. He was deranged. He saw himself as a failure as a worker, father and husband. The play, through numerous photos, shows the horror of the entire nation over the death of the young President.

What this play does, and very successfully, is to show what a failure Oswald’s mother was to him and his two brothers, who shunned her. If she was a good mom could she have prevented her son from assassinating the President? Of course not. The mom in the play serves as the anchor of all the troubles Oswald had, all shown vividly. He physically abuses his wife and at one point slaps her. He goes on a tirade and trashes their apartment. He leaves home and lives in a small room. He rambles about his involvement with the FBI, the CIA, the State Department and the Russians.

His family was badly shaken by what he did. His older brother Robert, especially, was sickened and tries to do what he can to help the family keep its wits. His loving wife, Marina, who knew he had troubles, but not big troubles, comes off well. They were all in the backdrop of one of history’s most important historical events, footnotes to it. The play tells the story of that footnote, one that most people know little about, and how badly all in his family were mangled by Lee.

Director David Saint wisely lets Urbinati’s story unfold and does not try to make it yet another of the hundreds of books, movies and documentaries trying to turn the tale into a wide screen four hour melodrama. The director keeps it simple. He does not try to do a psychological evaluation of Oswald, but tries to intersect the assassin with his haranguing mom.

At the George Street Theater, director David Saint gets powerful performances from a strong ensemble cast. The star of the show is Betsy Aidem as the shrieking, disoriented mother. Michael Goldsmith is wonderful as the psychotic Lee Harvey Oswald, and looks a little like him, who is itching to do something bad from the moment he steps on to the stage with that famed scowl on his face. Miles G. Jackson is the shocked brother Robert and talented Laurel Casillo is wife Marina, on whom the brunt of the public horror fell after the assassination. Boyd Gaines is the interviewer.

There is a treasure chest of history in the play. It tells the story of the assassination and the murder of Oswald by Jack Ruby in great detail, but scenic designer Michael Anania also brilliantly uses a full stage size movie screen to show hundreds of black and white photos of newspaper front pages reporting the murder. They run for the entire fifteen minutes of the intermission (the cover of the program has a shocking photo of a little boy with a gun superimposed over the famous photo of Jackie Kennedy leaning over the trunk of her limo seconds after her husband is hit). The George Street Theater’s program has a long timeline that covers the lives of both JFK and Oswald and the theater lobby has an enormous collage of Oswald’s letters to his mother.

In the final scene of the play, Oswald’s mother, always so protective of him, gives a speech defending her son to a theater audience in New Brunswick of average Americans. At the end of it, looking out over the crowd, she says that Lee Harvey Oswald should be buried in Arlington National Cemetery.

The audience, every single person, gasped in horror.