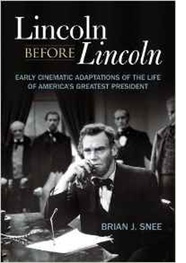 Every four years during the Presidential election cycle, Republicans proudly tout themselves the party of Lincoln. In 2016, however, this familiar theme seems to be largely ignored as the Republican Party, founded on principles of free labor and opposition to slavery expansion, is led by a candidate who appears to have little interest in history and the principles of inclusion once embraced by his party. As Brian J. Snee suggests, however, there is considerable interest among the American people in Abraham Lincoln, a fascination which is often expressed in the cinema where many Americans learn their history lessons. This popular interest in Lincoln was most evident in the 2012 film Lincoln directed by the legendary Steven Spielberg and which enjoyed both commercial and critical success with Daniel-Day Lewis earning a Best Actor Academy Award for his portrayal of the sixteenth President. While Spielberg’s film has received considerable attention, Snee focuses upon the major film and television productions on Lincoln before Spielberg’s movie. Although the image of Lincoln is addressed in numerous productions, Snee’s decision to concentrate upon The Birth of a Nation (1915), Abraham Lincoln (1930), Young Mr. Lincoln (1939), Abe Lincoln in Illinois (194), Sandberg’s Lincoln (1974-1976), and Gore Vidal’s Lincoln (1988) seems warranted. In addition, his thesis that these earlier films portrayed Lincoln primarily as a champion of the Union rather than as the great emancipator, a perception altered by Spielberg’s emphasis upon the slavery issue, appears well grounded in a close reading of the film texts. Nevertheless, Snee is a professor of communication and media at Manhattanville College rather than a historian. He provides readers with insights into critical film and communications theory that are accessible to the general reader, but one is often left wanting greater depth of analysis into the historical Lincoln.

Snee begins his analysis with the depiction of Lincoln contained in D. W. Griffith’s controversial epic The Birth of a Nation. As the filmmaker’s career was faltering during the Hollywood sound revolution, Griffith attempted to resurrect many of his ideas about Lincoln with Abraham Lincoln, in which Walter Huston portrayed the title role, but Griffith was unable to recapture the commercial success of his earlier work in the silent cinema. Snee concludes, however, that the Lincoln Memorial, completed in 1922, and Griffith’s Lincoln “encouraged an entire generation of Lincoln lovers to remember unity and not freedom as the greatest gift he had bequeathed to them” (60). Employing the analytical tool of hyperreality, Snee argues that Griffith’s portrayal of Lincoln in The Birth of a Nation as a martyr who gave his life to bring about national reconciliation following the Civil War has become the accepted image rather than imply the “reel” description. Snee, however, tends to underestimate the power of Griffith’s imagery when he writes, “His interpretation of the Civil War and Reconstruction has not been adopted and is uniformly regarded as biased and racist” (41). This statement might be true for academics today, but in the larger popular culture the myth of the Southern Lost Cause continues to hold sway as propagated by such Hollywood fare as The Birth of a Nation and Gone With the Wind (1939). Griffith’s interpretation of Reconstruction as the “rape” of the South by carpetbaggers, scalawags, and freedmen also reflected the historiography of leading historians such as William Dunning of Columbia University and progressive leaders such as Woodrow Wilson. These myths, despite the best efforts of revisionist scholars such as Eric Foner, may still be found in some textbooks employed in Southern school systems.

Lincoln is also acknowledged as the “great commoner” in such films as John Ford’s Young Mr. Lincoln. Snee observes that there is a degree of conflict with images of Lincoln as both simultaneously ordinary and extraordinary, but he argues that Ford resolves this contradiction by borrowing from Soviet filmmaker Sergei Eisenstein’s dialectical montage. It is difficult to conceive of Ford as being influenced by Marxism, but Snee maintains Lincoln’s (Henry Fonda) innate commonness juxtaposed with his emerging greatness produced the synthesis of the great commoner. On the other hand, Abe Lincoln in Illinois, based upon Robert Sherwood’s Pulitzer Prize-winning play and directed by John Cromwell with Raymond Massey in the title role, concentrates upon Lincoln’s years in Illinois before assuming the Presidency and presents Lincoln as embodying the principles established by the Revolutionary Founding Fathers. While depicting Lincoln as a symbol of American democracy, the divisive issue of slavery is largely ignored. Lincoln is also introduced as somewhat of an American innocent, and Snee fails to analyze whether Americans are really as innocent as they would like to be perceived. Also, America was on the verge of entering a global conflict with fascism when these films were made, and the historical/cultural context in which the pictures were produced is not fully developed and analyzed. In addition, Snee neglects to consider Frank Capra’s Mr. Smith Goes to Washington (1939); a film text that employs Lincoln as a symbol of American democracy although Capra’s America is a white community with few shades of color.

Snee concludes his study by examining two television depictions of Lincoln. Sandberg’s Lincoln (1974-1976) was a six-part miniseries adaptation of Carl Sandberg’s two-volume best-selling biography of the President. Featuring Hal Holbrook as Lincoln, the series includes six episodes featuring both the political and private Lincoln, but the series fails to follow a chronological narrative with the exception of the final installment that concentrates upon the President’s assassination. This time Snee pays more attention to historical context; insisting that Sandberg’s sentimentality provides a useful antidote to the political unrest of the 1960s and early 1970s with the Vietnam War and Watergate as the nation prepared to celebrate its bicentennial. In the final analysis, Sandberg’s Lincoln continues the primary concept of Lincoln as the great unifier; however, a television series such as Roots (1978) indicates that Americans were beginning to interrogate the historical reality of American slavery that cinematic images of Lincoln failed to confront. Gore Vidal’s Lincoln (1988) challenged some of cinema’s heroic assumptions as the iconoclastic novelist’s Lincoln (Sam Waterson) faces criticism from Southerners who perceive the President as a tyrant unwilling to compromise on the slavery issue, Northern politicians who believed the President violated civil rights and the Constitution in the prosecution of the war, and abolitionists impatient with the President’s reluctance to move more quickly against the institution of slavery. Thus, Snee concludes that Vidal was attempting to present a more complicated Lincoln than “the simplistic two-dimensionality of other representations” (135). Nevertheless, Gore Vidal’s Lincoln still presents emancipation as a goal influenced by a concern for union victories on the battlefield rather than the plight of enslaved people. Spielberg’s Lincoln depicts a man far more committed to the principle of equality, but Snee fails to address the complexity of Lincoln’s views on race and how these perceptions may have evolved over time; for opposing slavery expansion into the territories so they could remain open to white social mobility is considerably different than commitment to racial equality. Snee’s book would benefit from consideration of these issues as well as additional discussion of Spielberg’s Lincoln as the changing depiction of the President in this film is essential to the author’s thesis. Also, the observation on page nine that the Constitution rather than the Declaration of Independence states “all men are created equal” is a little disturbing. Nonetheless, Snee’s observations on the cinematic Lincoln offer some insights that will be of use to historians, and perhaps a re-examination of Lincoln’s image may foster further discussion as to what has happened to the party of Lincoln.