America’s Skid Row Will Never Be the Same 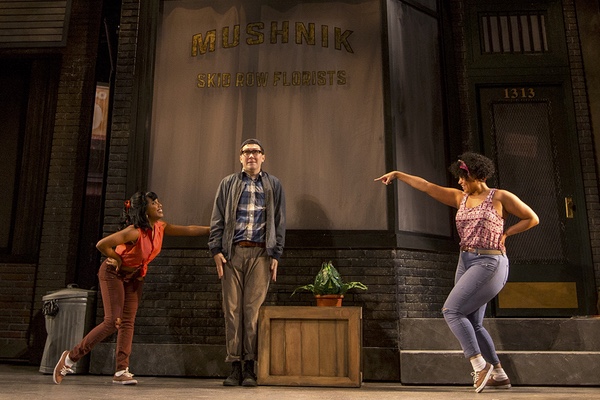 A Scene from “The Little Shop of Horrors” by the Berkshire Theatre Group. Photo Tyler H. First.

Who would ever applaud Skid Row?

In show biz, you can. In 1982, the musical Little Shop of Horrors, the story of a man-eating plant that caused business to boom in a flower shop on skid row in an unnamed city, opened on Broadway and was a huge hit. It became a movie in 1986. The Berkshire Theatre Festival has revived it and the rundown buildings and dirty streets of skid row, where the story takes place, shine once more.

The musical, now playing at the Colonial Theater in Pittsfield, Massachusetts, is a gem. Set designer Reid Thompson has created a dilapidated but enchanting flower shop, Mushnik’s, that sits on a marvelous revolving stage. One side of the stage is the interior of the shop and the other is its exterior set amid the rundown buildings and seedy allies of any decrepit skid row in America.

In the flower shop, Seymour Mushnik experiments with bright green plants and turns one, that he names Audrey II, into a gorgeous floral display that fills the window and through a bit of magic lures shoppers into the store, where business had been dreadful for a long time. Seymour’s dad and the woman who works there, Audrey, whom he has a crush on, are surprised and pleased. No one knows quite why the phenomenon is happening, though. Seymour does. The plant, played by the absolutely dazzling Taurean Everett as a man/woman (he lips syncs his songs, by the way. They are sung offstage by Byronha Parham) tells him that he needs to be fed people in order to live and grow. Seymour suddenly sees a chance to kill two birds with one stone (well, kill two plants with one stone). He murders Audrey’s boyfriend, his rival, and feeds him a la carte to the plant. That starts a chain of food festivals involving other people who serve as the plant’s brunch.

The result? Business booms. There is such a need by people to buy Mushnik’s flowers that even the Rose Bowl orders thousands of roses for its New Year’s Day Rose Bowl parade floats. Seymour becomes rich and famous. Is that what he wanted, though? Did he want fame through underhanded methods and murder? Did he want success on skid row that way?

The term skid row has a history. America’s “skid rows” began in the 1850s when it was applied to poverty stricken areas of New York’s Bowery. Oddly, the name came from a long row of wooden “skids” used by loggers to roll trees down mountainsides.

A skid row is generally a place where the homeless and criminals gather along with the marginalized people in society. It is full of bars, seedy stores, flop houses, cheap hotels and often home to newly arrived immigrants and those out of work. They can be large. In Los Angeles’s  skid row there were several thousand homeless people in 1930. In 2000, the growing skid row neighborhood was home to 17,000 people. In that same year, 28,000 lived in the skid row section of San Francisco. Cities have passed legislation to help the rundown neighborhoods, but in many cities they still exist.

By the 1950s, novelists, radio scriptwriters and screenwriters had used skid row settings in many of their works and the term “hit the skids” or “he ended up on skid row” became common phrases in the American language.

Little Shop of Horrors, on skid row, is a lot of fun. The zany and yet charming book by Howard Ashman is part suspense, part parody and part comedy (the play is based on a 1960 horror movie directed by Roger Corman). Ashman’s songs, with music by Alan Menken, help tell the story. There are even back-up singers, who pop up in alleys and apartment windows. The title song, Little Shop of Horrors, is a good one, and so is Skid Row. The others are not memorable, but help to carry along the show, as just about all show tunes do. Through it all, Audrey the always hungry plant hops and bops.

The director of the play, Ethan Heard, has done a fine job of re-creating one of the theater’s brightest and most memorable shows. He has worked hard on character development and succeeded. Each of the characters in the show, whether the worried father or ditzy girlfriend, is a masterpiece.

And then there is the absolutely delightful Everett as the plant Audrey II. He is a big, green adorable plant you would love to take care of yourself and even bring home to meet the family. He sings, he chatters, he jokes, he preens, and does it all as part of a storefront floral display. You don’t see all of him until the very end of the show, when he sashays across the stage, smile flashing and hips bumping, to a roar from the audience.