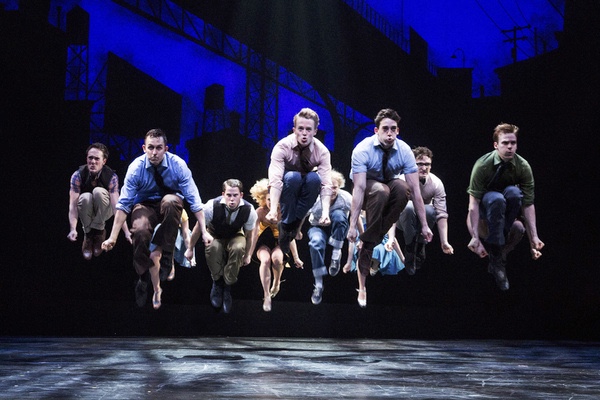 What is it about the 1957 play West Side Story, the story of urban street gangs in New York and their members, that has made it one of the most powerful musicals of all time? Is it the sneering, hard-ass gangbangers continually threatening everybody? The love at first sight romance between Tony and Maria? Its connections to Shakespeare’s Romeo and Juliet? A city’s battle to rid itself of crime?

And, of course, there is the beautiful music by Leonard Bernstein (lyrics by Stephen Sondheim) that makes it such a winner. Who can forget the classic songs such as “Somewhere,” “Tonight,” “I Feel Pretty,” “America” and “Maria”? There is the historical storyline of hopeful immigrants coming to America, this time from Puerto Rico in the 1950s, in an immigrant flow that has been going one since the Pilgrims. They all battle the language barrier and fight hard to make new lives for themselves here despite a lot of obstacles.

Most of all, though, it is the sizzling story of two rival gangs that plunge into a street war for domination on New York’s West Side in an era when an immigrant flood of Puerto Ricans changed the face of New York, just as all of the immigrants do today. In the middle of all that tension a good guy, Tony, falls head over heels in loved with newly arrived and very pretty Maria. Can their love survive in the turmoil on the streets?

The show has always been a winner. It won several Tonys and ran for two years on Broadway in the late 1950s and then became an iconic film in 1961 starring Russ Tamblyn, George Chakiris, Natalie Wood, Richard Beymer and Rita Moreno. It runs endlessly on television. It is a winner again at the Paper Mill Playhouse, in Millburn, N.J., where it opened last week (the Paper Mill just won a Tony Award as Best Regional Theater, by the way).

The Paper Mill production is powerful and moving at the same time that it is warm and lovely. It is a grand, historic musical about street life in New York in the 1950s and the birth of street gangs. It has truly wondrous choreography by Jerome Robbins that makes your eyes widen and your head spin. It has sensational acting performances by Matt Doyle as Tony and Belinda Allyn as Maria, who are also fabulous singers and stop the show with their rendition of “Tonight.”

In the Paper Mill production you can see that although he did not know it, book writer Arthur Laurents, along with Bernstein, Sondheim and Robbins, was not writing a play for his time, but for all time. West Side Story remains a legend just as Romeo and Juliet remains a legend. It is a story of city strife, crime and murder whose stars sing out loud for love, compassion and understanding.

The plot of the show is simple. American Tony and Puerto Rican Maria, two neighborhood young people, meet at a dance and fall in love. Maria’s brother, Bernardo, is the leader of a menacing street gang, the Sharks. Tony’s friend Riff is the leader of the rival street gang, the Jets. Maria urges Tony to stop a planned rumble between the two gangs but he fails and all hell breaks loose.

As you watch the play, you are just as concerned about the future of Tony and Maria as you are about the gangs, but something goes terribly wrong with the star crossed lovers, too.

West Side Story is a deep and enthralling history play. You learn much about the new street gangs of the 1950s, the foundation for the Bloods, Crips and other gangs that roam urban areas today like a cancer. You learn a lot about neighborhood stores, such as Doc’s, in the play, 1950s street life, law enforcement, the culture of young people and a lot about race and hatred because of racial conflicts. It is, and always will be, a masterpiece.

One would think, though, that after nearly sixty years the show would become ancient, out of date and sluggish. Just the opposite is true. Director Mark S. Hoebee has made it spring to life in Millburn. He has developed Tony and Maria as far deeper characters than just lovers, highlighted the personal animosities of the members of the two street gangs and added a lot of tension to the story. It is as alive, and riveting, today as it was sixty years ago.

The lives of street gangbangers today are, of course, far different than those seen in the musical. Street gangs today are an epidemic to be feared and not cheered. The gangs today are bigger, more numerous and very scary.

The rumble between the Sharks and Jets on stage is pretty mild stuff compared to contemporary gangbangers fighting on the streets of just about any city in America.

In the Paper Mill 2016 production of the 1950s story, the Jets and the Sharks had one extended fight and three guys were killed. Well, let’s look at modern day Chicago, where violence is a hobby. There, twelve people were shot (two dead) in a single 24 hour period in May. In that same month, 64 people were killed, most in street gang disputes. May was a murder season. The 64 men, women and children killed was the highest number in any one month in Chicago in 21 years.

Street gangs are far more brutal today then the Jets and Sharks of the ‘50s. Chicago police say it is routine for street gangs to murder the mothers, wives, brothers, sisters and children of murder victims in order to prevent them from giving any information to the police. The gangs in Chicago are far more numerous than in the West Side Story era, too. In a 2012 report, the Chicago Crime Commission said that the city was home to 600 gangs with 70,000 members. The numbers for other large cities are just as high. Fighting them on the streets of Chicago are the police, but there are only 11,700 patrolmen. The gangbangers outnumber the police by better than six to one.

The women gang members in Chicago are as bad as the men. One rather tough girl gangster in the Windy City was used as an assassin to wipe out members of other gangs. She was so proud of her work that she sent out 27,000 tweets threatening people during her three-year reign as a killer. Police charged her with at least one murder and three attempted murders, but there were reportedly many more. The police are not looking for her anymore, though; she was slain by members of a rival gang at the ripe old age of 17. And she was no soft and pretty Maria, or lovingly sassy like Maria’s friend Anita (who led the dancers in the song America).

In addition to Doyle and Allyn as Tony and Maria, director Hoebee gets mercurial acting from Mikey WInslow as Riff, German Alexander as Bernardo, Natalie Cortez as Anita, Dean Andre DeLuna as Chino, and Jay Russell as drug store proprietor Doc and William Ragsdale as the detective, Schrank. Plus, he gets fine performances from all of the Jets and Sharks and a large and skilled ensemble cast, all of whom dance up a storm to Bernstein’s electric music and Robbins’ spectacular choreography.

West Side Story is one of the finest musicals the Paper Mill has ever staged. It is a brilliant play that reminds us all how marvelous theater can be and how musicals such as this, in an engaging way, can tell us so much about a chapter of our history.

There is a line in the song “Somewhere” in which the cast sings that “there’s a place for us” in America in 1957. Today, there still is a place for immigrants, but people do sure argue loudly about what it is.