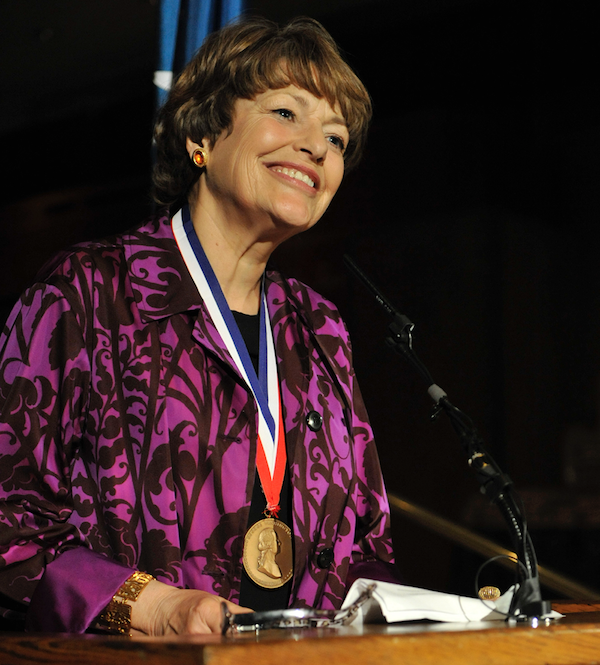 MOUNT VERNON, VA—A noted biographer whose work has focused on the women behind the great men of history has won the 2016 George Washington Prize. Flora Fraser was awarded the $50,000 prize for her book The Washingtons: George and Martha, “Join’d by Friendship, Crown’d by Love.”

The award, which is one of the nation’s largest literary prizes, honors the best new works on the nation’s founding era, especially those that engage a broad public audience. Conferred by Washington College, the Gilder Lehrman Institute of American History, and George Washington’s Mount Vernon, it was presented to Fraser on May 25 at a black-tie gala at the Mount Vernon estate.

“I feel greatly the honor that has been accorded The Washingtons,” Fraser said. “George and Martha’s marriage was an inspiring partnership to chart. The George Washington Prize, fruit of another partnership among three distinguished homes of learning, Washington College, the Gilder Lehrman Institute of American History, and George Washington’s Mount Vernon, is an accolade which I shall long treasure.”

Published in 2015 by Alfred A. Knopf, The Washingtons has drawn widespread praise from scholars and critics. While many books have chronicled George Washington’s life and public service, no other has so thoroughly examined the marriage bonds between him and his wife. Few primary sources exist on the life of Martha Washington, who destroyed all but one of the couple’s personal letters. But Fraser’s diligent research has resulted in a more comprehensive understanding of the nation’s first First Lady—and through her important story, a fuller sense of the nation’s first President. Fraser portrays a couple devoted to each other and steadfast in their loyalty: from their short courtship, through raising a family at Mount Vernon, to the long years of the Revolutionary War, to the first U.S. Presidency, and to retirement at their beloved Virginia plantation.

Fraser, who lives in London, is also the author of Beloved Emma: The Life of Emma, Lady Hamilton; The Unruly Queen: The Life of Queen Caroline; Princesses: The Six Daughters of George III; and Pauline Bonaparte: Venus of Empire. She chairs the Elizabeth Longford Prize for Historical Biography, which she established in 2003 in memory of her grandmother, a historian and author of many noted British biographies; her mother is the noted biographer Lady Antonia Fraser.

The Mount Vernon event also honored six finalists for the 2016 George Washington Prize: Mary Sarah Bilder for Madison’s Hand: Revising the Constitutional Convention (Harvard), Kathleen DuVal for Independence Lost: Lives on the Edge of the American Revolution (Random House), Robert Middlekauff for Washington’s Revolution: The Making of America’s First Leader (Knopf), Janet Polasky for Revolutions Without Borders: The Call to Liberty in the Atlantic World (Yale), David Preston for Braddock’s Defeat: The Battle of the Monongahela and the Road to Revolution (Oxford), and John Sedgwick for War of Two: Alexander Hamilton, Aaron Burr, and the Duel That Stunned the Nation (Penguin).

Established in 2005, the George Washington Prize has honored a dozen leading writers on the Revolutionary era including, last year, Lin-Manuel Miranda, creator of the hit musical Hamilton. Publishers in the United States and the United Kingdom submitted more than 60 books for the 2016 award.

Learn more about the George Washington Prize at washcoll.edu/gwbookprize.

About Washington College: Founded in 1782, Washington College in Chestertown, Md., was the first institution of higher learning established in the new republic. George Washington was a principal donor to the college and a member of its original board of trustees. He received an honorary degree from the college in June 1789. The College’s C.V. Starr Center for the Study of the American Experience, which administers the George Washington Prize, is an innovative center for the study of history, culture, and politics, and fosters excellence in the art of written history through fellowships, prizes, and student programs. www.washcoll.edu.

About the Gilder Lehrman Institute of American History: Founded in 1994 by Richard Gilder and Lewis E. Lehrman, the Gilder Lehrman Institute of American History is a nonprofit organization devoted to the improvement of history education. The Institute has developed an array of programs for schools, teachers, and students that now operate in all 50 states, including a website that features the more than 60,000 unique historical documents in the Gilder Lehrman Collection (www.gilderlehrman.org/collections). The Institute’s programs have been recognized by awards from the White House, the National Endowment for the Humanities, and the Organization of American Historians. Most recently, the Hamilton Education Program, made possible through a grant from The Rockefeller Foundation, is sending 20,000 eleventh grade students in New York City Title I schools to see performances of the musical Hamilton and is providing unique resources for their teachers to incorporate founding era history in the classroom. www.gilderlehrman.org.