Why Does the Democratic Party Have Superdelegates?

Kimberly St. Julian-Varnon is a Historian and History Teacher. She holds a MA from Harvard University in Russian and Eastern European Studies. 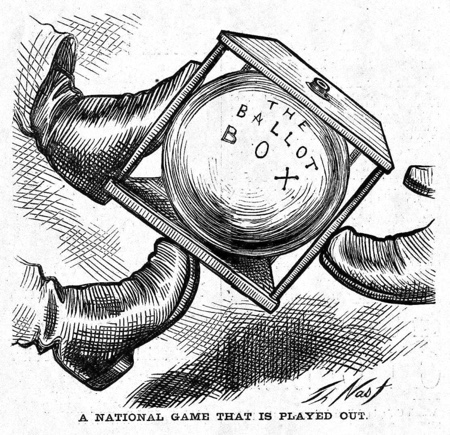 “The Ballot Box” by Thomas Nast

The rise of the superdelegates began in 1968 after a highly contentious, and on occasion violent, Democratic nomination process. Then Vice-President Hubert Humphrey won the Democratic Presidential nomination without participating in a single primary election. This outcome disturbed many Democrats including Senators Eugene McCarthy and Robert F. Kennedy. Both senators were anti-Vietnam, and believed that the Democratic nominee did not represent the majority of the Party nor their priorities, especially with regard to the Vietnam War. Republican nominee Richard Nixon defeated Humphrey, and the Democrats began a period of introspection as they began identifying what went wrong during the nomination process.

The McGovern-Fraser Commission was formed in 1968 to create a nomination process that would include more minority voices of the Democratic Party. The new process would also limit the influence of the party elites, who held the levers of power in 1968, which allowed Humphrey to become the nominee without a single primary vote. The result of the Commission’s work was a process that included open delegate selection, required a proportion of a state’s delegation to include racial minorities and women, and limited the number of delegates named by the State Democratic Committee to 10 percent of the total. Following the McGovern-Fraser Commission’s reforms, the number of states holding primaries to choose delegates increased each election cycle. Primaries allowed for party members, including party activists, to be more involved in the selection of delegates to the National Convention.

Despite Jimmy Carter’s success in the 1976 general election, the Democrats still grappled with trying to keep a balance between the more progressive party activists and the party’s elite. This push-and-pull culminated in the contested nomination of 1980, when Senator Edward Kennedy challenged the re-nomination of Jimmy Carter. Carter won that fight but went on to lose to Ronald Reagan in the general election. While Senator Kennedy was proud that the Democrats had a contested and more competitive convention than the Republicans, the issue remained that the process was creating Democratic nominees who were not competitive against the Republicans. Many of the Democratic Party’s elite, including members of Congress, felt they needed to have a bigger role in the nomination process in order to remain competitive.

The 1980 Hunt Commission set out to write the delegate rules for the 1984 nomination process after Carter’s re-election defeat. The new rules culminated in the creation of delegates who would be “unpledged,” meaning that they would be members of their respective state’s delegation to the National Convention regardless of which candidate they supported. In fact, these delegates did not have to declare a candidate preference until the national convention and could change their preference at the convention. These unpledged delegates are called “superdelegates” because their selection to the national convention is not tied to whom they support for President. Rather their selection depends on who they are and what they mean to the Democratic Party, unlike “pledged” delegates who cannot be chosen without declaring who they are supporting.

The driving idea behind the creation of this new group of delegates was to prevent highly contested nomination processes from producing a non-competitive candidate at the expense of the Party as happened in 1968 and 1972. As Commission Chairman Jim Hunt noted in a speech at the JFK School of Government in 1981: “We would then return a measure of decision-making power and discretion to the organized party and increase the incentive it has to offer elected officials for serious involvement.” Party elites would keep the long-term health and goals of the party in mind when casting their votes as unpledged delegates, preventing more embarrassing general election losses to the Republican Party.

According to Rules 8.A and 8.B (1984) of the Delegation Selection Rules, the House and Senate Democratic Caucus chose 60% of their total number members to be superdelegates. In 1988, the Fowler Fairness Commission of the DNC increased the amount to 80% of the combined members of the House and Senate. In 1996, the DNC’s Rules & By-Laws Committee changed the rule to include 100% of the combined members of the House and Senate as superdelegates. The number of Democrats in Congress and Democratic Governors varies by election year, which is a major reason the number fluctuates. In 1984, about 14% of the total delegates were superdelegates, in 2008, about 19% (796) were superdelegates and going into 2016, they represent about 15% (712) of the total number of delegates.

In a recent interview about superdelegates with CNN’s Jake Tapper, DNC Chairwoman Debbie Wasserman Schultz argued, “Unpledged delegates exist really to make sure that party leaders and elected officials don’t have to be in a position where they are running against grassroots activists.” Liberal and conservative critics, who question the role of superdelegates in the Presidential nomination process, have used her comments to support their arguments. Superdelegates drew importance and national attention during the 2008 Democratic Primaries. Senators Hillary Clinton and Barack Obama competed for the Democratic Nomination, and were close in the pledged delegate count by the 2008 National Convention.

Many party activists, in both the 2008 and in 2016 primary seasons, argue that the superdelegates are not democratic and lack legitimacy because the people do not elect them as they do pledged delegates. In regards to superdelegates and their role in the 2008 primary elections, former Representative and VP Candidate Geraldine Ferraro stated, “These superdelegates, we reasoned, are the party’s leaders. They are the ones who can bring together the most liberal members of our party with the most conservative and reach accommodation.” Contrary to Ferraro, then-Senator Obama remarked, "The American people are tired of politics that is dominated by the powerful, by the connected." However, he eventually gained enough of the superdelegate votes to secure the party’s presidential nomination.

Piroth, Scott. “Selecting Presidential Nominees: The Evolution of the Current System and Prospects for Reform”. Social Education 64, no. 5 (September 2000). http://www.uvm.edu/~dguber/POLS125/articles/piroth.htm (accessed May 01, 2016).

Kamarck, Elaine. “A History of ‘Super-Delegates’ in the Democratic Party.” https://www.hks.harvard.edu/news-events/news/news-archive/history-of-superdelegates (accessed April 30, 2016).