Review of Sean Wilentz’s "The Politicians and the Egalitarians"

David Sehat is associate professor of history at Georgia State University. His latest book, The Jefferson Rule: How the Founding Fathers Became Infallible and Our Politics Inflexible, will be published in paperback at the end of May. 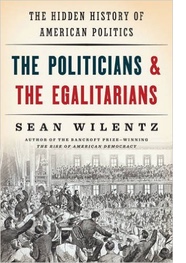 Sean Wilentz’s new book, The Politicians and the Egalitarians, is the latest installment of an ongoing historical and political project that has been quite controversial. Dating back to his 2006 work, The Rise of American Democracy: From Jefferson to Lincoln, Wilentz has led a revival of political history within the academy that uses the insights of social history and weds them to the study of elite politics. The Rise of American Democracy provided a master class in that approach and, in an indication of its success, it received the Bancroft Award and was a finalist for the Pulitzer Prize.

But Wilentz’s next book, The Age of Reagan, was not so universally honored. His shift from the antebellum years to the more recent past made explicit some of the implications of his approach. Wilentz suggested that understanding the past forty years of American politics required, first and foremost, coming to terms with the conservative turn inaugurated by the nation’s fortieth president. On the surface, the thesis is so indisputable that it is difficult to see the point of controversy. But since the book was published in 2008, just as the presidential election season was heating up, many observers on the left saw Age of Reagan as an extended defense of the policies of Bill Clinton, whose presidency was covered in the book, and by implication an endorsement of Hillary Clinton, who was then running for president for the first time. Wilentz’s assertion that Reagan had decisively shifted the political center was, to his critics, really a justification of the Clintons’ so-called Third Way and therefore served to excuse what leftists saw as the triangulated compromises of the Nineties.

In response, Wilentz spent several years probing the mindset of the left through a series of essays. Although his argument was, or should have been, a disagreement among friends, that fact was sometimes easy to miss given the heated responses that he has provoked. In 2009, for example, at the beginning of a boomlet in works on Abraham Lincoln timed to coincide with the sesquicentennial of the American Civil War, Wilentz wrote a 25,000 word piece for the New Republic reviewing some of the new literature. In contrast to the attempts to see Lincoln primarily as a moral visionary, as a writer, or as reluctant abolitionist who was pushed by activists to political action, Wilentz defended Lincoln primarily as a politician, which, he insisted, in no way diminished Lincoln as a man. It was only because of Lincoln’s skills as a politician—his ability to tactically compromise, to work within party structures, to build coalitions and to exploit his opponents’ weaknesses—that he was able to abolish slavery and to change the nation, Wilentz insisted.

Yet, again, contemporary politics intruded on the historical debate. In the sharp exchange that followed the essay, critics complained that it was Wilentz who was confusing historical analysis with polemics. Wilentz’s article “has little to do with recovering the historical Lincoln,” the historian John Stauffer replied. “Rather, it furthers his presentist defense of Clintonian politics.”

Wilentz has now reprinted part of his Lincoln essay, along with many others, in The Politicians and the Egalitarians. It is a work not likely to quiet debate, since it reveals Wilentz as a serious controversialist willing to critique, in his own words, “what is now the conventional historical wisdom on major topics.” Like his earlier writings, his historical vision is conjoined with a political lesson that many on the left will reject.

It begins with the assertion that party politics has organized political power in the United States since the establishment of the two-party system during the 1828 election. Since parties have been so dominant, Wilentz argues, those who have refused to work through them have not been terribly successful. Wilentz goes out of his way to show that those who chose not to work through the established party channels—John Brown with his turn toward violence, Theodore Roosevelt when he abandoned the Republicans and handed the 1912 election to Woodrow Wilson, Green Party activists who embraced Nader and, Wilentz argues, ensured the election of George W. Bush—actually damaged their political objectives and aided their opponents.

That does not mean that Wilentz believes that change happens only from the top down. One of the most important drivers of political change, he suggests, is the egalitarian tradition within American politics that originated in the revolutionary era. These egalitarians demanded new structures of power to create a more equal society. But in contrast to his critics on the left, Wilentz does not see the egalitarians as pushing an unwilling political establishment to embrace their ideals. “The great issues of our history have been settled not from friction between politicians and egalitarians ,” he writes, “but from the convergence of politics and protest.” It is in those moments that protesters and politicians come together—he points to Lincoln and the abolitionists during the Civil War and LBJ and the civil rights movement during the 1960s—that political change occurs.

In that way, Wilentz insists that his disagreement with others on the left is not about political philosophy or even about substantive political ideas. It is about style, about mindset, and about the discomfort with the grubby reality of politics by those seeking “a politics of purity.” He writes dismissively of those “beautiful dreamers” animated by “moral certitude” whose commitment to purity makes them unable to accept “a politics of the possible.” His admiration for political calculation and hardheaded political realism is sure to irritate his opponents.

But they would be wise to listen carefully to his argument, given the deeply informed historical vision that he brings to it. Wilentz includes beautiful readings of the Gettysburg Address and W.E. B. Du Bois’s Souls of Black Folk, tributes to Thomas Paine and Thomas Jefferson, and substantive engagements with Robert Caro, Edmund Morris, and Michael Kazin about their respective historical projects. The intellectual range on display is truly impressive. The result is a history of American politics, bearing an obvious contemporary resonance, that is absorbing, provoking, and, most importantly, right.