Ten Rounds of History: The All-American Boxing Film Is Back with Creed 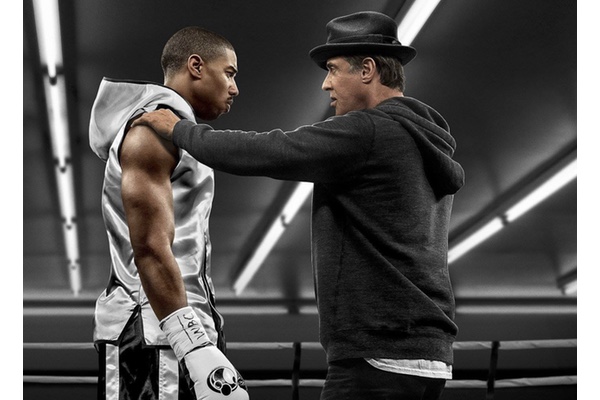 There is a moment towards the end of the smash new hit boxing film Creed when the old Rocky movie theme is played to signal the start of the key fight in the story. You want to just jump up and cheer (many, in fact, do exactly that, theater managers say). The sensational, critically hailed Creed has brought back the boxing film, an historical movie genre that has succeeded time and time again since Jack Johnson was heavyweight champ 100 years ago and people hailed him or jeered him when he appeared in grainy black and white silent films of his bouts.

Why have we loved boxing movies so much for over a hundred years?

Why are boxing films such monumental American drama, nice looks at history and such fun to watch (I can’t wait for Rocky XXXVII)?

1. The boxing hero is the ultimate macho man. He is the righteous tough guy who will knock out any opponent, and any type of evil, whether in a color or black and white movie.

2. Redemption: many heroes of boxing films led either poverty stricken or crime ridden lives before lacing on the gloves and stepping into the ring to find a new life.

3. Good vs. Evil. The boxing hero knocks out evil in the ring, and life, wherever he finds it

4. The ring as life: everything we combat in real life we see in the ring. If the champ can win, we can win, too.

7. The kid. Somewhere, there is always a lovable little kid who attaches himself to the boxer so that the boxer wins for himself and the kid, and kids everywhere.

8. Risking your life. Remember Max Baer threatening James Braddock in Cinderella Man? The boxer risks all every time he steps into the ring. He is not some football or hockey or baseball wimp with a helmet on.

9. The American dream: in whatever version of the American Dream you listen to, the good man who fights for right and stays out of trouble will ways prevail and realize the dream. If there is no white picket fence around his house at the end he can always rent one at Costco.

10. The mob. Not recently, but back in the 1950s and 1960s the mob was always part of the boxing story (for example: Terry Malloy in On the Waterfront). The mob actually did control much of boxing in that era, but on film the hero always knocks out the bad guys lurking in the shadows of the arena.

Creed follows all of those rules. Central character Adonis Johnson is actually the son of old boxing champ Apollo Creed of the first few Rocky films. The kid wants to be the champ and to do so hires Rocky Balboa, rotting away in Philadelphia, to train him. He fights for Rocky and Rocky, in his own way, fights for him. Gorgeous woman pops up early, of course (and a woman with a disability, too). The kid fights the very, very evil Pretty Rickie Conlan, quite naturally a foreigner (Brit) for the title and has no chance, no chance at all to win. It’s perfect and it is making a pile of money. People stand up and cheer in theaters. It is one of the best boxing films ever made, right up there with number one, Rocky.

We have always loved boxing films. They represent a big slice of American movie history. They reflect, too, real boxing history. Paul Newman in Somebody Up There Likes Me, about champ Rocky Graziano, showed that, as did Gentleman Jim, about Jim Corbett, Raging Bull (Jake LaMotta), Cinderella Man (James Braddock). The Hurricane (Rubin Carter), The Great White Hope (Jack Johnson) and Rocky Marciano. All of the Muhammad Ali movies reflected the sprawling drama of his life. The Joe Louis films were such as tribute to the Brown Bomber that Louis even played himself in one.

Boxing often creeped into great films as a sidelight, such as in the aforementioned On the Waterfront (the mob and the ring) and From Here to Eternity (boxer Pruitt).

There have been all kinds of boxing stories and, thrown together, provide something for everybody. Rocky, of course, was the comeback, ham and egger makes good, American dream story. On the Waterfront was the slugger standing up to the mob. Raging Bull was the story of a guy who succeeded even though he had few skills, just a savage nature and will to win. The Cinderella Man, that was not as big as it should have been, was the tale of a not so great boxer who went to basics and outlasted a bigger man to win the title to the cheers of all in the Depression, who saw James Braddock as representative of everybody up against it in America. The Great White Hope was about racism.

Are all male boxing films sexist? Not at all. One of the best boxing movies ever was Million Dollar Baby, that won an Oscar for its star, Hilary Swank (tough guy Clint Eastwood directed). It was the story of a woman who became one of the toughest fighters in the world and wound up a tragedy (it is so sad I can’t see it a second time).

If you look carefully, too, you see that many of the boxing films portrayed American history, too, such as the Depression in Cinderella Man, Vietnam in all the Ali movies, racism in the Jack Johnson films, World War II in From Here to Eternity, sexism in Million Dollar Baby. They provide a good window into cultural history and general history, too.

The boxing movie is getting a revival now, and not just because of Creed. Film Forum, in New York, recently released the classic Fat City. On television, you continually see the old John Garfield boxing hit Body and Soul . On some channel any hour of the day, you can watch one of the may Rocky films.

The one big problem with boxing movies is that Hollywood does not want to urge kids to be boxers because it is too dangerous. Every day, we read another story about the epidemic of concussions in football and drugs in baseball. The boxing films do not urge anyone to step into the ring. They simply showcase the rough, tough, bloody glory of the ring and let the viewer live vicariously through it.

Despite all of the blood, gore, and unending violence, the boxing film, over a century, is a movie genre that is as All-American as it gets.

Ladies and Gentlemen, the boxing movie – winner and still champion!