Jeremy Kuzmarov is J.P. Walker assistant professor of history at the University of Tulsa and author of Modernizing Repression: Police Training and Nation Building in the American Century (Massachusetts, 2012). He is currently working on a book on the revolution in military affairs and American permanent warfare state. 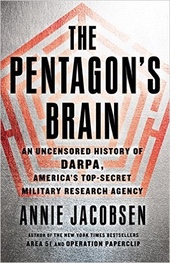 In his farewell address about the dangers of the military-industrial complex, Dwight Eisenhower warned that while science and research played a crucial role in national security, “we must be alert to the equal and opposite danger that public policy could itself become the captive of a scientific-technological elite.” Annie Jacobsen’s important new book, The Pentagon’s Brain, confirms the worst of Eisenhower’s fears, showing how the top secret Defense Advanced Research Projects Agency (DARPA) has commanded billions of taxpayer dollars to develop an array of Frankensteinian creations that would likely cause not only Eisenhower but also George Orwell to roll over in their graves.

Based on interviews with DARPA scientists and classified government documents and reports, Jacobsen’s book provides a chilling history of the agency, which was created by Congress in 1958 and has functioned ever since as the central research and development organization of the Pentagon. DARPA does not conduct scientific research but hires defense contractors, academics and other government organizations to do the work, and then facilitates the transition of the results for military use. Through effective public relations, the agency has been able to present itself as one that has led to innovations benefitting humanity such as the global positioning system (GPS) and the Internet. Its darker side has gone predominantly unreported over the years.

A rigorous researcher into the dark areas of American foreign policy, Jacobsen previously wrote Operation Paperclip on the recruitment by the Pentagon and CIA of Nazi scientists such as Wernher Von Braun, creator of the German V-2 rocket, who played a key role in the U.S. space program and was at one point considered for the top job at DARPA. During World War II, Von Braun was implicated in the deaths of thousands of slave laborers forced to build the V-2 rocket in an underground concentration camp called Nordhausen. Von Braun was part of the milieu of many of the top defense intellectuals and scientists associated with DARPA’s early history, including Edward Teller, father of the Hydrogen bomb, Herbert York, the head of Berkeley’s Livermore radiation laboratory, Harold Brown, the first physicist to hold the position of defense secretary under Jimmy Carter, and John Von Neumann, the “father of modern computers.” These men were all cold warriors who believed the way for America to maintain its dominant position in the world was through the forward march of science.

They and their successors spearheaded DARPA’s sponsorship of research that led to the so-called revolution in military affairs, whose central goal was the adoption of new technologies fit for the information age to secure U.S. global hegemony. The technologies included computerized control and command centers, laser-guided bombs, space-based satellites, night-vision devices and stealth fighter bombers invisible to radar. Psychological warfare techniques and behavior modification software designed to predict peasant behavior in Third World countries were also developed and adopted along with weather modifying technologies.

During the Vietnam War, DARPA-sponsored scientists developed an array of anti-guerrilla gadgets such as a hand-held rocket that fired 13 mm projectiles capable of penetrating the door of a three-quarter ton truck, boats which could float silently in only three inches of water, dogs possessing a special chemical scent undetectable by humans, light-weight rifles and bombs laden with a proximity fuse with a 75 millisecond delay so they would detonate below the jungle canopy but above ground. DARPA furthermore ran a toxicology branch at the army’s biological warfare laboratory at Ft. Detrick Maryland where it tested chemical defoliants such as the notorious Agent Orange, which was adopted in Vietnam to strip the leaves off trees to deny Vietcong fighters protective cover and to starve them into submission by poisoning a jungle root called manioc, their primary food crop.

At the behest of Defense Secretary Robert S. McNamara, elite Jason scientists working under DARPA contract later in the war developed electronic sensor devices ringed along the Ho Chi Minh Trail with land mines in an attempt to halt the northern supply line into the South. Made to look like vegetation, the ground sensors emitted signals via Lockheed radio relay aircraft and neighboring radar stations to giant IBM Model 65 computers at the Infiltration Surveillance Center in Nakhon Phanom air base in Northern Thailand, modeled after the Semi-Automatic Ground Environment (SAGE) centers for U.S. national air defense, where target data could be forwarded immediately to B-52 pilots. This was part of the billion dollar electronic battlefield, considered by Senator Barry Goldwater (R-AZ) “one of the greatest steps forward in warfare since gunpowder,” though which Senator William Proxmire (D-WI) warned could “lead to the wiping out of whole villages with air dropped explosive devices designed to kill anyone who ventures into their neighborhood.”

Many of the scientists involved with the electronic battlefield were hounded by protestors. In response to this and similar acts of dissent by protesters DARPA accelerated its “nonlethal” weapons program to develop ways to stop demonstrators through the use of painful but not deadly force. Much of the equipment was later used by urban SWAT teams in fighting the War on Drugs. Though Jimmy Carter said he wanted to base our foreign policy on human rights, his administration, with the support of Defense Secretary Harold Brown, nearly doubled DARPA’s budget in order to create fundamental “revolutionary advantages for the U.S. military.” DARPA was at the forefront in the development of computer battlefield simulators and Remotely Piloted Vehicles (RPVs) along with a billion dollar laser-based missile defense shield, which was implemented as part of President Ronald Reagan’s Strategic Defense Initiative (SDI). The first Gulf War provided a showcase for technologies like cruise and patriot missiles, laser-guided bombs and stealth bombers along with drones and the Joint Surveillance Target Attack Radar Systems (JSTARS), which involved aircraft equipped with a forty-foot-long canoe shaped radar dome capable of sending precise target information to army ground stations below. Techno-enthusiasts within the military establishment were humbled however by the subsequent fiasco in Somalia, where eighteen soldiers were killed and their bodies hacked up after their helicopter was shot down by Somali mobs armed with merely a few rifles and rocket propelled grenades. The incident prompted research into technologies capable of assisting in urban combat.

Since the beginning of the War on Terror, DARPA-scientists have developed multi-million dollar anti-Improvised Explosive Device and anti-sniper technologies along with hunter-killer robotic drones, which have yielded high collateral damage. As in past wars insurgents could continuously “offset U.S. technological superiority” with a countervailing method adopting “guile, subterfuge and terror mixed with patience and a willingness to die,” according to Robert Scales, a commander during the Battle for Hamburger Hill in Vietnam.

Rather than learning from history and pursuing a more peaceful approach to foreign policy, American strategic planners remain committed to advancing the next great super-weapon. The Unmanned Systems Integrated Roadmap FY 2011-2036 and 2013 to 2038 calls for the creation of an entire army of drones that includes underwater submarines and aircraft systems capable of flying 13,000 miles per hour (22 times faster than a commercial jet) and up into outer space along with an insect outfitted with micro-explosive bombs capable of killing moving targets with just grams of explosives. Plans include building small rhinoceros and cheetah robots that can run 28 miles per hour and jump over obstacles while carrying four hundred pounds of military equipment. DARPA is also currently investing heavily in artificial intelligence and machine learning research along with computer simulation models and nano-particles capable of creating super-powerful explosions over a small surface area. DARPA has even explored the possibility of launching a laser from space to shoot down ballistic missiles and hurl solid tungsten or titanium rods from satellites at terrestrial targets (“rods from God”) that could travel so fast (7,200 miles per hour) they could take out hardened bunkers as effectively as nuclear weapons without the radioactive fall-out.

The Pentagon’s Brain provides the most comprehensive history to date of DARPA, which reflects above all else a “horrendous failure of Western civilization in its use of science and technology,” to quote Albert Einstein. Social movements in the United States ought to try to rein in the scientific-technological elite, whose monstrous creations have killed and maimed thousands of people and threaten us all. DARPA’s brainpower should be used for good rather than evil to help us solve pressing social problems including climate change, rather than waging more futile high-tech wars that never can actually be won.