Why We Have Loved Gangster Movies for 100 Years 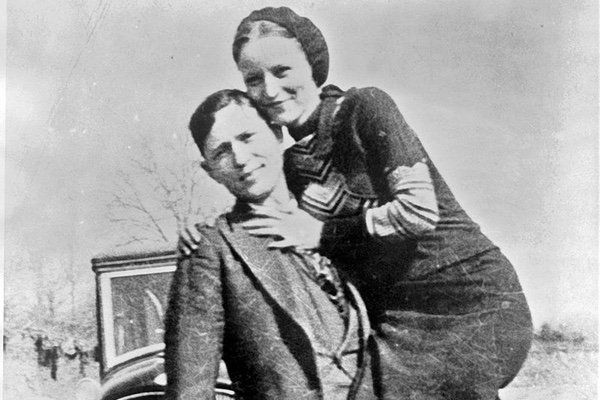 Bonnie Parker and Clyde Barrow, sometime between 1932 and 1934 - Wikipedia

Gangster James “Whitey” Bulger had been gone for sixteen years, vanished into the American landscape. The brutal New England mob boss, who murdered numerous people and controlled a powerful mafia family for more than twenty years, and at the same time betrayed his men as an FBI informer, had disappeared like a puff of smoke. Then, suddenly, in 2011, he was arrested in Santa Monica, California. A crime stopper television show aired a biography of him and the secretive, ordinary looking old man who lived in an apartment in Venice Beach with his longtime girlfriend not only surrendered without a classic movie shootout, but surrendered without even a whimper.

It is yet another American gangster movie. The mob movie has been a staple of American entertainment history since the silent movie era. It flourished after the arrival of sound with movies such as The Public Enemy and Little Caesar. The public’s love of the gangster boomed again in the late 1940s with film noir hoods like actor Richard Widmark, and crested in the 1970s with The Godfather movies. They were seen along with crime classics such as Bonnie & Clyde, Goodfellas, The Departed. Donnie Brasco and the HBO television series The Sopranos, starring Tony Soprano and his lovable New Jersey crew, understanding wife and troublesome kids.

The gangster movie is not only as American as apple pie; it is better than apple pie. You finish an apple pie; the mob movie never disappears.

Why do we love gangsters and crime cinema so much? They represent everything that America, and Americans, do not stand for. They focus on brutish, murderous thugs whose sole goal is accumulating power and money by using fear tactics. They will do anything to anybody to get ahead, regardless of how many laws they break or people they shoot.

We should hate gangsters, real or Hollywood, and yet we embrace them. Why?

The film and TV gangsters are a cultural phenomenon that dates back to the turn of the 20th century and the arrival in America of the Italian mafia, then called ‘The Black Hand.’ They split up into various “families” in New York and then in other American cities as organized crime, the mafia, the mob, the underworld – call it what you will – and succeeded not just in the streets, but in the box offices of theater and later on television stations.

The screen or television gangster is somebody many Americans wish they could be – tough, resilient, fearless – but, of course, we are not. The hoods live in a chaotic, violent world that Americans want to control themselves, but not really. We love to admire them, to talk about them, read about them and see them on the silver screen and wish we could be them – up to ‘the line,’ the line that, of course, we do not cross. We just sit back and live like them, machine guns and all – vicariously.

The Hollywood mobster is an historic character. He got his start in the early days of sound film because during the 1920s, thanks to endless media attention, he had already become a major figure on the American scene. Most of the early real life gangsters were immigrants who could not succeed in American because of persecution and discrimination against ethnic groups. So, nowhere else to go, they turned to crime. They had to turn to crime, shrugged Americans. Since all of us are, way back, immigrants from somewhere, we understood that.

The gangsters left us alone. They went about their business – robbery, murder, kidnapping, extortion – but did not bother the average citizen. They were successful, made a lot of money and lived in large homes. Nobody loves successful people like Americans. The mobsters were admired for their ability to rise above discrimination and succeed. By 1930, Americans saw them just like other people successful people– well-dressed men who drove flashy cars, hung out at posh night clubs, mingled with movie stars, dated beautiful women and lived the American dream. They achieved what we all wanted to achieve. They just did it in a different way.

What movie writers did was take the real gangster, sanitize him, glamorize him and put him on the big screen as a hero. He was the immigrant tough guy who blasted his way to the top. The judges, public officials and cops were the villains in all those 1930s gangster movies (did they all star James Cagney or did it just seem that way?). They were Robin Hoods with machine guns.

The movie gangster succeeded because real life gangsters of the era, such as Al Capone, Bonnie and Clyde and John Dillinger, had also become folk heroes, thanks to huge press coverage of their lives. The movies just took real life, put some make up on it, added music, printed posters and rolled the cameras.

In his wonderfully analytic book, Inventing the Public Enemy, David Ruth wrote of Capone that “In press conferences, interviews with reporters and a highly theatrical social life, Al Capone worked as hard as any movie star to create a favorable public image.... He was the subject of popular books, numerous pulp publications, movies and feature articles in newspapers and magazines ranging from Master Detective to Collier’s.”

The gangster movie was in a lull from the late ‘30s to the late 40’s and then from the early 1950s to the early 1970s. Then came Marlon Brando (“I’ll make him an offer he cannot refuse”), Al Pacino and Robert DeNiro in the Godfather movies. The public loved the Corleones and despised anybody trying to injure them, such as the FBI, the New York City Police Department and the Supreme Court.

The Corleones, and all screen gangsters, were good people. They never killed people out of personal hatred. It was all “just business.” They loved their wives, were good family men, raised kids, went to church and respected each other. They were men who acted like all men wanted to act. They just had a different type of job, that’s all – real different. They died just like we all died, except they died suddenly.

The Sopranos cemented the role of the beloved gangster in American entertainment. There were only two endings for Tony Soprano as the series was going to off the air – murder or prison. The public did not want that, though. In a New Jersey Star Ledger poll, over 80% of those queried begged the producer of The Sopranos to somehow let Tony live. The public loved Tony. He was everybody’s favorite uncle. He cared for his wife, loved his kids, helped his family, fought with his mother and Uncle, put up with his shrink and always tried to do what he could, with his working class, immigrant background, to get ahead in America. Tony Soprano did kill a lot of people but … oh, well.

So your son wants to be a doctor, an architect, a United States Senator? Your daughter wants to be an engineer, college professor, scientist?

Just remember one of the first lines in the mob movie Goodfellas. “As far back as I could remember, I always wanted to be a gangster. To me, being a gangster was better than being President of the United States.”