Why “Hamilton” Is the Right Musical for Our Time

Robert W. Snyder, associate professor of journalism and American Studies at Rutgers University--Newark, is the author of Crossing Broadway: Washington Heights and the Promise of New York City. 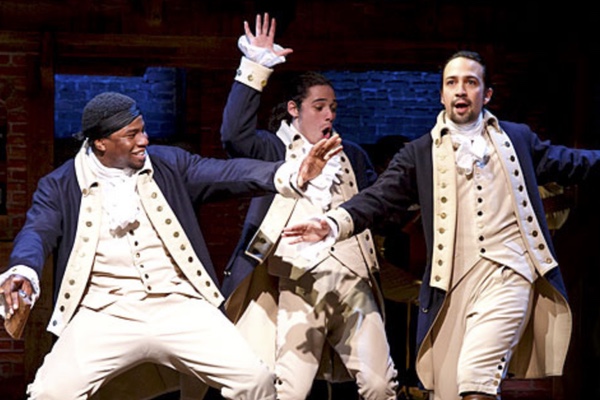 If Lin-Manuel Miranda’s career had ended with “In the Heights” — a chronicle of Latino life in upper Manhattan rendered in Spanglish, rap, hip-hop and salsa that won four Tony awards in 2008—he would still be acclaimed as the creator of a great musical. In “Hamilton,” working at the intersection of Broadway, hip-hop and history, he takes the popular culture strengths of “In the Heights” to new levels and new questions.

The key to Miranda’s work is his ability to ground his innovations in the best of the past. Raised in a household that venerated both salsa and Broadway musicals, he produces shows that draw on the best theatrical forms and concerns of earlier eras. “In the Heights” echoed the immigrant emphasis of Harrigan and Hart, the singable tunes of great mid-century Broadway shows like “On the Town,” and concerns with changing traditions that animated “Fiddler on the Roof.” “Hamilton,” in turn, contains references to “Pirates of Penzance” and “South Pacific.”

Miranda’s sympathetic interpretation of Alexander Hamilton takes him off the ten dollar bill and puts him back in the streets of New York. Like “In the Heights,” “Hamilton” is defined by a sense of place. The ropes, platforms and scaffolding of its stage set conjure the 18th century port of New York—a place in touch with the world, especially the Caribbean world of big money and enslaved labor that Hamilton was born into. The New York City that Hamilton immigrates to is at once global and local, a place buzzing with gossip and possibilities where “you can be a new man.”

The play is also, like its subject and its creator, an impressive high/low act. “Hamilton” asks and answers the rapped question, “How does a bastard, orphan, son of a whore/ And a Scotsman, dropped in the middle of a forgotten spot/In the Caribbean, by Providence impoverished, to squalor/ Grow up to be a hero and a scholar?”

Miranda was better born—the son of a psychologist and political consultant—but the defining journey of his early life was navigating between his uptown neighborhood of Inwood, with its Latino community, and the elite schools where he was educated—Hunter College High School and Wesleyan University. The journey left Miranda with an impressive ability to reconcile lessons from books and lessons from the streets.

“Hamilton,” like other great cultural productions from New York—the poetry of Walt Whitman or the paintings of the Ashcan Artists—is rich in allusions to the many lessons that a city can teach. At one point in the play, George Washington counsels Hamilton (who seeks glory on the battlefield) that “Dying is easy, living is harder.” The line echoes lessons imparted on the streets of Washington Heights, when drug shooting ravaged the neighborhood in the 1980s and 1990s.

In performance, the defining traits of “Hamilton” are its extensive use of rap and its strongly African American and Latino cast playing the “Founding Fathers.” Yet the sense of newness in the show comes not from its songs, but from its historical perspectives.

In playing the founders of the United States, the African American and Latino actors in “Hamilton” do not reject American history but claim it as their own, to be interpreted in light of their own experience.

In consequence, “Hamilton” never loses sight of the slavery that scarred the Caribbean, the thirteen colonies and the early United States of America. In this show, Thomas Jefferson’s hypocrisy on slavery is neither forgiven nor forgotten. The master of Monticello is depicted as something of a fop, blithely skating over the gaps between his ideals, the grubbiness of politics, and his own practice of human bondage.

The show’s skewering of Jefferson suggests how rising concerns with race and slavery have diminished the image of the author of the Declaration of Independence. Its admiring depiction of Hamilton’s opposition to slavery, and his recognition of the need for a strong federal government, is a valuable reminder of the limits of other Founders’ thinking. Its greatest emphasis is on Hamilton the ambitious outsider, the predecessor of every scrappy immigrant.

But it is worth recalling that earlier generations of Americans looked at the Jefferson-Hamilton rivalry and saw in Hamilton a representaive of great wealth who approached democracy with wariness. Hamilton was indeed an Anglophile Federalist whose admirable opposition to slavery was matched by contempt for the political capacities of ordinary people. The best government, he argued, was one that gave the rich and well-born few a check on the turbulent and unreliable many. For the great number of Americans who valued their revolution as the beginning of a country where regular folks did not have to bow to their “betters,” this was too much to stomach. Jefferson’s more democratic politics—at least among white men—swept the Federalists from office and, until recently, swept Hamilton from popular acclaim.

A better future for American politics requires a fusion of Jefferson’s ideals of “life, liberty and the pursuit of happiness” and Hamilton’s understanding of the value of strong government. As for a better future for the Broadway musical, it has already arrived in the form of “Hamilton.”