Review of Tim Weiner’s “One Man Against the World: The Tragedy of Richard Nixon” (Holt 2015) 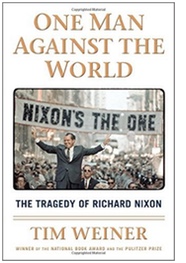 Related Link Mel Small's Review of One Man Against the World

Years ago, after Richard Nixon had resigned and gone into temporary exile, my boss introduced me to Sam Dash, the former Senate Watergate Committee’s chief counsel. I remember asking Dash if he thought we had heard the last of Nixon. “Never!” he answered. “He’ll always be around, with people attacking and defending him.”

First there were those devastatingly dark TV portraits, then the well-publicized David Frost interviews for which he received $600,000 according to Tim Weiner, plus an additional $2 million for his ghosted memoirs. Rick Cleveland’s well-received new play, “Five Presidents,” has our five living ex-Presidents gathering in Yorba Linda for his funeral. Gerald Ford arrives early at the Presidential Library and Museum and finds himself staring at a photo of Nixon. He then asks a Secret Service agent not to leave. “I’m not sure I want to be left alone with him,” says the accidental President who saved Nixon from time in Leavenworth.

Tim Weiner, whose superb book about the CIA, “Legacy of Ashes,” won a National Book Award, is now out with “One Man Against the World,” a credible, dramatic, original and devastating portrayal of Richard Nixon and his closest aides. Unlike previous Nixon books it is based on tens of thousands of recently released documents, among them the priceless Haldeman diaries, Nixon’s federal grand jury testimony, diaries, oral histories galore and the papers of eyewitnesses. They include those celebrated White House tapes, among them the notorious “eighteen-and-a-half-minute gap,” which Weiner speculates were intentionally deleted, because “only the president or a close aide” could have been involved.

Weiner’s critical approach is relentless, somewhat reminiscent of Seymour Hersh’s unforgiving portrait of Henry Kissinger in “The Price of Power.” He says Nixon had few friends—someone once joked that his best friend was his ever-present yellow legal pad. One problem with Weiner’s all-or-nothing approach is his failure to credit Nixon’s first term’s achievements, such as establishing the Environmental Protective Agency, signing Title IX, sending crucial military aid to Israel during the 1973 war, and ending the universally-despised draft.

Weiner, however, does allow that Nixon longed to be a man of peace, a notion perhaps inherited from his mother’s Quaker faith. During his campaign for the presidency in 1968 he took the high road, saying he wanted to end the war. Leading political commentators then began writing about the appearance of yet another New Nixon supplanting the Old tainted, red-baiting, duplicitous one. The New Nixon was so persuasive that it convinced Walter Lippman and Joseph Kraft to vote for him in 1968. On Election Night, the victorious Nixon announced that the “great objective of the Administration at the outset [is] to bring the American people together.” Indeed, his first inaugural address in 1969 sounded almost Lincolnian and more and more Americans, increasingly weary of the war, draft calls and casualty lists, preferred hoping that the tumultuous sixties were drawing to a close. But the trouble was that if Nixon thought of himself as a global magician capable of bringing “peace with honor” it could only be on his convoluted terms.

When he entered the White House the country was still bitterly separated by class, race, and Vietnam. He made no effort to heal the divides because he had never been a healer or unifier but was instead possessed by a desperate need to win at all costs. To achieve his unspecific “peace” plan there was no New Nixon. The old one, filled with bottomless resentment against the Washington elite, eastern liberals, the national media, especially Katherine Graham’s Washington Post, and his contempt for Blacks and Jews, could not let him rest.

Other than acting as a Vietnam War cheerleader, it was LBJ’s war until 1969, when it became Nixon’s war, which would eventually bring him to Watergate. In that same year, a prescient Jonathan Schell, who was never convinced there was a New Nixon, diagnosed the new administration as suffering from “rage, isolation, secretiveness, and a proclivity for repressive action,” which sounded an awful lot like the Old Nixon.

Nixon carefully chose his closest and most trusted aides and most remained devoted to him until the very end. H.R. Haldeman had been an advertising executive who, thankfully, kept a detailed diary which Weiner used extensively and profitably. John Erlichman was from the world of public relations. Henry Kissinger was Henry Kissinger, at times a Nixon flatterer but also a smart observer and brilliant diplomat who occasionally aroused Nixon’s ever-present suspicions. Quoting from Haldeman’s diary, Weiner says, “The consensus at Camp David was that Kissinger was on the edge of sanity.” Earlier, “Nixon even considered the wisdom of retaining Kissinger—whose psychological stability he questioned in solitary conversations with Haldeman and Haig—for the peace he had promised was nowhere at hand.”

The new documents show Kissinger urging on anti-Allende rightists in Chile and backing Nixon’s devastating mass bombings of Cambodia, Laos and North Vietnam. When, for example, Nixon wanted to track down leakers to the press, Weiner says Kissinger “implied he was only following orders” but then he has Nixon shouting on the tape, “Henry ordered the whole goddamn thing….He read every one of those tapes … he reveled in it, he groveled it, he wallowed in it.”

John Mitchell was the Wall Street municipal bonds specialist turned Attorney General who dearly loved his disturbed and alcoholic wife who had gone public about what John and the White House crew were up to. Mitchell, writes Weiner, was “disengaged, drinking, running the Justice Department, [and] dreading the campaign to come” which ultimately ruined him.

Secrecy, though, was not unique to Nixon’s administration. LBJ became conspiratorial the more Americans turned against the war. He wound up believing the antiwar movement was a communist plot and wanted leading dissidents prosecuted. When Nixon went after his domestic “enemies,” he promoted the so-called Huston Plan, which called for break-ins, illicit electronic spying, opening letters and parcels, and even rounding up antiwar activists. Weiner says Huston warned Nixon that many aspects of the plan were illegal “but Nixon believed that if a president did it, it was not illegal.” Nixon subsequently approved of the aborted scheme but the FBI’s Hoover did not, claiming the blame would fall on him. “I’m not going to accept the responsibility myself anymore even though I’ve done it for many years,” adding, “It is becoming more and more dangerous and we are apt to get caught.”

Spiro Agnew was another Nixonian dirty trickster waging verbal war against the antiwar movement. But the VP was also a cheap crook mooching bribes from people doing business with Maryland and Washington. Somehow he avoided a prison sentence.

Then there was John Dean, Nixon’s legal counsel. His conversation with Nixon on March 21, 1973, “remains”–writes Weiner—“the most remarkable tape Richard Nixon ever recorded." “We have a cancer within, close to the presidency” Dean tells him, then mentioning that the “Plumbers” were demanding lots of money for their silence. The ever-faithful Mitchell was dispatched by Nixon to solicit hush money.

Dean tells Nixon that his “cancer” problem arose “with an instruction to me from Bob Haldeman to see if we couldn’t set up a perfectly legitimate campaign intelligence operation over at the Re-Election Committee… I came up with Gordon Liddy…. I was aware of the fact that he had done some extremely sensitive things for the White House…going out into Ellsberg’s doctor’s office.” “0h yeah,” said Nixon, because Erlichman had told him about the burglary.

Dean continues: “Took Liddy over to meet Mitchell. Liddy laid out million dollar plan that was the most incredible thing I have ever laid my eyes on: all in codes, and involved black bag operations, kidnapping, providing prostitutes to weaken the opposition, bugging, mugging teams.”

Weiner describes staff members observing an increasingly agitated and anxious Nixon, bringing him to behavior even outlandish for him. One day, the NSC’s Brent Scowcroft phones Kissinger. A call had come from 10 Downing Street saying the British Prime Minister wanted to speak with Nixon about the Arab-Israeli 1973 war. “Can we tell them no?” asks Kissinger. “When I talked to the President he was loaded.”

By 1973, Nixon was sinking into despair and depression. As a result, writes Weiner, “Kissinger gained an imperial power over foreign policy and Alexander Haig behaved like the acting president of the U. S.” writes Weiner. “In the absence of a functioning President,” five men—Kissinger, Haig, Admiral Thomas Moorer of the Joint Chiefs of Staff,Haldeman and Erlichman were confronted by potentially serious difficulties with the Soviets and from the Yom Kippur War.

What is most striking was that a group of “unelected officials could raise a global military alert, mobilize the 82nd Airborne, and send nuclear bombers aloft in a midnight meeting without consulting Congress or as it became evident, the president.” Kissinger would later credit Nixon but Weiner says we now know that on that ominous night he was in the White House’s private quarters, sleeping off a drunk. And again, after the Saturday Night Massacre, Kissinger, Haig, Moorer, Defense Secretary James Schlesinger and the CIA’s William Colby gathered to try dealing with the Middle Eastern war and cool down the Soviets after their ships armed with nuclear weapons were spotted moving south from the Black Sea toward the Mediterranean. Helmut Sonnefeldt, Kissinger’s senior aide reported Nixon “was in his family quarters. There were rumors that he was drunk.” Weiner adds a correction: “They were not rumors.”

As the end drew closer, Weiner reveals that before Alexander Butterfield told Congress about the White House tapes, Nixon was still ready to battle his foes, vowing strike back at Sam Ervin and the Senate Watergate Committee. “I’m going to hit them and destroy them and they’ll be destroyed …absolutely destroyed” says the delusionary soon-to-be ex-President to Haig. Then phoning Kissinger from Camp David, he tells him, “We’ve been at this for four years, four-and-a-half-years…[I]t’s virtually the same enemies, isn’t it?” To which Kissinger replies, “The same enemies and now trying to do legally what they tried with riots earlier.”

But the tapes told another story. “Among these tapes,” concludes Weiner, “was the hottest smoking gun of all: the conversation about using the CIA to block the Watergate investigation.”

To the inevitable analysis why so ambitious, shrewd, opportunistic and talented a politician as Nixon behaved as he did, especially during his doomed second term, we will eventually need a comprehensive psychiatric treatise.

Weiner adds an epilogue about presidents who followed Nixon who “never seemed to learn,” citing Reagan’s proxy war in Central America and the Iran-Contra gambit, George W. Bush’s “abuses of power [which] dwarfed Nixon’s – secret prisons, sanctioned tortures and secret statutes.” Nor does he overlook Barack Obama who has “tormented more reporters and their sources under threat of subpoena or prison than Nixon’s ever did.”

And then his final angry and depressing note: “The last Americans to leave Saigon took neither peace nor honor with them. And we still go to war without knowing our enemies or the contour of the battlefield or the way out.”

Weiner’s indispensable book means, as the cliché goes, the more things change the more they remain the same.