The Cuba Embargo Has Actually Worked Like a Charm

Humberto Fontova holds an M.A. in Latin American Studies from Tulane University and is the author of five books, including Fidel; Hollywood's Favorite Tyrant, Exposing the Real Che Guevara and The Longest Romance; the U.S. Media and Fidel Castro. "The terms scoundrel and traitor should precede every mention of Humberto Fontova!" declares the Castro regime's official newspaper Cubadebate. For more info visit www.hfontova.com. 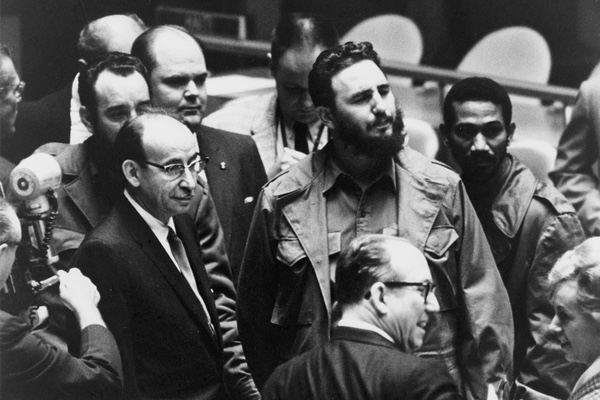 First item on the anti-embargo teleprompter: “But the embargo hasn’t worked. After half a century the Castro regime still stands. So why should we continue this failed policy?’

On January, 21, 1962 at Punta del Este Uruguay U.S. Secretary of State Dean Rusk gave a speech to the Organization of American States recommending the members join the U.S. in voting for an economic embargo of Cuba. In this speech there is not a single word--or even an inference--that regime-change was the embargo's goal. "The United States objects to Cuba's activities and policies in the international arena not its internal system or arrangements." Indeed, Secretary Rusk went out of his way to stress that regime-change was NOTthe embargo's goal.

In fact, many of the actual participants in Operation Mongoose--both American and Cuban-exile—finally became convinced they were risking their lives on mostly intelligence-gathering missions rather than in trying to decapitate the Castro regime.

"I will never abandon Cuba to Communism!" declared JFK while addressing the recently ransomed Bay of Pigs freedom fighters and their families in Miami's Orange Bowl Dec. 29, 1962. "I promise to deliver this Brigade banner to you in a free Havana!"

"That was the first time it snowed in the Orange Bowl," later wrote CIA man named Grayston Lynch who was in attendance. Lynch helped train many of the Bay of Pigs freedom fighters and he landed on the beach with them, firing the first shots of the invasion. Then -- from 1961-64 -- he led several dozen commando raids into Cuba, as part of Operation Mongoose. Probably nobody had the “hands-on” experience with the actual nuts and bolts of Mongoose as Grayston Lynch. The “snow” comment appears in Lynch’s book Decision to Disaster published in 1998, after years of analyzing the entire Mongoose matter, and obviously refers to the “snow job” JFK was pulling by claiming he’d help overthrow Cuban communism.

The famous hearings in 1975 by the Frank Church Committee into the CIA’s deviltry as alleged by Castro’s intelligence Colonel Fabian Escalante lend further credence to Lynch’s claims:

“ In August 1975, Fidel Castro gave Senator George McGovern a list of twenty-four alleged attempts to assassinate him in which Castro claimed the CIA had been involved…The Committee has found no evidence that the CIA was involved in the attempts on Castro’s life enumerated in the allegations that Castro gave to Senator McGovern.”

In brief, the U.S. was mostly trying to contain Soviet-Cuban sponsored international terrorism. And on very sound grounds: every terror group from The Weathermen to Puerto Rico's Macheteros, from Argentina's Montoneros, to Colombia's FARC, from the Black Panthers, to the PLO, to the IRA received training and funding from Castro.

Granted, while most were not immediately defeated they were certainly contained. Then for three decades the Soviet Union was forced to pump the equivalent of almost ten Marshall Plans into Cuba.This cannot have helped the Soviet Union’s precarious solvency or lengthened her life span.

Second item on the anti-embargo teleprompter: “But the Cold War’s over, for heaven’s sake! Why then continue this relic of that era?”

Because international terrorism still rages with slightly different sponsors and Castro’s Cuba is still prominent among them. A DEA report attributes half of the world’s cocaine supply to Columbia’s FARC (Fuerzas Armadas Revolucionarias de Colombia), the largest, oldest and most murderous terrorist group in our Hemisphere whose murder toll dwarfs that of Al Qaeda and ISIS combined and includes some murdered U.S. citizens. This same FARC thanks Fidel Castro for their immense fame and fortune. "Thanks to Fidel Castro" boasted late FARC commander Tiro-Fijo in a 2002 interview, "we are now a powerful army, not a hit and run band."

But let’s forward a bit even from there:Just last month Cuba (practically) got caught red-handed supplying Chinese-made arms to the Western hemisphere’s oldest biggest and most murderous terror-group, Colombia’s FARC. The terror-death toll from these Fuerzas Armadas Revolucionarias de Colombia (FARC) exceeds 200,000, and includes more U.S. citizens than have been murdered by ISIS.

So maybe it was a mere coincidence that the very week Obama planned to remove Cuba as a terror-sponsor the mainstream media blacked-out any mention of this blatant terror-sponsorship by Cuba in our own backyard.

Back in February, you see, Colombian authorities found 99 missile heads, 100 tons of gunpowder, 2.6 million detonators, and over 3,000 artillery shells hidden under rice sacks in a ship bound from Red China to Cuba that docked in the port of Cartagena, Colombia.

Most Cuba-watchers immediately guessed what was up. And just last month Colombian reporters (actually worthy of the name, unlike so many of ours) exposed the scheme. In brief:

*The arms were from a Chinese manufacturer named Norinco and the recipient was a Cuban company named Tecnoimport.

*But the ship stopped in the Colombian ports of Cartagena and Baranquilla (where the FARC is based, remember.)

* Colombia’s crackerjack newspaper El Espectator also reports that many Norinco-manufactured arms have already been captured from FARC guerrillas over the past ten years. This proliferation of Cuba-smuggled Chinese arms to the terrorist FARC got so bad that in 2007-08 the Colombian authorities even send a diplomatic protest note to the Chinese.

This awkward information at this awkward time, needless to say, might have hampered Obama’s plan to cleanse Castro from any taint of terror-sponsorship—assuming, that many people would have switched off the Kardashians to learn of it. Hence you’re only reading about it here at HNN.

Furthermore, last summer Cuba was caught trying to smuggle military contraband though the Panama Canal to North Korea, in what the UN Security Council itself denounced as the worst violation of the arms embargo against North Korea to date. The arms embargo was imposed in 2006 by the very United Nations.

Third item on the anti-embargo teleprompter: “But the embargo mainly punishes the Cuban people, and gives Castro an excuse for his economic failures and human rights violations.”

Well, why not ask the Cuban people themselves how they feel about it? Granted, polls are difficult to conduct in a Stalinist nation but every atom of observable evidence proves that the Cuban people actually want the embargo tightened.

In 2007, for instance Spanish pollsters conducted a clandestine poll in Cuba and found that less than a third of Cubans blame the U.S. "blockade" for their economic plight. In addition, Cuban dissidents almost en-masse condemn Obama’s loop-holing of the sanctions against the KGB-trained Stalinists who oppress them. “And now, the U.S. — our ally,” lamented Cuban dissident Guillermo Fariñas last month, “turns its back on us and prefers to sit with our killers.”

Cubans themselves have seen and felt it during the past few years: record foreign investment and record tourism to Cuba = enrichment of the Cuban regime and increased repression. The “libertarian” pipe-dream was blown to smithereens years ago. Alas, these dogmatists never bothered to poke their nose from their books on economic theory and look at the real world.

Fourth item on anti-embargo teleprompter: “But we trade with China, for crying out loud! So why not with Cuba?”

China’s (admittedly despicable regime) allows a genuine private sector, pays its bills and has lots of goods Americans want—even need. An American can do business with a Chinese businessman not directly affiliated to the Chinese government. Whereas Cuba’s constitution outlaws private property. Every business transaction and tourist expenditure in Cuba enriches the communist regime. As mentioned, the proof and verdict on this item has been in for years, for anyone who bothers to look.

Fifth item on anti-embargo teleprompter: “But why not try something new? At least President Obama is attempting a new policy.”

In fact every U.S. President—especially Republicans--since 1960 attempted an “opening” to Cuba. But most realized that no advantages whatsoever would accrue for U.S. interests or for those of the Cuban people. In fact Ronald “Evil Empire” Reagan probably went furthest in this regard, sending Alexander Haig to meet personally in Mexico City with Cuba's "Vice President" Carlos Raphael Rodriguez to feel him out. Then he sent diplomatic troubleshooter General Vernon Walters to Havana for a meeting with the Maximum Leader himself.

Castro, as usual, turned on the charm but Walters returned telling President Reagan that it would be Castro’s way or no way.

With our current President this Castroite attitude proved no impediment whatsoever, as already plumbed by some of Castro’s terror affiliates who are already gloating, snickering and rubbing their hands. Take Hezbollah leader Ammar Moussawi for instance: “The firmness of Cuba’s positions and the steadfastness and patience of the Cuban people has pushed the hand of US administration … the achievements of Cuba, which was firm on its principles, is a lesson for all people of the world who are suffering from American hegemony.”