Rick Shenkman is the editor of HNN and author of the forthcoming book, Political Animals:  How Our Stone-Age Brain Gets in there Way of Smart Politics (Basic Books, 2016). 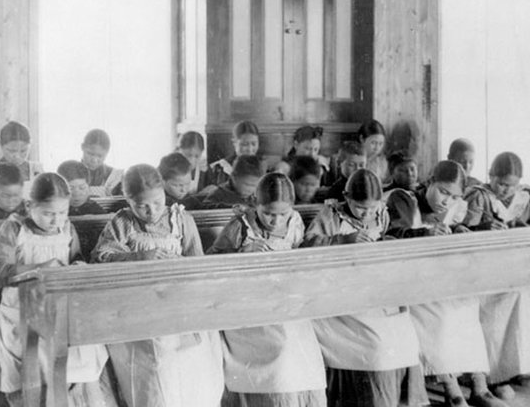 On June 11, 2015 the New York Times featured an op ed by novelist Thomas King complaining about the mistreatment of Canada's Indian population through the centuries.  The op ed followed the release of the Canadian Truth and Reconciliation Commission's conclusion that the country's policy of forcibly removing Indian children to attend state schools amounted to "cultural genocide."

The commission's release of its findings left King, who's has written several books about the mistreatment of Indians in Canada, feeling disheartened.  "There is every indication that the governmental song and dance around the critical and longstanding matters of land and treaty rights will continue," he observed, "and that native people will be left, once again, with vague and lumpy promises 'to consider the issues at a later date.' ”

Why was King cynical?  Because, as he explained, he's seen this movie before:

The Truth and Reconciliation Commission came into being as a requirement of the 2006 Indian Residential Schools Settlement agreement, itself a product of the largest successful class-action suit in Canadian history. It was not created out of any largess on the government’s part. Perhaps that’s why, when the commission’s 94 recommendations came to the floor of Parliament, the prime minister thanked the commission, noting simply that it “has spent a long time on this report” and that “it has issued a large number of recommendations.”

Which is the political equivalent of “so long and thanks for all the fish.”

Had this been a royal commission on tar sands development or a white paper on tax breaks for corporations, the recommendations would have been applauded, but as the report was on Canada’s native population, the folks in power were able to curb their enthusiasm, opting instead to wait to see the full report.

Just another day at the office.

Sure, that’s cynical, and I wish I were wrong. It’s just that the Truth and Reconciliation Commission’s report is not the first narrative of its kind. In 1907, Dr. Peter Bryce, the chief medical officer for Indian affairs in Canada, submitted a report, the results of which were buried by Ottawa until 1922, when Dr. Bryce published his findings as a book in which he called the health conditions at residential schools “a national crime.”

In 1928, Lewis Meriam released a report on similar residential schools in the United States. It concluded that they were crowded beyond their capacity, that disease was rampant, and that the rate of 11 cents a day for each native child was wholly inadequate. The report was so comprehensive and so damning that the United States never commissioned another such study.

Why ask the question if you know you won’t like the answer?

Only the Canadians persisted with such inquiries.

In 1966-67, the Hawthorn Report was published, reiterating the basic conclusions of the reports that had come before, while in 1996, the five-volume report of the Royal Commission on Aboriginal Peoples traced native and nonnative history.

The op ed drew 16 comments.  That is far below the usual number for an op ed tacking a sensitive issue involving race, class and social justice.  Most articles of this kind like one published the same day, "The Myth of a White Minority," draw hundreds of comments.