What Does the Film Leviathan Tell Us about Putin’s Russia and Its Past? 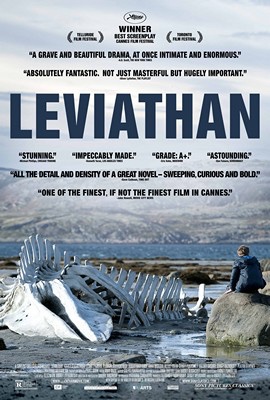 The Russian film Leviathan was nominated for the 2015 Oscar awards as best Foreign Language Film. Directed by Andrey Zvyagintsev, it tells us much about Russia under Vladimir Putin and its continuity with Russia’s past. Three main strands that weave themselves throughout the film are corruption, alcoholism, and Russian Orthodoxy’s relationship to the state.

The plot revolves around car mechanic Kolya and a corrupt small town mayor named Vadim. They live in a far northern coastal area—the film was shot on the Kola Peninsula (main city Murmansk), with the Barents and White Seas forming its coastlines. Kolya, his second wife, Lilya, and his teenage son, Roma, live in a picturesque, old wooden, waterfront house that Vadim as mayor expropriates in exchange for insufficient payment. When Kolya, with the help of his Moscow lawyer friend Dmitri (Dima), attempts to oppose this unjust expropriation, Mayor Vadim has Dmitri badly beaten and frames Kolya for a crime he didn’t commit.

It is not just coincidental that a picture of Putin hangs on the wall of Vadim’s office. For the Putin era—2000-2015, when he has been president or his protégé Dmitri Medvedev’s prime minister between 2008-2012—has continued a corruption tradition begun in the Soviet period and continued under Yeltsin in the 1990s.

Although the types of it have changed somewhat between the Soviet and post-Soviet years, the phenomenon itself has been consistent, especially since the years (1964-82) when Leonid Brezhnev headed the Communist party. My book A History of Russia quotes a source that wrote in 1982: “Massive and ubiquitous corruption at the district level of the party-state apparat has forged such close ties between it and the criminal world that there is every justification for saying that a system of organized crime has come into existence in the Soviet Union.” In regard to corruption of the judicial system, a Soviet dissident noted that among 424 known political trials in the decade following 1968, there were no acquittals in any of them. And a leading Soviet defense attorney wrote that in the post-Stalin years “judges who did not take bribes were a phenomenon so unusual as to be incredible.”

Like the mayor in Leviathan, Putin had experience in city government, acting as deputy mayor for a period in the 1990s in St. Petersburg. At the prestigious Kennan Institute in 2012, Professor Karen Dawisha gave a presentation entitled “Has Vladimir Putin Always Been Corrupt? And Does it Matter?” Dawisha concluded that in the early 1990s Putin was “the person to know in St. Petersburg” and that he was involved in much financial corruption.

In their excellent Mr. Putin: Operative in the Kremlin, Fiona Hill and Clifford indicate Putin’s “system,” which he began as deputy mayor: “Loyalty is ensured through blackmail. Corrupt, even illegal, activity will be kept secret as long as the individual continues to play the game. People are rewarded with money and other perks for working for and within the system and for performing well in the tasks that Mr. Putin has set out for them.” But if anyone betrayed Putin, the former KGB operative, was not reluctant to disgrace the defector. The authors conclude that “corruption (as viewed from a Western perspective) is the glue that helps keep Putin’s informal system together.”

The massive drinking and drunkenness of Kolya, his friends, and enemies that is so evident in Leviathan was also prevalent in the previous Soviet and Yeltsin periods. One scholar wrote that “at the end of the 1970s, an epidemic of mass drunkenness gripped the entire country,” and another expert estimated that in 1984–1985, Soviet per capita alcohol consumption for those over age 15 was about two and a half times as high as in the United States. During the 1980s, he thought that about one-sixth of the Soviet adults over age 21 were alcoholics (see here for source of references).

In 2009, President Medvedev stated: “Frankly speaking, alcoholism in our country has become a national tragedy…. Each person, on average (including children), annually consumes 18 litres of pure alcohol. If you convert this into bottles of vodka, it torments the soul!” Although there is some evidence to indicate that alcoholism has declined somewhat since Medvedev’s statement, it remains a major Russian problem.

But of the three major topics mentioned earlier in this essay, the treatment of Russian Orthodoxy’s relationship to the state is the most fascinating and complex. One recent article on that connection (posted on Johnson’s Russian List) has referred to the “critical role of the Russian Orthodox Church in helping to shape Russia’s current system, and in supporting Putin’s regime and publicly conflating the mission of the Russian state under Vladimir Putin’s leadership with the mission of the Church.” Putin has also frequently stressed the centrality of Orthodoxy to Russian history and values. As during the reign (1825-1855) of Tsar Nicholas I and later tsars, Putin wishes Orthodoxy to buttress up respect and support for the government and foster patriotism and other conservative values.

Leviathan, however, is critical of the church-state connection that exists in Putin’s Russia. This is most clearly seen in Mayor Vadim’s close relationship to the local bishop, who ends up utilizing Kolya’s expropriated property to build a new church. When a worried Vadim comes to visit the bishop in his plush office, he tells the mayor not to worry, that he’s doing the right thing, and adds, “We’re in the same business, but you’ve got your front, and I’ve got mine” (all quotes from the film are as found in the screenplay, which may vary slightly from the film’s sub-titled English translations).

He goes on to say that “our faith and our Motherland triumph again and again. . . . And when people destroy crosses, break icons, defile the Crucifix, and blaspheme by calling demonic rites a prayer, when people try to convince you that they do this out of the best intentions, they are trying to dress up lies as the truth. How can a person destroy the foundations of faith, the foundations of morality, and talk about preaching freedom?” The words “calling demonic rites a prayer” seems a reference to works like the female rock group Pussy Riot’s “punk prayer,” which contains the words “Virgin Mary, Mother of God, put Putin away” and mentioned “the Church’s praise of rotten dictators.” After singing the “prayer” in Moscow’s most prestigious cathedral, some members of the group were arrested and the incident was very much in the news in 2012 as Leviathan was being shot—in the film the words Pussy Riot appear briefly on a television screen.

In an excellent film review in the journal Kinokultura, interviews with director Zvyagintsev and other materials provide further clarification of what he wished Leviathan to convey about Russian church-state relations. He wanted it to attack church hypocrisy and dogmatism, and he’s quoted as saying, “Taking gifts from people who are breaking the law, stealing and committing various excesses—after all they really do know from whose hands they are accepting these gifts; watches worth tens of thousands of dollars, convertibles and chapels, is this not falsehood before our Creator?! . . . Think what Christ would have done if he had come into the study of such a priest.” Zvyagintsev also believes that the church should be completely independent from the state and expose evils committed by it.

Although this essay has heretofore concentrated on three important topics that the film treats, there is much more to it than that, for example, excellent acting and visual shots, an action-packed story, and a wonderful mix of realism and symbolism, tragedy and comedy. To take just one example, near the end of the film when bulldozers demolish Kolya’s house they seem like prehistoric monsters, reinforcing the symbolism of the Leviathan, which was a biblical sea monster appearing in the book of Job and the title of Thomas Hobbes’s famous seventeenth-century book arguing for the necessity of an absolute ruler.

Like the best films and literature, like the works of Zvyagintsev’s fellow Russians Gogol, Dostoevsky, Tolstoy, Chekhov, and film director Tarkovsky, Leviathan speaks universal truths. In an interview Zvyagintsev related how his film had been influenced by a story about a Colorado man, “a little person,” who had gone up “against the government machine” in a property dispute that ended tragically. The more Zvyagintsev thought about it, the more he “realized that the story could take place anywhere,” and he made it into a Russian story.

In the Kinokultura review mentioned above, the reviewer alludes to numerous other similar stories from other countries, some of which influenced Zvyagintsev. From the Biblical story of Naboth’s Vineyard, through fictional accounts by Heinrich von Kleist, Franz Kafka, Gogol, and Dostoevsky, to the modern Chinese film A Touch of Sin, the universality of ordinary people being victimized by corrupt government officials is demonstrated.

In his sermon, the bishop quotes the medieval Russian prince and Orthodox saint Alexander Nevsky saying “God lies not in strength, but in truth,” and the bishop then elaborates on how important truth is, but his actions indicate he is a hypocrite. In one of his interviews, Zvyagintsev also spoke of the importance of truth, “artistic truth,” and Leviathan is full of it. In its mix of tragedy and comedy, in its depiction of common human foibles—in one scene Dmitri tells Lilya, with whom he is having an affair, “Everybody is guilty of something”—Leviathan reminds me of some of the best works of Chekhov, who understood the human condition so well.

As might be expected, many Russian officials and churchmen have criticized Leviathan. As Masha Lipman mentiones in the New Yorker, Russia’s minister of culture, Vladimir Medinsky, has spoken out against films “defiling the national culture, creating a threat to national unity and undermining the foundations of the constitutional order.” He obviously believes Leviathan is such a film, and he has also objected to its use of profane language, which Zvyagintsev has been forced to remove before the film could be distributed in Russia.

As Lipman observes, although the Russian government’s treatment of the film has not been as harsh as that of Boris Pasternak’s novel Doctor Zhivago in the late 1950s, the objections and restraints against it are “strongly reminiscent of Soviet times.” Thus, not only the film itself, but also the Russian treatment of it provides insights into Russia’s present and past.