Could a Movie Help Lead to the Departure of Scotland from the UK? 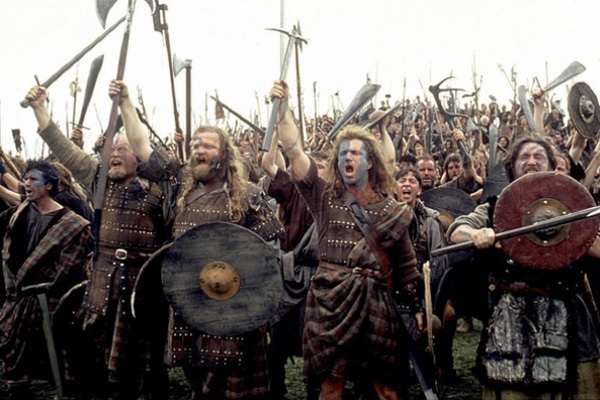 Among the surprising results in the United Kingdom’s elections on May 7 was the striking success of the Scottish National Party. The SNP won 56 of Scotland’s 59 parliamentary seats. In some important respects, the nationalists’ prominence in Scotland can be attributed to the popularity of a Hollywood movie, Braveheart. That film, directed by Mel Gibson (and starring the actor), gave new energy in 1995 to the Scottish separatists’ campaign for independence. Now, three decades later, demands for self-rule threaten to dismember the United Kingdom.

Braveheart is just one among many generators of nationalist ardor in Scotland, and it is certainly not the principal stimulus to Scotland’s separatist movement. But the movie’s impact on politics in the British Isles is a significant chapter in the recent history of Scotland’s extraordinary political transformation.

Braveheart drew attention to Scotland’s mythic hero, William Wallace. Much of modern-day knowledge about William Wallace comes from a 15th century poem by Blind Harry. That document served nicely as a springboard for cinematic storytelling. It gave the screenwriter, Randall Wallace, abundant opportunities to exercise artistic license. In the tradition of Hollywood’s epic historical dramas, Randall Wallace populated his story with heroes and villains. He designed a morally uplifting tale about poor Scottish commoners struggling against the rich and powerful English. Some wealthy Scots are villains in the screenplay as well, since they profit from alliances with the English. Braveheart shows Scotsman William Wallace leading a rebellion against English domination after his wife is raped and executed. Many Scots join him in the fight. Eventually Wallace is betrayed. Rejecting an offer of mercy before his execution, the defiant hero shouts “Freedom!”

Some scholars, movie reviewers, and politicians blasted the production for historical inaccuracies. They criticized the writer and director for demonizing of the English and presenting a simplistic, rose-colored perspective of William Wallace and his soldiers. Allan Massie, a conservative Scottish journalist, vilified the screenplay, claiming, “It would be a perversion of truth to call [Randall Wallace’s] way with history cavalier. He has no way with history at all.” Detractors pointed out, for example, that Braveheart shows William Wallace having an affair with Isabella, Princess of Wales, yet Isabella did not arrive in Scotland until a few years after Wallace’s execution. Additionally, kilts and other apparel worn by Scottish fighters in the movie did not come into fashion until centuries later.

Many Scots cared little about historical inaccuracies. They loved the movie’s story about a righteous struggle. Scottish audiences cheered during the screenings and gave the movie a standing ovation when it ended. Books about Scottish history sold vigorously after the film’s release. Thousands of Scots from around the world traveled to Stirling, Scotland, where Wallace’s famous victory occurred. A few months after Braveheart’s screenings, a headline in the Glasgow Herald reported, “Labour’s Popularity Plummets, SNP [the Scottish National Party] Rides High on Back of Braveheart.” It was an early sign of the election pounding the Labour Party received this year in Scotland.

Alex Salmond, principal leader of the Scottish Nationalist Party, observed that the movie created a “sea-change” in public attitudes. Before 1995, Scotland’s nationalists enjoyed occasional gains, but they could not make steady progress. Some Scots favored a proposal for devolution in 1979 aimed at creating a Scottish Assembly, but that proposal failed to attract sufficient voter support. Margaret Thatcher’s election victory in 1979 made the nationalists’ situation difficult. Thatcher and her allies staunchly opposed the separatists’ cause. Many left-oriented Scots viewed Thatcher’s brand of free-market economics with disdain. They blamed her conservative policies for accelerating the decline of the Scotland’s industrial heartland.

In 1995 Scottish nationalists faced a difficult political environment, but leaders of the SNP detected rich opportunities for a fresh start when Braveheart arrived at local theaters. They stood outside the movie houses, handing out pamphlets and postcards that associated their campaign with the film. One of their leaflets said, “You’ve seen the movie . . . now face the reality.” Alex Salmond, the SNP’s leader, referred to Braveheart often when speaking to the public. Salmond announced he was “head and heart” with William Wallace.

For awhile, it looked like members of the Labour Party could successfully put out the flames of local nationalism by offering concessions to the Scots. In the late 1990s, Prime Minister Tony Blair rewarded Scottish political allies with a promise of “devolution.” The Scots opened their own Parliament in 1999. Nevertheless, calls for independence turned louder in the early 2000s, and the question of independence came up for a vote in 2014. The nationalists lost, receiving approximately 45%, while the pro-union forces garnered 55%. Then, in the elections of just a few weeks ago, resounding victories by the Scottish National Party showed that the question of independence had not been settled. “By Friday morning,” reported the New York Times, “Scotland and England looked and felt like different countries, and many wondered whether a breakup had become inevitable.”

It remains to be seen whether the Scots can achieve independence, but Braveheart surely gave their separatist movement a powerful lift. Before the movie’s appearance in Scotland, the nationalist cause had been substantially marginalized. After the film excited intense local interest in Scottish history and culture, talk about independence amplified. Braveheart’s impact on the people of Scotland reveals the potential of film to shape public opinion and agitate national politics.