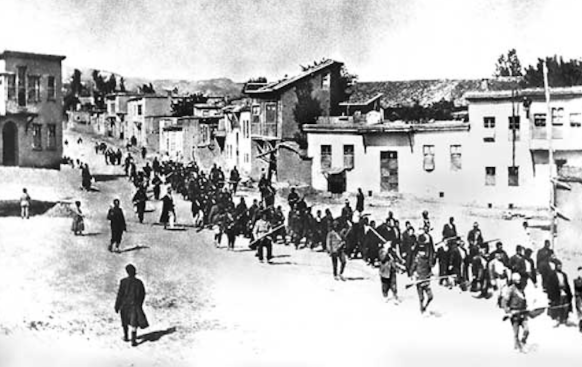 Armenians being marched to a prison by armed Turkish soldiers (Wikipedia)

The US Council of Muslim Organizations (USCMO), which describes itself as "the largest umbrella group of mainstream Muslim American organizations," says an independent investigation is needed of the claims that Turkey is responsible for the slaughter of Armenians in 1915.  The event is being commemorated this week on the 100th anniversary.

In a press release USCMO says "characterizing the events of 1915 as genocide without proper investigation of these events by independent historians will not only jeopardize the establishment of a just memory pertaining to these events, but will also damage the efforts aimed at achieving reconciliation between Turks and Armenians."

The statement goes on to say that the United States should be mindful of Turkey's important role as the only Muslim member of NATO: "[W]e are concerned about alienating a key ally, Turkey, through one-sided declarations that political and religious leaders have made on this subject. The events of 100 years ago should be based on a consensus among historians and academicians with access to archives and documents from that era."

The statement immediately came under attack by scholars and activists.  Twitter lighted up with comments critical of USCMO. 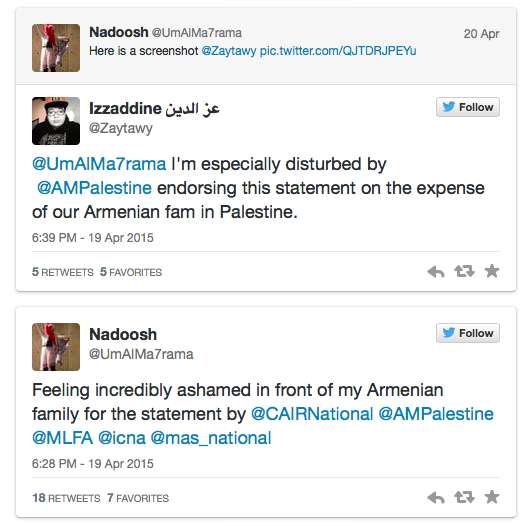 On Mondoweiss, a website sympathetic to Palestinians, a graduate student at Brown University, Sami Sulaiman, condemned USCMO for hypocrisy:

If Armenian-American college students felt betrayed in the past day, I would not blame them. So many of them came out to support student resolutions at several universities across the country demanding divestment from the Israeli occupation. And yet, one of the largest American Palestine solidarity organizations in this country just told these students that their grandparents’ stories still need to be verified. If you do not know what I am referring to please read this statement put out by the United States Council of Muslim Organizations.

In this statement, member organizations of the USCMO, including American Muslims for Palestine, make the case that President Obama should not refer to the “events of 1915” as a genocide without further investigation. They call for a more “balanced” approach through academic consensus based on Turkish archives that Turkey refuses to open to establish a “just memory.” The statement also refers to the importance of Turkey as an ally in the fight against ISIS. What is even worst is that it was released on the eve of the 100th anniversary of the genocide.

How American Muslims for Palestine does not recognize the moral hypocrisy of such a denial is beyond me. Palestinians as a people have spent decades demanding the world recognize our ethnic cleansing from our homeland. For years, it was the stories of our parents and grandparents against the denial of the entirety of Israeli society. Even after the opening of Israeli state archives (that only Israeli academics had access to) confirmed what we have always known to be true, we still fight to have the Nakba and our right to return recognized. On top of all this, AMP must have forgotten that there are Armenian-Palestinians who survived this genocide.

What kind of logical acrobatics did AMP have to undertake to avoid seeing the moral hypocrisy of this statement?

Academic historians long ago concluded that Armenians were in fact the victims of genocide.