The Lesson of Laki We’d Be Crazy to Ignore

by Alexandra Witze and Jeff Kanipe

Alexandra Witze and Jeff Kanipe are science journalists in Boulder, Colorado. Witze is an earth-sciences correspondent for Nature magazine, and Kanipe is an astronomy writer whose books include Chasing Hubble’s Shadows. They traveled to Iceland several times to research their new book "Island on Fire: The Extraordinary Story of a Forgotten Volcano that Changed the World," out now from Pegasus Books. 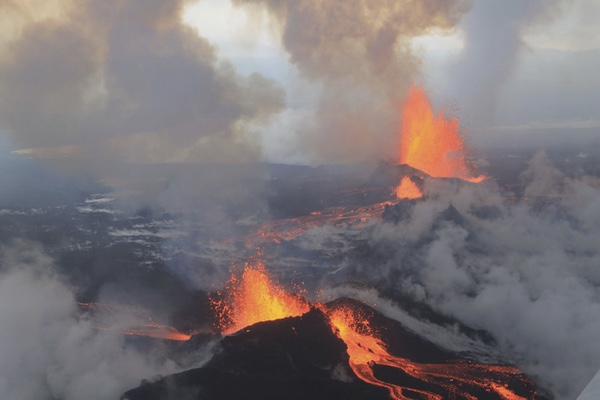 Eruption of Bárðarbunga at Holuhraun, September 4, 2014

The morning of Sunday, June 8, 1783, dawned with gold light and long, soft shadows across southern Iceland. In the village of Kirkjubaejarklaustur, a picturesque town known for its 12th-century convent, people were just beginning to stir. Most were planning to attend church services, for it was Pentecostal Sunday. It looked to be a stunning day, with the high Arctic sun playing over lush pasturelands dotted with sheep and lambs, their muzzles deep in grass and summer wildflowers. 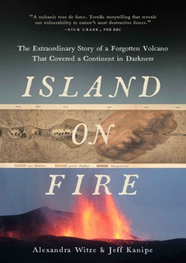 Around 9 a.m., the pastoral morning took a dark turn. An enormous black cloud appeared above the foothills to the north. Within minutes, the darkness swept across town, blocking out the sun and driving everyone indoors. The air smelled foul. Ash rained down like soot from the sky. Anyone caught outside had to grope their way home in the blackness, and those inside had to light lamps to see in the gloom.

At the time, no one knew that the source of the noxious cloud was the eruption of a new volcanic fissure, some 45 kilometers away. Later, scientists would marvel at this enormous rent in the ground and give it the name Lakagígar, or the Laki craters.

The craters would go on to erupt for eight solid months, showering ash and death across the people of southern Iceland. Lava flows buried many of the once-tranquil farms and nearly swallowed the town of Kirkjubaejarklaustur itself. Toxic ash poisoned the grass and then the livestock, leading to massive famine. Ten thousand Icelanders, or one-fifth of the country’s population, would eventually die in what came to be known as the Hardship of the Mists.

But this was not a localized calamity. The Laki eruption would have an unprecedented global impact. It poisoned the air across Europe, sending a whitish acidic fog that curled its tendrils from Iceland all the way to the continent. In England, naturalist Gilbert White wrote of the “amazing and portentous summer” of 1783, when an unnatural haze scorched blades of wheat in nearby fields. In the Netherlands, physicist S.P. van Swinden described a sulfurous stench “crawling through everything, even closed houses.” And in France, Benjamin Franklin — serving as the emissary of the new United States, to hammer out a peace treaty with England after the Revolutionary War — finally made the scientific link and proposed that a volcano in far-off Iceland was to blame.

The effects of the Laki eruption were long-ranging. Although no one knew it at the time, the volcano had spewed a veil of sulfur high into the atmosphere, where the particles spread out and acted as a sunshade to reflect sunlight back into space. Across much of the northern hemisphere, the winter of 1783-84 descended into misery. Many European rivers froze, only to unleash destructive floods in the spring thaw. Then, unexpected summer frosts wreaked havoc on crops. Laki cooled the northern hemisphere by more than a degree Celsius for several years, enough to knock society for a loop. Some scholars have linked the Laki eruption to crop failures in France, and blamed the volcano in part for the 1789 French Revolution. Laki’s cooling particles even shut down the African monsoon, the storms that bring much-needed rains to areas like the Nile valley. Starved of those waters, Egypt descended into famine. In the end, more than 1.5 million people may have died from the indirect effects of the Laki eruption.

Environmental scientists are fond of pointing out unexpected linkages between the physical world we live in and our well-being. The Laki eruption of 1783-84 showed how a volcano in a remote part of the world can dramatically change lives everywhere, from rural Icelandic farmers to the most sophisticated capitals of Europe.

We learned this lesson again in 2010, when a different Icelandic volcano erupted, not too far from Laki. Just as Laki’s gases had drifted toward Europe, so too did ash from Eyjafjallajökull. Worried that the volcanic ash would clog jet engines, aviation officials grounded commercial flights for days, impacting 20 countries and 10 million travelers and costing the aviation industry nearly $1.7 billion.

Even today, the lessons of Laki echo around Iceland. In August, a third volcano, called Bardarbunga, began erupting along a long fissure in the ground just as Laki had done 231 years earlier. It too spewed poisonous sulfur gases. Though the Bardarbunga eruption is putting out less gas than Laki did, air pollution levels have spiked dangerously across the country, and people who are old or have breathing problems have been told to stay inside. The Bardarbunga eruption has continued for more than 100 days, and it shows no signs of stopping.

Only sheer luck has kept this latest eruption from wreaking larger havoc. Had it been a larger eruption, something on the scale of Laki in 1783, it would have made the 2010 experience look like child’s play. Imagine an entire modern continent struggling to cope with a stream of toxic gas. There is no precedent for such a volcanic medical emergency.

What Laki tells us is that not only can volcanic disaster happen again, but that it almost certainly will. This matters not only for Icelanders, or those living right next to volcanoes, who are at risk from planetary fire, but for all of us around the world.